I Lost My Mother to COVID-19. Don't Let Anyone Tell You It's Not Something to Fear

I woke up on Oct. 2, my mother’s first birthday since she died of COVID-19 in May, to the news that the President of the United States had tested positive. Unbelievable. And yet totally believable.

The man who made fun of his opponent for wearing masks, who downplayed the risks of the virus to the American public, who said it would just go away “like a miracle” now had contracted the virus himself. And the whole world found out on my mom’s birthday.

I knew, as my mother’s birthday weekend approached, that it would be painful. I could not have predicted how much anger would mix with my sadness. But with each new revelation, I became increasingly furious.

The President, it now seems, not only did not follow protocol when he knew he had been exposed to the virus but continued to interact with others when he was already exhibiting symptoms. When news came out that he was receiving a combination of experimental medications, including Remdesivir, early on with only reportedly mild symptoms, I thought about my mother waiting in the ICU for the drug. Remdesivir got its emergency approval the same week she was diagnosed with COVID-19, but because the government botched distribution, it would be two weeks before she got her first dose. She died two days later.

When former New Jersey governor Chris Christie, one of a growing number of people in Trump’s orbit who tested positive, checked himself in to the hospital “out of an abundance of caution,” I thought of all people who were turned away because of overcapacity and didn’t get the care they needed.

As the nation stood by for news of the President’s condition, I thought about calling the nurses’ station every day, then waiting for the doctors to call us back with updates because, of course, we couldn’t be there.

When the President, still being treated for a highly infectious illness, left the hospital for what was essentially a parade, putting the lives of his Secret Service agents at risk, I thought about how after my mom went to the hospital, I never saw her again, how I told her I loved her on FaceTime, crying and clutching my phone because I couldn’t hold her hand.

Tens of thousands of Americans have stories like this—relatives unable to be admitted to hospitals, medical providers who didn’t have the right drugs on hand, goodbyes said from a distance. I know that even with the best level of care (and she still got a better level of care than many people have access to in this country), my 64-year-old immunocompromised mother still could have died. I also recognize that the President is going to get a different level of attention than any other citizen. And yet understanding how the world works doesn’t make it less hurtful.

Perhaps if the U.S. had worked to protect its citizens the way that countries with far fewer resources have, I wouldn’t feel this way. But Trump and too many other politicians around the nation exhibited a disregard for the lives of their fellow Americans, flouting and even mocking public-health guidance. They pushed to open the economy even though it meant more people would get sick and die. They cheered on anti-lockdown protesters. They opposed mask mandates. Then when they got sick themselves, they got treatment that’s out of reach for so many.

Before Trump left Walter Reed medical center, he tweeted that he felt better than he did 20 years ago; he urged his followers not to be afraid of COVID-19. “Don’t let it dominate your life,” he wrote.

It was yet another jab to the heart. Nothing will bring back my mom or the more than 210,000 other people in the U.S. who have died of COVID-19, but to those of us who have lost someone to this horrible virus, the tweet betrayed not just indifference but a willingness to let the death toll grow. 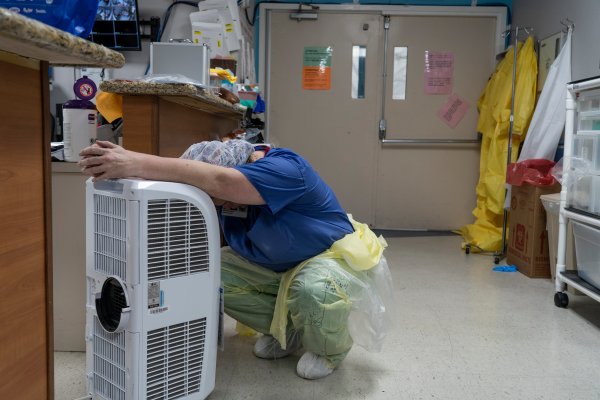 Doctors and Nurses Are Getting COVID-19 Burnout
Next Up: Editor's Pick