'Everybody Needs a Break.' Fleetwood Mac Skateboarder Reflects on His Viral Fame and Helping People Chill Out for a Bit

Less than two weeks ago, using the words cranberry juice, skateboarding and Fleetwood Mac in the same sentence might have only seemed possible in a game of Mad Libs. But thanks to Nathan Apodaca, or as he’s known on TikTok, 420doggface208, they’re now synonymous with one of the best viral videos of 2020.

The Sept. 25 clip—which has racked up over 35 million views on TikTok alone—features Apodaca filming himself leisurely skateboarding down a highway while sipping Ocean Spray cran-raspberry juice straight from the bottle and lip-syncing to Fleetwood Mac’s classic 1977 song “Dreams.” (The song has since captured its biggest streaming week ever and shot to No. 1 on iTunes.)

There are no special effects or hidden messages in the video. It’s simply a study in “good vibes only.” But as far as Apodaca’s concerned, that’s the reason it’s resonated so strongly with people.

“It’s a time in the world right now where everybody needs a break from everything that’s going on,” he says. “This video took them to a place where they could watch something and just chill and vibe out.”

When he posted the TikTok—which he filmed in one take—on his way to work at Circle Valley Produce, a potato processing plant in Idaho Falls, Idaho, that Friday morning, Apodaca had no idea how much sharing his good vibes with the world would end up changing his life. In fact, he says he almost didn’t post the video at all.

“I was getting ready to post but then I didn’t think I was going fast enough [in it],” he says. “[I thought] everybody was going to laugh at me and be like, ‘Oh look, he’s scared to go fast.’ But then I liked the way it looked. It was smooth. So I was like, I might as well just post it and see what happens in an hour or two.”

By the end of the work day, Apodaca says the video had already broken one million views—a mark hit far, far quicker than any of his previous videos. But it wasn’t until he started to get messages from his mom and aunts saying they had seen it that he knew he truly had a hit on his hands. “When I started getting notifications from my mom and everybody, I was like, ‘OK…what’s going on here?'” he says. “It was crazy.”

In the days since, Apodaca’s video has inspired others, including Mick Fleetwood, the rock band’s eponymous co-founder, to take part in the newly-minted “Dreams” Challenge by recreating the iconic clip.

“When Mick did it, that was insane. My mom was like, ‘Do you know who he is? Do you realize what just happened?'” says Apodaca, noting that he was indoctrinated into the Fleetwood fandom at an early age. “[My mom and aunts] are beyond fanatics. They’re the ones who introduced me to them growing up.”

But viral fame has altered Apodaca’s life in ways that go beyond online notoriety and being recognized at his local Walmart. Thanks to Venmo, PayPal and Cash App donations from his fans, or as he calls them, his “soldiers,” Apodaca has received over $20,000 in recent weeks.

“The highest donation was $200,” he says. “I was like, how can somebody be sitting at home and just say, ‘I’m going to throw this dude $200,’ you know? Before, I would’ve had to work at the warehouse for three or four days for that. So it’s a blessing. I thank everybody for that. I mean, there are no words.”

His merch line, which he started on his own prior to any of this, is also earning him some extra cash. “The good thing is that I don’t have to make [the merch] anymore. I’d been making my own beanies,” he says. “I bought an embroidery machine and got a four-hour tutorial from [my girlfriend’s] niece on how to use it…The next day, I got some good quality beanies, figured out the machine and started pushing those myself.”

After giving his mom $5,000 and buying his dad a truck, Apodaca, who’s been living in an RV in his brother’s front yard, is now looking to make a down payment on a house. “I’m talking to an Idaho realtor,” he says. “He’s doing his best to get me into a place.”

On Tuesday, Ocean Spray also gifted Apodaca with a new truck of his own (the bed of which was filled with his favorite juice) to replace the unreliable ride that forced him to skateboard to work in the first place.

“Sometimes my car just shuts off if I turn or hit the gas a certain way and then it won’t start unless I get a jump,” he says. [The morning I filmed the video], it went out and I was like, I’m not going to sit here and wait to flag somebody down. So I grabbed my board—I always have it with me in the car just in case—and my juice and I started heading to work.”

Looking ahead, Apodaca says he’s just excited to see what opportunities the next year brings—whether that means “relaxing and chilling” or potentially collaborating with Travis Scott.

“I’m hoping for good things,” he says. “I’ve never even been on a plane. So it’s an exciting adventure, and I’m just ready to go.” 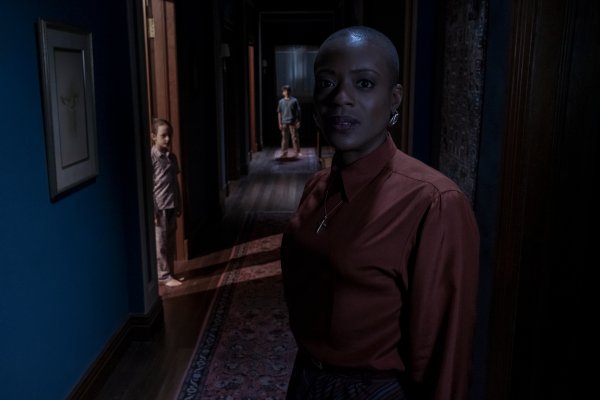 In Netflix's Slow-Burning The Haunting of Bly Manor, the Real Ghost Is Inequality
Next Up: Editor's Pick