Would You Date Someone With Different Political Beliefs? Here's What a Survey of 5,000 Single People Revealed

TIME
Ideas
By Belinda Luscombe
Luscombe is an editor-at-large at TIME and the author of Marriageology: The Art and Science of Staying Together.

To the long list of institutions with which America’s current political divisions are messing, we can now add dating. There has been, according to reports from several corners, a sharp increase in the number of single people who would simply decline to date anyone who did not share their political persuasion. Increasingly, people who want to eventually head down the aisle are reluctant to consider doing it with someone from across the aisle.

This growing distaste has been in the air for some time. But Match, the big cheese of the matchmaker websites, put some figures to the feelings when it released the tenth of its annual Singles in America reports on Oct. 6. According to its survey, the number of people who are looking for a partner but believe it’s not possible to date a person of the opposite political affiliations had risen from about a third in 2012 to more than half in 2020, with a 4 percentage point increase just in the last 12 months.

Research from Pew in April already suggested that having voted for President Trump would be a dealbreaker for more than 70% of Democratic voters and having voted for Hillary Clinton would turn off 47% of Republicans. But on strictly party lines, the distinctions were less stark; fewer than half of Democrats would spurn a Republican for his or her party affiliation alone, and fewer than a quarter of Republicans felt that way about Democrats.

More recently, a YouGov/Economist poll in September found that half of Republican voters and 40% of Democrat voters wouldn’t mind if their child married someone from the opposite party. But 45% of the poll’s respondents would not date someone from the opposite party themselves—and the vast majority of them (86%) think it has become tougher to date someone on the other side of the political divide.

The Match figures make the trend lines a little clearer. A full three-quarters of the study’s 5,000 respondents, who were not all Match members but were all single, said that it was important for their partners to share their political beliefs. Only half of the survey participants felt that it was so vital as recently as three years ago. And before that, the numbers hadn’t budged since the study began.

Helen Fisher, a biological anthropologist and consultant for Match who has helped compile the survey for the past decade, says the size of the uptick is a little worrying, because it means people are overriding their primordial urges to reproduce. “Finding a reproductive partner is the most important thing we do in our lives,” says Fisher. “People who are madly in love are normally willing to overlook anything.”

The Capulet-Montague divide between the political sides is also concerning to Bradford Wilcox, sociology professor and the director of the Marriage Project at the University of Virginia. “We know that marriage is one of the key markers of social solidarity,” he says. “The rise of polarization in dating means we’re headed in the direction of greater balkanization.”

Some, however, see the political love gap as part of a longer trend. Philip Cohen, a sociology professor at the University of Maryland, College Park, is not surprised that people are seeking political similarity in their intimate relationships. “Rising partisanship may be a relatively recent phenomenon, jet-propelled by Trump’s entry into politics,” says Cohen. “But it is primed by the long-term trend toward partnerships that are emotionally as well as sexually and financially fulfilling,” what Northwestern University psychology professor Eli Finkel calls the all-or-nothing marriage.

Cohen also points to practical considerations: how do you choose what news to watch or what friends you can group together? “In the current period, when people are embedded in social and informational bubbles with like-minded friends and relatives,” he says, “the idea of partnering with someone from a different bubble is understandably daunting. At a minimum it’s awkward and complicated.”

There are even divides within the political divides. Match’s figures show that in general Democrats were more eager to learn about their dates’ political views. Gen Z Republicans, those born between 1997 and 2012, were the least comfortable telling potential partners which way they leaned politically, while Boomer Democrats, especially the men, were fine with it.

In possibly related news, Match’s results also indicate that single people weren’t having much sex. Seven out of 10 of its survey-takers had not had any nooky since the beginning of the pandemic—which also may be because it’s quite tricky to have sex with someone while staying six feet away from them. For those that did get it on, pickiness about partners didn’t seem to be front of mind. A quarter of them had sex with their non-romantic roommate; 11% had not had hooked up with that person before.

Correction, Oct. 7
The original version of this story misstated the company’s name. It is now known as Match, not Match.com. 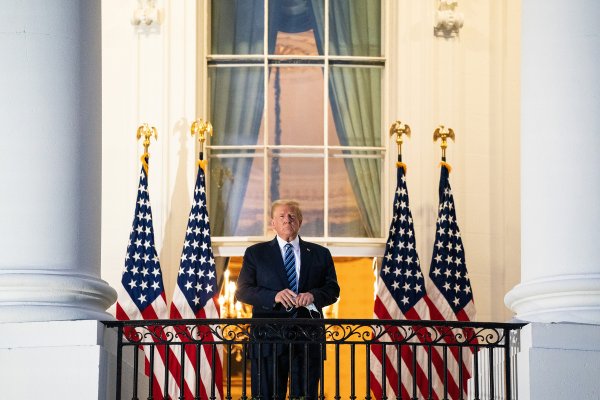 Donald Trump Is Not Pro-Life
Next Up: Editor's Pick