Can We Joke About the President Having COVID-19? Late-Night Comedy Can’t Decide

Pity the comedy writers. Oh, sure, the Trump era has provided them with plenty of fodder for jokes. Powered by the twin engines of vulgarity and self-involvement, the President’s public persona isn’t hard to mock. And we haven’t had a slow news day since, what, 2015? But every once in a while, the Commander-in-Chief gets himself—which is to say, the whole United States, if not the world—into a situation that is extremely delicate to discuss yet also impossible to ignore. Such has been the case since early Friday morning, when Trump tweeted that he and the First Lady had tested positive for COVID-19. Hours later, TV’s most pressurized late-night writers’ rooms were faced with the question: is the President’s potentially fatal illness funny?

By that time, the same debate was already raging on social media. Left-of-center personalities ranging from the verified and professional to the anonymous and unaccountable tussled over whether Trump’s mishandling of the pandemic justified the schadenfreude, or if civility dictated a sympathetic response from those who’d suffered as a result of his COVID skepticism. Mainstream Democrats mostly defaulted to Michelle Obama’s signature “when they go low, we go high” approach. (Never mind that the far right was sniffing around for a Democratic conspiracy.) “God bless the president and the first lady,” Rachel Maddow tweeted. “If you pray, please pray for their speedy and complete recovery—and for everyone infected, everywhere.” Despite the fact that POTUS could have exposed Joe and Jill Biden to the virus at Tuesday’s debate, the former Vice President sent well wishes to the Trumps. His running mate Kamala Harris followed suit.

These were easy enough sentiments for politicians and pundits to express, regardless of whether the magnanimity was genuine. But comedy demands critical analysis, which in turn yields value judgments. A bit can feel cruel when it’s perceived as kicking a person when they’re down. Punching up at a powerful villain, however, tends to read as righteous. The diversity of this weekend’s attempts at humor from TV’s overwhelmingly liberal late-night comedians reflected a wide range of perspectives on which category Trump’s battle with COVID fell into—if it was simply taunting a seriously ill person, or speaking truth to power, or a little bit of both.

Some talk-show hosts barely diverged from the somber tones of their cable-news counterparts. Late night’s gentlest voice, Stephen Colbert, was supposed to be taking Friday off but decided, in response to the extraordinary news, to throw together a last-minute Late Show episode. “This is a serious moment for our nation,” he said. “And we all wish the President of the United States and the First Lady a speedy and a full recovery.” Colbert urged viewers to put schadenfreude aside, to “separate the man from the office” and to think of the service members enlisted to fly Trump to Walter Reed. He managed a few mild jokes about the White House’s negligence (“A lot of people are calling [Trump’s diagnosis] an October surprise. I think it’s more like an October well, yeah”). But in the end he settled on a message so simplistic and self-congratulatory, it verged on condescending: “I, for one, take no pleasure in Donald Trump being sick. Because, like him or not—and for the record: not—he is the President. It is his job to run the country. That’s a tough job for anybody. And now he’s gotta do it while he’s sick.”

Middle-of-the-road hosts like Jimmys Kimmel and Fallon qualified poker-faced summaries of the news with the caveat that you wouldn’t wish the virus on your worst enemy and added a tentative jab or two. And The Daily Show’s Trevor Noah, on YouTube, struck a sanctimonious tone. “As a comedian, I’m not gonna lie, my first instinct was to make jokes—jokes about how a 74-year-old man who doesn’t eat vegetables and eats way too much meat is literally the kind of person corona puts in its dating profile,” he said. Instead, he decided to take the high road and use Trump’s illness as an excuse for a pro-mask PSA. “If the President of the United States can get the coronavirus, then what excuse do the rest of us random a–holes have for not wearing a mask?” Noah asked, reminding us of all the security and technology the White House has at its disposal. “People, coronavirus doesn’t care about your politics.” True enough, but how much overlap could there possibly be between anti-maskers and Daily Show viewers?

At the opposite extreme was Showtime’s reliably irreverent Desus & Mero, who didn’t even pretend to couch their humor in righteousness. Desus Nice opened Sunday’s segment on the Trump news with a sustained fart noise; his co-host The Kid Mero simply burst out laughing. They had jokes about what a bad week Melania was having; how Trump could easily work through his convalescence because all he does is tweet anyway; how he arguably tried to blame the virus’ spread among his staff on military and law enforcement; and how, following reports that he was being treated with experimental drugs, the President was going to return with Incredible Hulk arms. The funniest bit framed this nightmare year as an endless soap opera, with Hope Hicks’ reemergence in the headlines as a wild twist. (Desus: “They came back with a character from season 2 of 2020!” Mero: “I’m back and I’m evil!”) Perhaps the farthest-left talk show airing on TV, hosted by two Black men from the Bronx—the borough hit hardest by corona during the brutal early months of the pandemic in New York—Desus & Mero has been a welcome source of catharsis in a year defined by the trifecta of Trump, COVID-19 (which has disproportionately affected minority communities) and police violence against Black Americans. Their bluntness may not be for everyone, but I wouldn’t accuse them of being too hard on a President who, last month, shrugged off tens of thousands of “blue state” deaths.

Still, I think the most elegant responses explicitly acknowledged the difficulty of discussing Trump’s predicament. Peacock’s Amber Ruffin opened her second-ever show, on Friday, with a clever monologue that juxtaposed the host’s sarcastic well wishes (“I joke a lot about Trump, but I just wanna say that the coronavirus is very serious. It’s unfair that Trump caught it because he’s always taken the virus very seriously. And he’s taken every precaution”) and reminders of the “7.31 million other Americans who’ve caught the virus” with clips of Trump’s most harmful utterances about COVID (“It’s going to disappear one day, in just a miracle”). In this scenario, Trump isn’t simply the target of the joke—he also unwittingly provides the punchline.

Saturday Night Live went even further in deconstructing the comedian’s dilemma. The show has struggled with political humor in the Trump era, when the crassness of reality can obviate the need for satire, and this week’s season premiere opened as shakily as ever, with a debate sketch that unveiled Jim Carrey’s rubber-faced, nonspecific Biden impression and devolved into a juvenile free-for-all that could only be soothed by Maya Rudolph’s implausibly maternal Harris. Hamstrung by news that must’ve broken deep into the rehearsal period, the writers inserted a few tame, perfunctory Trump-COVID jokes in that cold open and host Chris Rock’s monologue.

So it was somewhat surprising to see the show rally for Weekend Update. “Well, say what you will about 2020 but, uh, it’s got moves,” said Colin Jost, by way of an introduction, noting the bad timing of Trump’s hospitalization for a cast and crew just returning from a four-month hiatus. It was his co-anchor, Michael Che, who really dug into the “Is it funny?” debate. “While in the hospital, the President isn’t allowed to see any guests, but he is expected to be visited by three ghosts—probably one from his past, one from his… OK, look, this is weird,” Che interrupted himself. “Because a lot of people on both sides are saying there’s nothing funny about Trump being hospitalized with coronavirus even though he mocked the safety precautions for the coronavirus. And those people are obviously wrong. There’s a lot funny about this—maybe not from a moral standpoint, but mathematically, if you were constructing the joke, this is all the ingredients you need. The problem is, it’s almost too funny. It’s so on the nose. It would be like if I were making fun of people who wear belts and my pants just immediately fell down.”

As much as reactionaries would like to deny it, the best comedy—especially within the subgenre of timely, political comedy practiced by late-night hosts and sketch comics—doubles as persuasive social commentary. That’s precisely what Ruffin and Che gave us. Each, in their own way, acknowledged that making light of the President’s still-ongoing suffering would typically be seen as tasteless. Then they invoked his own words and behaviors to argue that he’d already voided his right to such consideration. Trump was not only reckless in the face of COVID, but he has also, throughout four decades in the public eye, appeared chronically apathetic to the pain of others. Or, as Che put it: “If it was Biden who got sick, Trump would 100% be at a maskless rally tonight getting huge laughs doing an impression of Biden on a ventilator.” It wasn’t comedians that knocked the moral universe out of alignment, he’s reminding us; it was Trump.

Colbert’s and Noah’s well-intentioned lectures, aimed at audiences that were almost definitely already aware of the need for masks and responsible leaders, rang hollow by comparison. Because, while we may be living through a moment when sanctimony is tough to resist, that righteous anger should be aimed at the right target. (See John Oliver’s take on footage of mask-free Trump officials celebrating his Supreme Court nominee Amy Coney Barrett: “There is something utterly infuriating about watching them hugging each other when many in this country haven’t seen their families for months or have died alone in a hospital.”) As in earlier controversies over jokes about rape or the Holocaust or 9/11, the issue isn’t whether Trump catching COVID—or anything else—should be off-limits for comedy. It’s whether the comedian in question understands where the humor in the situation lies. 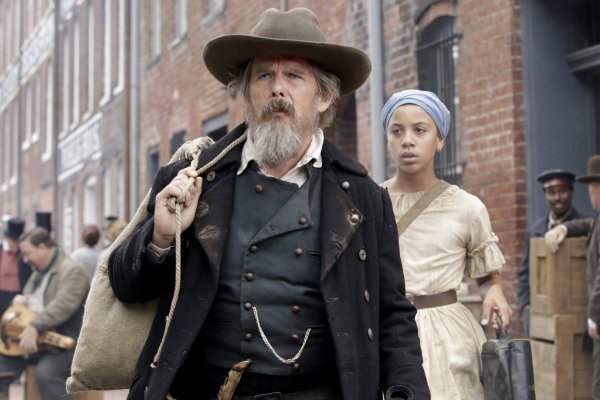