President Trump Is Getting an 'Unprecedented' Mix of COVID-19 Treatments. That Puts Him On the Cutting Edge of Coronavirus Care

With each day since U.S. President Donald Trump reported that he tested positive for COVID-19, his doctors have added a new major therapy to treat the disease, for a total of three at this point.

On Friday—the same day that Trump said he tested positive—the President received an experimental combination of two monoclonal antibodies to help his immune system fight the coronavirus infection, according to his physician, Sean Conley. The next day—after he was hospitalized at Walter Reed National Military Medical Center—he received the drug remdesivir, which blocks the coronavirus’s ability to make more copies of itself. Remdesivir is not approved by the U.S. Food and Drug Administration, but has received emergency use authorization for treating COVID-19. On Sunday—day three—Trump’s doctors revealed he’s also taking dexamethasone, a corticosteroid typically administered to control the inflammatory response common in more advanced stages of the disease.

Patients who receive the monoclonal antibodies, made by Regeneron, are generally enrolled in trials, so researchers can learn more about the combination’s safety and effectiveness. In rare exceptions, doctors can apply for compassionate use outside of these studies, which is what Trump received, according to the company.

“The thing that is odd is that in most trials people usually have symptoms eight, nine or 10 days before they are enrolled in the trial,” says Dr. Walid Gellad, director of the center for pharmaceutical policy and prescribing at the University of Pittsburgh, about remdesivir. “From that standpoint, it’s a little unprecedented that anyone so early [in their disease] would be receiving it.”

Similarly, dexamethasone, a steroid approved to reduce inflammation and suppress overactive immune reactions triggered by autoimmune diseases, is also recommended for patients long into their battle with COVID-19 and who are showing more severe symptoms. The steroid seems to reduce the inflammation that can compromise respiratory tissues and ultimately make it difficult for patients to breathe. But both the U.S. National Institutes of Health and the World Health Organization recommend dexamethasone only for hospitalized patients who need supplemental oxygen or are on a ventilator. The NIH guidance specifically advises against dexamethasone “for the treatment of COVID-19 in patients who do not require supplemental oxygen.” The World Health Organization in September updated its recommendations about corticosteroids to treat COVID-19, with similar advice to limit its use to patients with severe disease who need supplemental oxygen. That advice is based on data from a late June U.K. study that showed that while people on oxygen or ventilators benefited from the drug, those not needing additional oxygen did not.

Read more: What We Still Don’t Know About Trump’s Condition ∙ What If Trump’s Condition Worsens? ∙ Mike Pence Steps Into the Spotlight ∙ Physician Briefing Raises More Questions Than Answers ∙ White House’s Silence Worries Diplomats ∙ U.S. Adversaries Exploiting Trump’s Illness ∙ How Trump’s Diagnosis Could Change the Campaign ∙ Aides Wonder If More Could Have Been Done to Protect Trump ∙ What to Know About Regeneron ∙ Where Trump Has Been Since Monday ∙ What History Can Teach Us About Presidential Health Crises

“What is very odd is that dexamethasone is not typically used in someone whose symptoms just started a few days ago and with one blip of low oxygen and who is otherwise walking on their own with no need for oxygen,” says Gellad. “That’s not when dexamethasone is typically used. So either he is worse than they have admitted to or they are using the drug in a way that is not in the usual standard of care.”

Still, doctors have only been treating COVID-19 for about nine months at the most. The standard of care is still evolving, and definitions about mild and moderate disease and the criteria that make people eligible for unapproved treatments range widely. Dr. Carlos del Rio, executive associate dean and professor of medicine at Emory University School of Medicine, says that recent reports from Trump’s physician that the President’s oxygen levels dropped twice would qualify him as a moderately ill patient and therefore make him eligible to be treated with both remdesivir and dexamethasone.

“At some point in time he dropped his oxygen levels below 94% and he was put on oxygen,” Rio says. “You don’t need to be on oxygen, [you] just need to reach that point. And once it’s reached, he is a candidate for remdesivir and dexamethasone. He kissed that goal post, and once you hit that goal post that’s all you need to do. If I were his physician I would say he needs to be on them. You don’t wait for the patient to remain with low oxygen levels.”

In a Sunday press conference, Conley said that Trump is not currently on supplemental oxygen, although he had two episodes during which his oxygen saturation levels dipped, after which the team decided to start dexamethasone. Conley also intimated that the President’s lung images were “typical” of what doctors would expect in a COVID-19 patient. However, he did not answer questions about what the images showed—such as whether there was evidence of pneumonia. “We don’t know if he has pneumonia, but his doctor said the findings were typical of what we might expect, so that means it wasn’t totally normal,” says Gellad. “We don’t know for sure.”

While Trump may have been prescribed dexamethasone as a preventive measure, it has potential side effects, which is why most doctors are judicious about using it. While studies show it can help lower mortality among COVID-19 patients by anywhere from a fifth (for those requiring supplemental oxygen) to a third (for those on ventilators) compared to those not receiving it, it also inhibits the immune system and can make people more vulnerable to bacterial infections.

“Steroids are immune-suppressing, so you run the risk of predisposing someone to secondary infections,” says Dr. Bryan McVerry, an associate professor of medicine at University of Pittsburgh who recently published a study on corticosteroids in COVID-19 patients. “The data certainly do not support use of corticosteroids at that stage of illness. What we are hearing from reports is that the President seems to be a milder case so I’m not sure I would necessarily use dexamethasone. But I’m not there, and it’s hard to speculate about that and the doctors taking care of him are good doctors so I trust they are weighing the evidence in their decision making.”

Del Rio contends that the drop in Trump’s oxygen saturation levels alone could qualify him as having severe disease. “[His doctors] said at some point in time it dropped below 94%, and the moment it drops below 94% you have severe disease,” he says. “They never used those words but in reality he had severe disease. Everything then fits.”

It may be a matter of semantics, or a more crucial matter of clarifying the still-fuzzy timeline of when the President first felt symptoms and when he was diagnosed, which neither Conley nor anyone else from the White House has done. If Trump has been battling COVID-19 for longer than several days, the treatment course fits more closely with that of most virus patients today. If he has only been infected for a few days, then his treatment strategy would seem more aggressive and pre-emptive than the typical regimen—and considerably riskier. Gellad says that very few, if any, COVID-19 patients have been tested with monoclonal antibodies and then given remdesivir—most of the remdesivir data we have were collected before researchers began testing the newer antibody therapy. And similarly, only a small percentage of the patients in the U.K. dexamethasone study received remdesivir, so it’s unclear whether or how the drugs might interact or affect patient outcomes.

“What is unprecedented is that no one has received remdesivir after getting monoclonal antibodies as an outpatient,” says Gellad. “Anyone who was on a prior trial of remdesivir would not have gotten antibodies beforehand.”

Whether the decisions to start the President on three unapproved therapies for COVID-19 proves risky or prescient will depend on his response over the next few days—and on how sick Trump really was when these decisions were made. Given that Conley admitted Sunday that he previously evaded questions on Trump’s need for supplemental oxygen because he “didn’t want to give any information that might steer the course of the illness in another direction,” that may never become clear. “How long has he really had symptoms? We don’t know, and we will probably never know,” says Gellad. 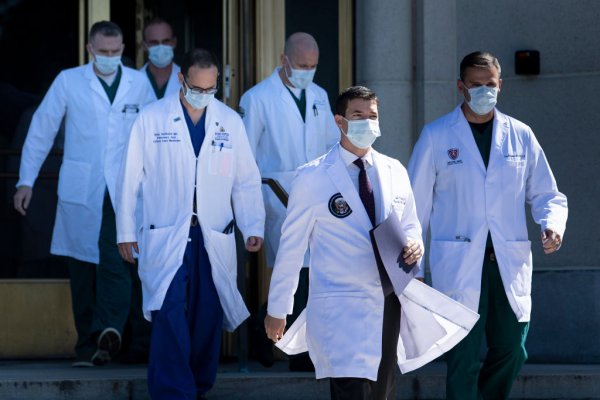 The American People Deserve to Know More About President Trump's Condition
Next Up: Editor's Pick