During a press conference Saturday from Walter Reed National Military Center, where President Donald Trump was admitted Friday, White House physician Sean Conley said he and his medical team are “extremely happy with the progress” Trump has made since he announced he tested positive for COVID-19 early Friday morning.

However, some of the information provided at the briefing raised even more questions about the state of the President’s health and the timeline of his illness.

Conley said that the President had “a mild cough and some nasal congestion and fatigue” on Thursday, “all of which are now resolving and improving.” The President had a fever Thursday into Friday, but has been fever-free since Friday morning, he said.

Dr. Sean Dooley, another member of the President’s medical team, said the team is also monitoring President Trump’s cardiac function, kidney function and liver function, all of which are currently healthy. He added that the president is in “exceptionally good spirits” and told the team that he felt like he “could walk out of here today.” When asked about the President’s risk factors, Conley said that Trump is a 74-year old man who is “slightly overweight,” which puts him at a greater risk of complications from the virus. But Conley said both the President’s cholesterol and blood pressure are healthy.

However, hours after the conference ended, White House chief of staff Mark Meadows told the Associated Press that the President experienced a “very concerning” period on Friday and the next 48 hours will be critical in terms of his treatment. An anonymous statement expressing similar information about Trump’s health was circulated to the White House press pool immediately after the briefing.

Conley also said the President is currently not on supplemental oxygen, and is not currently having difficulty breathing or walking around the White House medical unit. He stressed that the President’s admittance to the hospital was a “precautionary measure to provide state of the art monitoring and any care that he may need.”

But Conley dodged questions about whether Trump was ever on supplemental oxygen during the illness, only saying that he was not on oxygen Thursday and “while we were all here, he was not on oxygen,” on Friday. The Associated Press and the New York Times reported shortly after the Saturday briefing that the President received supplemental oxygen while in the White House on Friday, before he was flown to the hospital.

When asked about the timeline of the President’s diagnosis, Conley gave two seemingly disparate time frames.

Read more: What If Trump’s Condition Worsens? ∙ Mike Pence Steps Into the Spotlight ∙ Trump’s Unique COVID-19 Treatment ∙ White House’s Silence Worries Diplomats ∙ U.S. Adversaries Exploiting Trump’s Illness ∙ How Trump’s Diagnosis Could Change the Campaign ∙ Aides Wonder If More Could Have Been Done to Protect Trump ∙ What to Know About Regeneron ∙ Where Trump Has Been Since Monday ∙ At 74, President Trump Is at Higher Risk of COVID-19 Complications ∙

“Just 72 hours into the diagnosis now, the first week of COVID, in a particular day the first seven to 10 are the most critical in determining the likely course of this illness,” Conley said at the start of the press conference. But when asked shortly afterwards when the President tested positive, Conley said the President was tested Thursday afternoon after learning he had come in close contact with someone who is positive and “clinical indications” that gave the team “a little bit more concern,” and then tested positive late Thursday night.

Hours after the briefing, Conley released a “timeline clarification” saying that he “incorrectly used the term ‘seventy two hours’ instead of ‘day three’ and ‘forty eight hours’ instead of ‘day two’ with regards to [the President’s] diagnosis and the administration of the polyclonal antibody therapy,” adding that “the President was first diagnosed with COVID-19 on the evening of Thursday, Oct. 1 and had received Regeron’s [sic] antibody cocktail on Friday, Oct. 2.”

President Trump announced he and First Lady Melania Trump had tested positive for COVID-19 about 37 hours before the Saturday briefing, on early Friday morning via tweet. That evening the White House announced he would be flown to Walter Reed where he would be hospitalized for at least a few days. Conley said on Saturday that the First Lady has not indicated that she needs hospitalization at this time.

As of Saturday morning ET, the U.S. has had at least 7,337,807 cumulative confirmed cases of COVID-19 and at least 208,779 deaths, according to Johns Hopkins University. 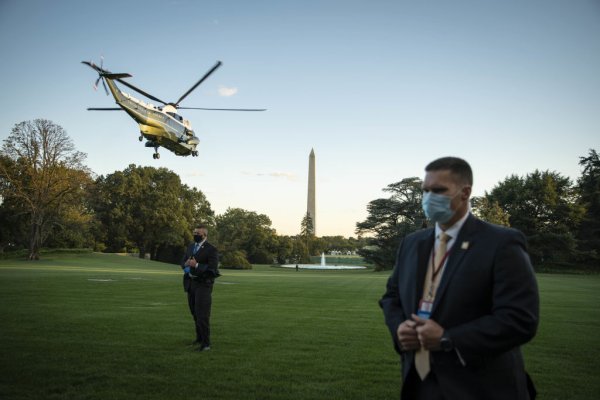 Silence on Trump's Health Fuels Rumors Among Diplomats
Next Up: Editor's Pick