Here's Everywhere We Know Trump Has Been Since Monday

President Donald Trump announced by tweet in the early hours of Oct. 2 that he and Melania Trump tested positive for COVID-19 after months of downplaying its danger and of functioning in a business-as-usual manner.

White House Chief of Staff Mark Meadows said Friday that while the President is in “good spirits,” he does have mild symptoms. Trump is expected to be quarantining along with the First Lady. The middle-of-the-night announcement prompted close aides and other public figures to get tested themselves, but the question of who else they may have come into contact with looms large.

Meadows told reporters on Friday that the “core” White House team continues to get daily testing, confirming that White House advisers Jared Kushner, Dan Scavino and himself all tested negative. (Meadows was not wearing a mask when he spoke to press.) One reporter who was part of the White House press pool on Friday and a White House staffer who sits in the West Wing also tested positive for COVID.

But the President’s daily activities require a large entourage, including staffers, press, security, and military. The President also regularly interacts with supporters and other participants at campaign and White House events, where he often eschews wearing a mask.

Trump’s maintaining a busy traveling schedule of public events in the middle of the pandemic has raised concerns for months, both over worries that the President of the United States could contract the coronavirus himself, and because of the large number of people he could put at risk along the way if he did. The White House itself was always a potential virus hotspot, where staffers, visitors, and press come in close contact with each other each day and where the social distancing measures have been inconsistent at best.

But this week Senior White House aide Hope Hicks tested positive for coronavirus, as first reported by Bloomberg late Thursday evening, which said she felt ill and quarantined aboard Air Force One when she traveled on Sept. 30. Meadows said Friday that Hicks’ test results came back Oct. 1, and that the White House had pulled people from traveling Thursday when they’d started doing contact tracing. The New York Times has since reported that the Chairwoman of the Republican National Committee, Ronna Romney McDaniel, who was with the President last week, tested positive on Wednesday.

The upper echelons of the the executive branch appears now to be a potential outbreak hotspot in America, with potential consequences for the election that is underway, the economy, and national security. According to the Centers for Disease Control and Prevention, the incubation period for COVID-19 is believed to be up to two weeks, with the symptom onset typically falling around four to five days after exposure. Here’s a breakdown, compiled from White House guidance on Trump’s schedule, press pool reports, and streamed events, of where the President has appeared since Monday and who we know he interacted with.

The President travelled from the White House to Joint Base Andrews via the Marine One helicopter.

The President travelled from Joint Base Andrews to Morristown, New Jersey, via Air Force One with White House aides Judd Deere and John McEntee.

The President travelled from Morristown Municipal Airport to Bedminster, New Jersey via Marine One. There, the President held a roundtable with supporters and a fundraiser at the Trump national golf club that were closed to press. He was expected to deliver remarks.

President Donald Trump, center, is seen seated inside Marine One helicopter, not wearing a face mask, as he and members of his staff, including White House director of social media Dan Scavino, left, arrive at the White House in Washington D.C., on Oct. 1, 2020. President Trump and first lady Melania Trump have tested positive for the coronavirus, the president tweeted early Friday.
Carolyn Kaster—AP

The President travelled from Bedminster back to Morristown via Marine One, where he re-boarded Air Force One to travel back to Joint Base Andrews.

After arriving, he traded Air Force One for Marine One again, which took him back to the White House.

The President traveled from the White House to Joint Base Andrews in Maryland via Marine One with his advisers Dan Scavino, Jared Kushner, Hope Hicks, and Stephen Miller. Prior to boarding, he spoke with press.

At Joint Base Andrews he boarded Air Force One, which took him to Minneapolis. He landed at Minneapolis-Saint Paul International Airport, where he interacted briefly with greeters, who were waiting to meet him at the bottom of the plane steps. According to the White House they were the Majority Leader of the Minnesota Senate Senator Paul Gazelka and his wife, Maralee Gazelka, Minority Leader of the Minnesota House Kurt Daudt, Republican Senate candidate Jason Lewis, Adjunct General of the Minnesota National Guard Shawn Manke, Col. James Cleet, and Chief Master Sargent Mark Legvold.

Several dozen supporters were also waiting behind barricades, and the President briefly spoke with them, separated by a 10-foot buffer. From the airport, he traveled via motorcade to Shorewood, a Minneapolis suburb.

In Shorewood, he attended a fundraiser for his campaign and the Republican National Committee at a private residence on the South shore of Lake Minnetonka linked to Martin Davis, a prominent GOP donor. It is unclear who attended this event.

Supporters of President Donald Trump look on as he speaks during a campaign rally at Duluth International Airport on Sept. 30, 2020.
Leah Millis—Reuters

The President returned to the Minneapolis airport via motorcade, where he reboarded Air Force One. From there, he flew north to Duluth International Airport for a campaign rally at the airport, where several thousand people appeared to attend, most not wearing masks and where Trump threw hats into the audience before taking the stage.

Trump travelled back to Joint Base Andrews via Air Force One, aboard which was White House Chief of Staff Mark Meadows, who briefed reporters at the back of the plane during the flight. After arriving, Trump boarded the waiting Marine One to travel back to the White House. When he returned to the White House, he saluted a guard and waved to the press corp before returning directly to the residence.

Tuesday, Sept. 29: Trump travels to Ohio to participate in the Presidential debate

Trump and First Lady Melania Trump greeted cheering supporters on the South Lawn — where Trump pumped his fist for supporters — before boarding Marine One. White House adviser Dan Scavino was among the staffers who also boarded. They departed for Joint Base Andrews.

It’s unclear how closely he sat next to or if he interacted with all those people while on the flight, which included some of the President’s guests for the first presidential debate, but the White House that day said Trump interacted with Ohio state Rep. Bernadine Kent, James Whitaker, and Bob Paduchik aboard the plane.

The President arrived at Cleveland Hopkins International Airport. He then traveled via motorcade to the debate venue, the Sheila and Eric Samson Pavilion, before taking the motorcade to the InterContinental Suites Hotel Cleveland. Hope Hicks, Bill Stepien and Dan Scavino were among those who traveled in one of the motorcade vans.

Trump was then scheduled to be at the hotel until the debate. It’s unclear who he interacted with during this time.

Trump traveled back to the debate venue via motorcade, where he spent approximately 90 minutes on stage with Joe Biden as Fox News’ Chris Wallace moderated. None of them wore a mask for the debate. (Biden announced Friday he and his wife had tested negative.)

Approximately 80 people were expected to be in the venue for the debate, where social distancing measures were in place and attendees had to have a temperature check before entering. Among those with reserved seating in the venue were Melania Trump, Ivanka Trump, Donald Trump Jr., Eric Trump, Tiffany Trump, Lara Trump, Kimberly Guilfoyle, Rep. Jim Jordan, Mark Meadows, Phoebe Meadows, Blake Meadows, and Ronna McDaniel.

Among Trump’s confirmed guests were UFC fighter Colby Covington and Rudy Giuliani. Sean Kilbane, a North Carolina veteran who said he got a ticket to the debate through the Trump campaign, and Bobby Dove, a Florida veteran who met Trump at Walter Reed several weeks ago, were also present for the debate.

Not all audience members were wearing masks, including the Trump family, despite the rules saying attendees had to.

When the debate was over, Trump left the debate venue via motorcade and traveled back to the airport, where he boarded Air Force One for Joint Base Andrews, Maryland.

Among those who deplaned Air Force One was Rudy Giuliani, who had been spotted by reporters throughout the day. Trump returned to the White House from Joint Base Andrews via motorcade.

Monday, September 28: At the White House

Trump did not travel on Monday, but he interacted with several people at the White House. On the South Lawn, he inspected an electric pickup truck from Ohio. White House adviser Peter Navarro and Republican Senator Rob Portman of Ohio were among those present. Also in attendance were Ohio Rep. Mike Turner, Steve Burns, the CEO of Lordstown Motors, and Rich Schmidt and Michael Fabian, Lordstown Motors employees. Trump also interacted with press.

Seated in the front row were Administrator for the Centers for Medicare and Medicaid Services Seema Verma, Secretary Betsy DeVos, and HHS Secretary Alex Azar.

Advisers Douglas Hoelscher, Brad Smith, Ja’Ron Smith, and Quellie Moorhead were expected to be present from the White House. Other Trump administration members that were expected to attend were Rear Admiral Michael Weahkee and Dr. Tammy Beckham.

Due to an error in the White House pool report, the original version of this story misstated President Trump’s interaction with supporters before boarding Marine One. He pumped his fist for supporters, he did not fist bump supporters. 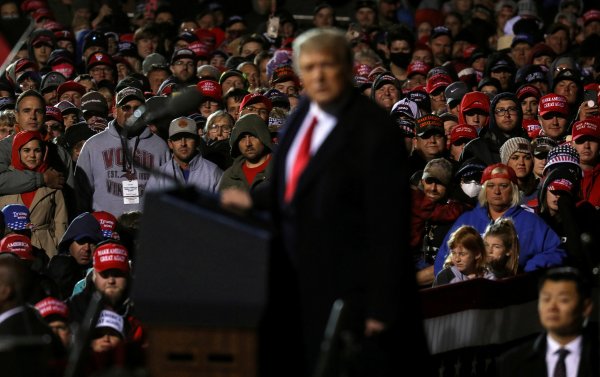 President Trump Tests Positive for COVID-19
Next Up: Editor's Pick