I Was Just Denied Clemency in the State of Florida. I'm One of Many People With Past Convictions Living Without My Full Civil Rights

I guess I’m a public figure now, but I still haven’t gotten used to being recognized on the street. I still remember when I was homeless. How people would look right past me, sometimes it felt like they looked right through me on their way to wherever they were going. At my lowest, all I wanted was to be seen as an equal.

That was still true after I was released from prison and started to become an advocate. I knew there were others out there like me. We’d made a mistake, done our time and were ready to use our experiences to build a more just Florida.

In 2018, we made our case to the people of this state, and they agreed with us. Voters approved Amendment 4, restoring voting rights to 1.4 million Floridians. We all worked together to help our state move toward justice and equality.

But it was a short-lived victory.

The state of Florida and the federal courts have decided to put more hurdles in front of the people of Florida by ordering returning citizens (people with a previous felony conviction who have served their time) to pay all fines and fees before having their voting rights restored. In a cruel twist, they can’t even inform people of the amounts they owe since there is no comprehensive database of fines and fees.

In a September decision overturning a ruling that declared this practice unconstitutional, the 11th Circuit Court of Appeals referenced the “common practice” of excluding those who commit “serious crimes” from voting. It is this common practice of excluding people with past convictions that we at the Florida Rights Restoration Committee take issue with. Every returning citizen should have a pathway to the restoration of their civil rights, including the right to vote, the right to run for office and the right to serve on a jury, so that they can fully participate in our democracy.

So much of American life is dictated by who you know — one of the few places where we’re all the same is in the voting booth. Thanks to the people of Florida and Amendment 4, earlier this year I stepped into the booth for the first time in 30 years. Other returning citizens have that dream, but the state of Florida continues to tell them to wait — to defer their dreams of equality.

Today, I went before the Florida clemency board — the governor and his cabinet —and I had an opportunity to explain why I should be granted clemency, why my civil rights should be restored and why I should be made whole as a citizen. My petition was deferred. I was told to continue to wait — that I still need to prove I am worthy of my inalienable rights, that I am still not whole in their eyes.

But this is not just about me. No one who has served their time should be forced to jump through hoop after hoop, or spend years waiting for their clemency hearing, while they rebuild their lives.

The everyday people of Florida have used their voices and their votes to say that formerly incarcerated people like me deserve a second chance, and the state of Florida clemency board should heed that call and take action to grant timely clemency to all returning citizens — that is the spirit of Amendment 4 and the will of the people.

What we’re asking for is not complicated to understand nor implement. In fact, under Governor Charlie Crist, more than 155,000 Floridians were granted clemency and had their rights restored, and under Governor Jeb Bush, more than 76,000 returning citizens were granted clemency. We’re just asking for equality. We’re just asking for the will of the people to be respected. Gov. DeSantis, you and the Florida clemency board can make this right.

Let us remember some of the last words of Martin Luther King Jr.: “All we say to America is, ‘Be true to what you said on paper.’” The state of Florida has the opportunity to do just that for scores of returning citizens. It isn’t always easy to be a champion for the truth, but it will set you, and so many of our fellow Floridians, free at last. 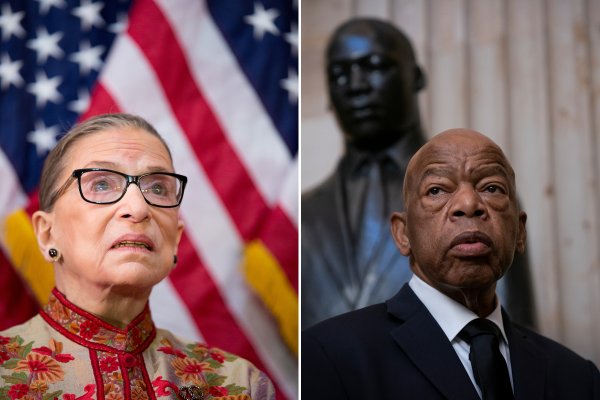 Ruth Bader Ginsburg and John Lewis Spent Their Golden Years Fighting for Us Because They Didn’t See Any Other Choice
Next Up: Editor's Pick