The United Nations At 75: It Has Never Been More Needed Nor Under Greater Threat

Secretary-General Tygve Lie (lower left), of Norway, stoops for a close view as workmen set the cornerstone at the new United Nations headquarters, Oct. 24, 1949. Looking up from the dais below are President Truman and other U.S. and foreign dignitaries. A huge U.N. flag, flanked by the colors of the 59 member nations, provides a backdrop.
Bettmann Archive/Getty Images
Ideas
By Ian Bremmer
Bremmer is a foreign affairs columnist and editor-at-large at TIME. He is the president of Eurasia Group, a political-risk consultancy, and GZERO Media, a company dedicated to providing intelligent and engaging coverage of international affairs. He teaches applied geopolitics at Columbia University’s School of International and Public Affairs and his most recent book is Us vs. Them: The Failure of Globalism.

As the United Nations celebrates its 75th anniversary this week, its limitations have never been more apparent. Neither has its necessity.

I’m a political scientist by training, focusing on international relations. The first thing they teach you in IR 101 is that the international system exists in a state of “anarchy”—there is no global policeman to enforce the rules. In fact, there are no rules. Countries pretty much do what they want—the only thing that stops them is other countries acting against them. Sometimes, measures like economic sanctions are enough. Sometimes, they aren’t—the ultimate weapon countries have to keep others in check is the threat of violence, or all-out war.

The U.N. was born from the wreckage of World War II, a period of human history so catastrophic that policymakers came together to figure out a way they could devise an international system that, even if it didn’t eliminate war, at least made it the least likely option to be deployed. Hence the creation of the U.N. (along with other Bretton Woods Institutions like the World Bank and the International Monetary Fund), an institution built to foster dialogue and diplomacy, and to provide an arena other than the battlefield for countries to hash out disagreements. And for many decades it largely worked—while there have been plenty of wars after 1945, the world’s major powers have never been sucked into a battle of the enormity or destruction of World War II.

But then the world began to shift. The Berlin Wall fell, then the Soviet Union broke apart, then came 9/11, then the global financial crisis, and so on and so on. The world’s geopolitical order evolved with each of these developments, first slowly, then suddenly. But the U.N. mostly stayed the same—the power structures it established in 1945 were frozen to reflect the power balances of the time. To his credit, the current U.N. Secretary-General Antonio Guterres acknowledges this: “I do believe that the present architecture is in many aspects outdated. Especially, we need to make the architecture correspond to what the world is today. The architecture we have is still largely corresponding to what the world was after the second World War. You see it in the Security Council, you see it in the Bretton Woods system,” he told me in a recent interview.

To be fair to the U.N., preventing another world war wasn’t its sole mission. If the first day of IR 101 is focused on “anarchy”, the second day is “the tragedy of the commons.” Absent a well-functioning order, a collection of actors—be they animals, humans or countries—will deplete the finite resources all need to survive in pursuit of their individual goals. Without coordination, it doesn’t make sense for any individual member to stop using the resources it needs for the sake of the greater good; others will go on using it out of their own interest, and have one less competitor to deal with. In the real world, there is no symbolic self-sacrifice that can reliably convince others to change their ways.

Climate change is the textbook example, and one that is only growing worse. It’s proven difficult for a country to sacrifice the immediate well-being of its own citizens and economy for benefits that won’t be experienced for decades down the line. The U.N. has attempted to address this by providing the structure necessary for collective action in our fight against global warming, efforts that resulted in the Paris Climate Agreement. But it didn’t take long for a certain country to prove that the U.N. has no real ability to ensure adherence to the system it has set up. Now U.S. participation in the agreement hangs on elections in the fall.

2020 has crystalized the need for immediate collective action in other ways, too. The current pandemic isn’t just a challenge because of the global health risks it poses or because it hits economies across the globe all at the same time (which means a return to normal is impossible until everyone returns to normal), but because it actively make inequality worse within countries and boosts populists, many of whom take a zero-sum approach to the world. Their emphasis on “my nation first” politics complicates the coordination necessary for the world to sustainably triumph over the current pandemic. Guterres’ calls for better coordination have gone unaddressed, which says as much about the U.N. in 2020 as it does the rest of the world.

It’s easy to highlight the failures of the U.N.. But it’s also had real achievements that can’t be overlooked. WHO helped spearhead the successful eradication of smallpox. UNICEF has provided hundreds of millions with clean water over the decades, and millions more with life-saving food and immunizations. The U.N. Refugee Agency is at the forefront of the world’s response to massing numbers of refugees, those people displaced by war and violence and which no state wants to take sole responsibility for—that’s an area where the U.N., its capabilities and special status, proves indispensable. Of course, there have also been real failures of the institutions, and ones that can’t be blamed on the structure of the international system. There was the massacre at Srebrenica. There have been cases of sexual abuse by U.N. peacekeepers, and Cholera outbreaks traced back to U.N. missions. And for all the good it has done in taking care of the world’s destitute, it has done nowhere near enough to prevent the human rights abuses in Myanmar and Xinjiang. To help the U.N. go forward, a full account of its successes and failures must be taken.

Beyond that, what does the U.N. need to do to make itself relevant for the 21st century? I’ve already mused on this topic a few years ago, but as the U.N. knows all too well, the world has become a very different place since then.

I wrote a book about the failure of globalism. World leaders need to acknowledge that and work hard to address it within their own borders. But they also need to acknowledge that there are problems facing their populations that cannot be addressed if they go it alone. And those problems need to be addressed through the U.N., to give it the funding and respect it deserves, not simply pull out of its agencies over disagreements; they have to work within the system. For its part, the U.N. needs to show that it is addressing its own shortcomings, and that it’s evolving along with the a rapidly-changing world. New permanent members of the Security Council would be a good start; so too a digital WTO, one that updates the cyber norms that govern the world around us—the U.N. is already moving in the right direction on the latter front.

As the U.N. turns 75 this week, there have never been so many geopolitical pieces in play during my lifetime. The U.N. has an important role in making sure that those pieces find a way to fit together—peacefully—not just for its own sake, but for the world’s. And that starts with reforming the institution from within. 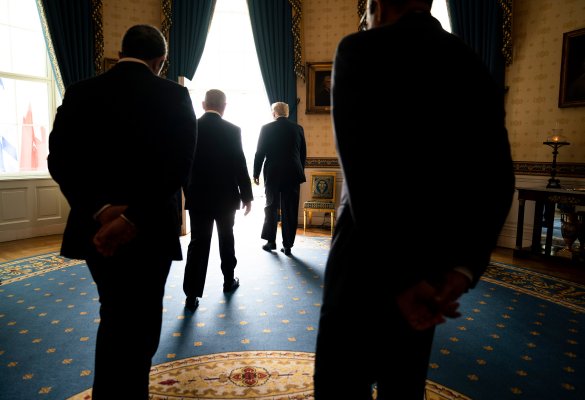 A Win for Trump in the Changing Middle East
Next Up: Editor's Pick