Senate Majority Leader Mitch McConnell of Ky., speaks during a news conference after attending a Republican luncheon on Capitol Hill in Washington on July 21, 2020.
Jacquelyn Martin—AP
By Philip Elliott

In a statement released by his office, the Kentucky Republican vowed to move ahead with President Donald Trump’s pick to fill the seat: “President Trump’s nominee will receive a vote on the floor of the Senate.” McConnell’s statement echoes comments he made in May of 2019 when asked about an election-year opening: “We’d fill it.”

McConnell’s declaration sets in motion a fast and fraught six weeks in the run up to Election Day on Nov. 3. It also may portend uncertainty between the vote and the Inauguration on Jan. 20 of next year.

McConnell’s gambit is a risky one, although the clever tactician seldom loses. In 2017, he changed the Senate’s rules to eliminate a 60-vote requirement for judicial nominees. In ditching the filibuster and subsequently reducing the time for debate on judicial nominations, McConnell has been able to steamroll more than 200 lifetime appointments onto federal benches.

But this one may be different—McConnell’s math is tricky. He has a 53-vote majority, meaning he can lose just three votes if he’s counting on Vice President Mike Pence to break the tie. Assuming Democrats stay united, they would have to peel away four Republicans from McConnell’s control—a steep climb in a chamber where moderates are hard to come by.

Republican lawmakers have for months been facing questions about whether they would consider a Trump nominee, especially since Ginsburg’s health issues have resurfaced. Most have been coy, but several have been at least tepid in their consideration. Just hours before Ginsburg’s death was announced, Sen. Lisa Murkowski of Alaska told her local N.P.R. affiliate that she would not vote to confirm someone in this Congress. “I would not vote to confirm a Supreme Court nominee. We are 50-some days away from an election,” she said.

Similarly, Sen. Susan Collins—in a fight for re-election at home in Maine—has said a confirmation vote so close to an election is off-limits. “I think that’s too close, I really do,” she told The New York Times. It’s not far from where Sen. Chuck Grassley, the Iowan who has tremendous sway on the committee that would handle a nominee’s confirmation hearing, has landed in past comments. None on Friday addressed the prospect of a confirmation battle while votes are already being cast in seven states.

Sen. Mitt Romney, a Utah Republican and favorite foe of the President’s, is a potential defection from the GOP caucus as well.

Democrats were quick to also point to comments from Sen. Lindsey Graham of South Carolina in which he said there wouldn’t be a confirmation during the last months of Trump’s first term. “If an opening comes in the last year of President Trump’s term, and the primary process has started, we’ll wait to the next election,” Graham told The Atlantic in 2018. But there’s a big gap between a hypothetical and the reality, especially with a politician who has become pals with this President and is now the chairman of Judiciary Committee.

On top of all of this, there’s a quirk in Arizona election law that could give Democrats a pick-up opportunity immediately after Election Day. Should Sen. Martha McSally lose, Democrat Mark Kelly could be swapped immediately into the seat. That further narrows McConnell’s window for success.

In theory, all of this should stop a nomination in its tracks right now. But there are other considerations for Republican Senators. A nomination fight could mobilize the party’s conservative base. That could help get some Senators facing voters this fall—namely, Colorado’s Cory Gardner, North Carolina’s Thom Tillis and Iowa’s Joni Ernst—across the finish line. For McConnell to retain his control of the Senate, he needs to keep his majority in the Senate. A Supreme Court fight might just be a super-motivator. If sacrificing Collins is the price McConnell has to pay to keep the gavel, he’ll pay it.

Moreover, ceding the choice of the next Supreme Court Justice to a President Biden, who could pick someone just as liberal as Ginsburg, would be a stain on conservatives’ record on nominations. And as much as folks like Murkowski and Collins have suggested a split with Trump, they also have their own legacies to consider. During the impeachment of Trump, both voted against convicting the President, and Murkowski voted against even hearing from witnesses. They are willing to show distance, but not a chasm. A durable conservative majority at the Supreme Court isn’t something to scoff at for them. And the President’s supporters can be punitive. 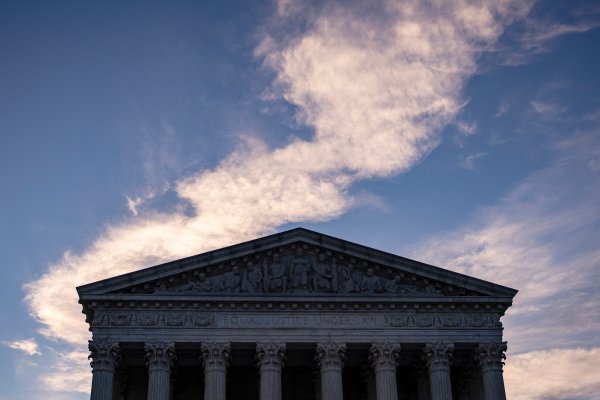 GOP See Opening for Trump in Ginsburg's Death
Next Up: Editor's Pick