While the world waits for a COVID-19 vaccine, children across the globe are going without shots already known to be life-saving.

With the world in disarray due to the COVID-19 pandemic, the number of children vaccinated this year against infections like diphtheria, tetanus, pertussis, measles and pneumococcal disease has fallen to levels not seen since the 1990s, according to a new report from the Bill and Melinda Gates Foundation.

That stark figure comes from the Gates Foundation’s annual Goalkeepers report, which evaluates global progress on the United Nations’ sustainable development goals, a set of global health, equity and sustainability benchmarks the group hopes to hit by 2030.

Progress on nearly all of the goals has stalled or reversed this year as the world struggles to contain the pandemic. Rates of poverty, malnutrition and childhood mortality are going up for the first time in years. A continued drop in global smoking rates is some of the only good news in the report.

But the significant decrease in childhood vaccinations is among the most dramatic of the report’s findings. International survey data from the Institute for Health Metrics and Evaluation shows that scores of children around the world missed vaccination appointments this spring, compared to last. Last year, 84% of the world’s children received all the vaccines recommended by the World Health Organization. Now, it’s around 70%.

“In some cases, these vaccinations are simply delayed, and kids can ‘catch up’ later without much consequence,” the Gates Foundation’s report reads. “However, some infections, such as measles, spread easily, and even short-term disruptions can lead to immediate increases in illness and death.”

It’s also not clear when children in some parts of the world will be able to catch up. In many developing areas, primary care clinics have closed and nearly all health resources have gone toward combating COVID-19.

Even in developed countries like the U.S., data show that people have skipped preventive and primary care visits in huge numbers. That began this spring, when doctors urged people to push off non-urgent appointments to avoid possible exposure to COVID-19 and conserve resources for physicians treating coronavirus patients. Compared to a normal year, about 2.5 million fewer doses of non-influenza pediatric vaccines were ordered this March and April, according to U.S. Centers for Disease Control and Prevention data. 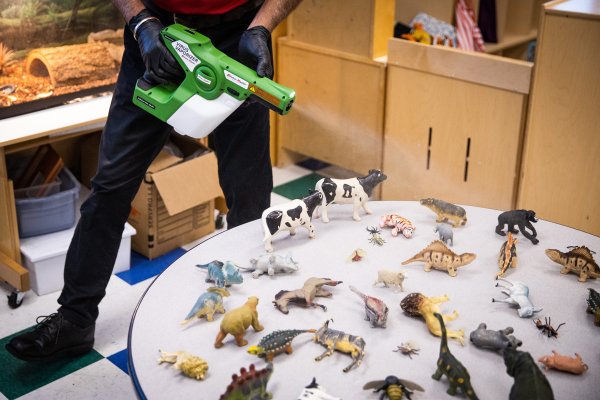 Childcare Is a Form of Vital Infrastructure
Next Up: Editor's Pick