J.K. Rowling attends a screening of 'Fantastic Beasts: The Crimes of Grindelwald' in London on Nov. 13, 2018.
Gary Mitchell—LightRocket/Getty Images
By Suyin Haynes

The last 48 hours have been full of conflicting emotions for Marieke Nijkamp. A New York Times bestselling author, Nijkamp’s new novel, a YA thriller titled Even If We Break, was published Tuesday. It’s Nijkamp’s third novel, and their first to include a non-binary protagonist, which makes the book “very special” to them, as Nijkamp is a non-binary, disabled person. “Mainly I want to reflect the world that I see and live in and am a part of,” Nijkamp says. “I think fiction doesn’t do that enough as it is.”

One example of fiction they feel is unlikely to do that: J.K. Rowling’s new novel, Troubled Blood, also publishing on Tuesday. It quickly faced criticism for allegedly leaning into portrayals of trans people as villains.

Nijkamp, who says they’ve mostly tried to ignore Rowling’s previous comments on trans issues, found the controversy impossible to avoid this week. The juxtaposition was a painful one. “We’re generally not perpetrators of violence, we’re victims,” Nijkamp says. “I can’t imagine going back and explaining to my teenage self, ‘Hey, this author you love so much blatantly hates people like you.”

Troubled Blood is the fifth in a series featuring the private detective Cormoran Strike, which Rowling, a cisgender woman, penned under the male pseudonym Robert Galbraith. In an early review published on Sunday, British newspaper The Telegraph called Troubled Blood “a book whose moral seems to be: never trust a man in a dress,” citing a plotline featuring a male serial killer dressing up in women’s clothing to commit murders.

A subsequent review from The Guardian describes this character as “just one of many suspects” in the novel’s primary narrative, however; while the killer is apparently written to fetishize lingerie, he uses a stolen women’s coat and a wig solely as a disguise to aid his crimes. The review adds that, “he is not the main villain, nor is he portrayed as trans or even called a ‘transvestite’ by Rowling.”

Still, given Rowling’s previous comments on transgender people and gender identity, the plotline is “disappointing, but not surprising,” says Mason Deaver, author of I Wish You All the Best. The novel, Deaver’s debut, follows the journey of a character coming out as non-binary, and their newly-forged friendships along the way. Writing, Deaver says, is a way to create what would have mattered to them as a child.

They are concerned about the impact of Rowling’s latest work, particularly on those who are trans fans of Harry Potter and had previously admired her work. “I think the harm it’s going to do to them is tragic,” they say.

Trans and non-binary writers believe that narratives relying on transphobic tropes have a harmful impact on their community, and reinforces both transphobic sentiments and misinformation at large. As outlined in this year’s Netflix documentary Disclosure, which analyzed transgender representation on screen, narratives of mentally ill men dressing in women’s clothing and committing violence towards women have long existed in popular media, like the films Psycho and Silence of the Lambs.

“It might not seem obvious at first, but it’s very harmful to portray that being trans adjacent is somehow connected to your mental health,” says Deaver. “I think for the people who hate us, or don’t like us, it’s going to help add more fuel to the fire.”

It’s not the first time that Rowling has been criticized for her treatment of trans issues within her fiction writing. As journalist Katelyn Burns noted in a review of The Silkworm, another of Rowling’s books published under the Galbraith moniker, a trans character’s appearance was also described using problematic stereotypes. And Rowling’s choice of pen name has also been subject to controversy—Robert Galbraith Heath was the name of a mid-20th century anti-LGBTQ conversion therapist. (Rowling has previously said that the name was a conflation of her political hero, Robert F. Kennedy, and a childhood fantasy name ‘Ella Galbraith’.)

For many authors, the focus on trans characters in Rowling’s work detracts from what they see as the authenticity—and inclusivity—their writing can provide. Fiction should reflect the world we live in and speak to the full experience of life that doesn’t solely focus on identity or on traumatic experience, says Lizzie Huxley-Jones, a non-binary autistic author of children’s fiction living in London. “I want to put stories out there that feature trans and disabled kids, that aren’t specifically about them experiencing transphobia or ableism, or their family learning to love them and come to terms with who they are. I want to make a space for people to see a facet of themselves that’s also safe and comforting, an escape. We need that right now.”

That sense of escapism is something Rin Chupeco, a non-binary YA author based in Manila, also weaves into their sci-fi and fantasy novels. “I’ve always felt, in many ways, trapped within my own body, and being able to write about fantastical worlds with magic, dragons and demons always feels freeing” they say.

And the attention focused on uplifting their work amid controversies has felt conflicting at times. “We want to be remembered for our books, and not because a rich white author chose to attack us,” says Chupeco. “It gets really tiring to only be remembered if someone else does something to make it terrible for us. This is not to say I don’t appreciate the support, but at the same time, it’s exhausting to be constantly put through this specific loop, where we’re only remembered when someone does something to us, and then forgotten by the time it blows over.”

For Nijkamp, who is spending Tuesday celebrating publication day, the feelings are similarly complicated. “It’s great to see that people are taking this as a jumping off point, but I don’t necessarily want a transphobic person to say and do stuff for my work to be noticed.” Over the last day, Nijkamp has had several readers reach out and express excitement about feeling represented in their work, but hopes that the energy is more long-lasting, and that cis authors too take responsibility for making their work more inclusive.

“I don’t think that I would have gotten to the realization that I am non binary without fiction, and without fiction for young people in particular,” Nijkamp explains. “Ideally figuring out what it means to be me, or what it means to be you shouldn’t be this much of a struggle. What I’m hoping for in response to this entire situation is that in raising awareness of the work of trans and non-binary authors, readers will be able to not just find hatred in books, but also find welcoming.” 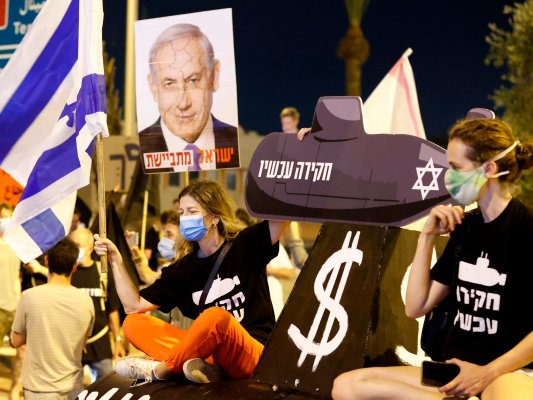 Why Israel Is Going Into a Second COVID-19 Lockdown
Next Up: Editor's Pick