Daylight Saving Time Should Be Permanent. The Pandemic Shows Us Why

The sun sets behind power lines in Los Angeles, Calif. on Sept. 3, 2020.
Frederic J. Brown—AFP/Getty Images
Ideas
By Orrin G. Hatch
Hatch is chairman emeritus of the Orrin G. Hatch Foundation. A Utah Republican, he served in the U.S. Senate from 1977 to 2019.

Fall typically signifies a return to normalcy—back to sports, back to school and back to work after a long summer vacation. But not this year.

COVID-19 maintains a stranglehold on American life, ensuring that fall 2020 will be anything but normal. Pandemic restrictions have left our nation grappling with a severe economic recession alongside a growing mental health crisis. While there’s no panacea for these problems, one simple step by Congress could help alleviate the pain: Passing federal legislation to make daylight saving time (DST) permanent.

For months, Republicans and Democrats have been at loggerheads over a broad stimulus package—but a permanent switch to DST would be a stimulus package all on its own. It would boost economic growth, ease the mental health crisis, reduce crime and even save lives. That’s why Congress must act now. The clock is ticking, and we can’t afford to move it back.

Understanding the history of DST strengthens the case for its future. It’s a common misconception that DST was invented for farmers—the reasons behind it have always been centered on cost-savings and the economy. Congress first implemented the clock change during World War I to conserve fuel in the summer. Over time, however, the salutary effects of increasing daylight hours became so clear that Congress voted to extend DST in 2005 so that we now observe it eight months of the year.

The argument for making DST permanent is strong in a normal year—but amid a global pandemic, it’s stronger than ever. Our society is staring down the barrel of a mental health disaster unseen in our lifetimes. Since the lockdowns began, the number of adults reporting symptoms of anxiety and depression has more than tripled. Compounding this crisis is an economy in shambles: COVID-19 has destroyed an estimated 30 million jobs since March and unemployment today sits at 8.4%.

Now consider this—on November 1, we will move our clocks back one hour to reflect U.S. standard time. The result will be painfully short days, with the sun setting in many states before 5 p.m. Each year, we see higher rates of depression associated with less exposure to sunlight; higher energy consumption across the country; higher traffic fatalities with more Americans driving in the dark; higher incidence of crime; and a steep decline in retail sales with fewer consumers willing to shop at night.

Why do we do this to ourselves? Why do we observe a time change that ultimately hurts small businesses and makes life more difficult for individuals struggling with anxiety and depression? Our economy is on the ropes, and the number of Americans reporting mental illness has reached record levels. So why would we change our clocks this November knowing it will only make the situation worse?

This year, and every year hereafter, we should keep our clocks fixed to daylight saving time. This is the time standard we observe for most of the year anyway—from the second Sunday in March to the first Sunday in November. The public health, social and economic benefits of making this change are manifold.

Research suggests an association between the biannual clock change and not just seasonal affective disorder but stroke and cardiac arrest as well. By allowing more people to commute home during daylight hours, permanent DST could likewise decrease the risk of car accidents, saving more than 360 lives each year, according to a meta-study by Rutgers researchers.

What’s more, making year-round DST and having fewer hours of darkness could help reduce crime. According to the Brookings Institute, robbery rates fall by an average of 7% when DST begins. When Congress extended DST by four weeks in 2007, it resulted in $59 million in annual social cost savings because of a reduction in robberies.

Then, of course, there’s the economy. A study conducted by JPMorgan Chase revealed that consumer spending drops by about 3.5% when the nation makes the switch back to standard time—a result of fewer daylight hours in the evening. This amounts to millions of dollars lost by retailers and small businesses each year. Making DST permanent, however, would push back sunsets to reasonable hours, encouraging shopping and retail sales during the winter months.

Given the obvious benefits of making DST permanent, no wonder there’s a groundswell of support for making this change across US time zones. As of this year, 32 state legislatures have introduced bills to abolish the time change in November.

There’s just one catch: states can’t make the switch without federal approval. That’s why Senator Marco Rubio (R-FL) has introduced the Sunshine Protection Act, which would eliminate the return to standard time to make DST year-round across the country. The President himself has endorsed this legislation, and it has garnered widespread bipartisan support from senators in the heartland and on both coasts.

Over 42 years of Senate service, I made it my life’s mission to advance commonsense solutions to the nation’s most pressing problems. In the process, I passed more bills into law than anyone alive today. All of that is to say, I know a good, bipartisan solution when I see one—and the Sunshine Protection Act is exactly that. Making DST permanent would be a shot in the arm for our economy and a boon to millions of Americans suffering from anxiety and depression. It’s also one of the few bills that stands any chance of passing in a divided Congress, which is why I call on our leaders in Washington to act today to get it across the finish line.

We are making significant progress in the fight against COVID-19, and making DST year-round would only help us advance the line. Now is not the time to fall back. 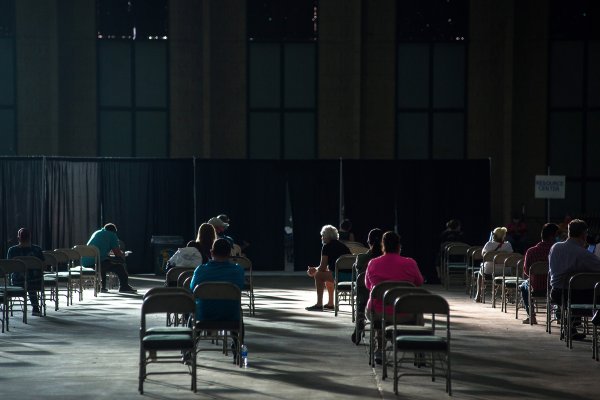 America's Richest Have Taken $50 Trillion
Next Up: Editor's Pick