I’m a Muslim Iranian-American With a Sept. 11 Birthday. Here’s How I’ve Come to Terms With My Identity

My ninth birthday fell on a school day, a bright and clear-skied Tuesday in September. I expected my mom to bring cupcakes to school during lunch, a tradition I loved because for one day each year, I knew I wouldn’t have to feel like the weird bookworm, the Iranian American, the outsider who couldn’t kick a soccer ball to save his life. I would be celebrated. But that year, no cupcakes. I went home to a dark house, disappointed.

I was too young to know what it meant that my birthday fell on 9/11.

People are always surprised when I tell them my birthday is Sept. 11. They’ll raise their eyebrows, or just flat-out say, “Ouch.” Given that I’m also visibly Middle Eastern, I get it. 9/11 was a day that changed America forever. It changed my life forever, too.

During recess, boys would ask me why “my people” had attacked the Twin Towers. I was taunted and called names, like so many other Muslim and Middle Eastern people at that time. I was already used to feeling like an outsider. Now I was also a “terrorist.”

And there was something else: I’m gay. Growing up in suburban Virginia, I didn’t think I would ever come out. To be Iranian in post-9/11 America was one thing, but to be gay, too? One oppressed identity was enough to make me feel isolated. These two together felt impossible. After all, I had never met a gay Iranian before. The only time I would ever hear those two words together, gay and Iranian, were in articles stating that homosexuality was still punishable by death in Iran. My identity felt like a contradiction. The kind of equation you punch into the identity calculator and get an error message.

When I did finally come out in college, I kept those two parts of my life separate. It wasn’t hard. I just left out certain details about my weekends and my friends in phone calls back home, and I distanced myself from parts of my heritage. I had, in effect, put up a wall between the me who existed at college in New York, who went on dates with boys and danced to Robyn at gay bars, and the me who went home and was a good Iranian son.

But that wall didn’t always protect me. On June 12, 2016, I opened Twitter and read that a Muslim man had killed 49 people at the gay club Pulse in Orlando. I felt instantly sick. It was the manifestation of my deepest shame—the two parts of my identity that I had struggled with so much, suddenly set at odds with one another on a violent and public stage. And I couldn’t even turn to my family for support.

That insidious error message returned again soon after. On Donald Trump’s Inauguration Day, I was watching the New York Times live stream of the Gays for Trump DeploraBall Gala (oh, the irony). The reporter asked one attendee what he thought Trump would do for the LGBTQ community. His response? “Protect us from radical Islam.”

Muslim Americans are far from the only group that’s been villainized in the U.S. Our country was founded on racist ideals. And every day in Trump’s America, it seems like a different identity is under attack. When our leaders complain about “radical Islam,” when they tell American congresswomen to “go back” to the “crime infested places from which they came,” when they stoke the flames of systemic racism and when they discriminate against LGBTQ folks, what they’re saying is: You don’t belong here. And it’s impossible not to internalize that.

But I learned something: if you’re lucky, you’ll find people in the world whose mere existence will start to chip away at all the prejudice you’ve collected inside of yourself. Two years ago, I traveled to Rome for a summer. There, I met a poet and bartender named Jahan, who was also Iranian. Jahan wore pearls and nail polish, and yet he looked like he could be my cousin. He hosted literary readings at his crowded, sweaty bar in Trastevere, read Rumi quatrains and told long, animated stories.

Jahan was Iranian, and he was also queer. He was both of those in the same breath, and he accepted himself proudly.

Only people who have experienced a certain level of discrimination and exclusion, who know what that error message feels like, can understand how powerful it is to encounter someone so like you, and so at peace with himself. Meeting Jahan, watching the way he carried himself, I began to question all the narratives I had absorbed about what it means to be Muslim, Iranian and gay—and realize how artificial they all were. It struck me that not only were both parts of my identity acceptable, but they could also coexist and complement each other. My Iranian culture might not have to detract from my queer side and vice versa. Maybe, I started to think, I didn’t have to carry these feelings of shame and contradiction.

Historically, Iranians are prideful; we’re not known for being silent. We are tolerant—Cyrus the Great famously ordered the first bill of human rights. And we are storytellers. Maybe I could embrace those things. Maybe other people could too—or maybe their opinions never really mattered.

As I turn another year older on this historically tragic day, I’m feeling surprisingly hopeful, in spite of everything. Every day, more and more Americans are standing up against this idea that there are people among us who don’t belong. Because we do. We belong wherever we are in all of our messy, seemingly incompatible truths—no matter race, color, ethnicity, gender, sexuality, religion, ability, socioeconomic status or any combination therein. Perhaps I’m being overly optimistic—and sometimes I still feel overwhelmed by doubt and recede back into myself. But what other choice do I have? I’m tired of giving into the headlines, the stereotypes, the hate; that noise will never be fully silenced, but I can fight to shout proudly over it. I can choose to see my two identities as powerful and perfectly compatible—no error message. 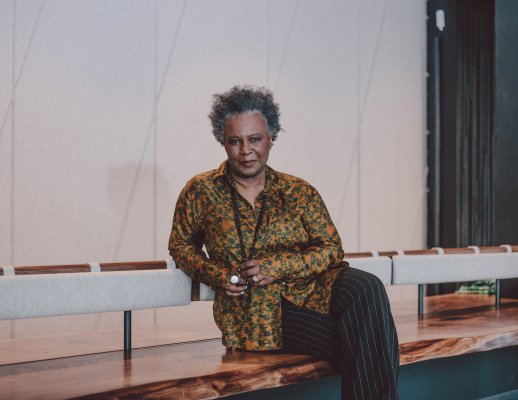 Poet Claudia Rankine on Just Us and Unearthing the Raw Truths of Anti-Black Racism
Next Up: Editor's Pick