At an Aug. 22 “Save the Children” rally in St. Paul, Minn., protesters trumpet elements of the QAnon conspiracy theory
Stephen Maturen—Getty Images
By Charlotte Alter/Kenosha, Wis.

Kelly Ferro is a busy mom on her way to the post office: leather mini-backpack, brunet topknot, turquoise pedicure with a matching ombré manicure. A hairdresser from Kenosha, Wis., Ferro didn’t vote in 2016 but has since become a strong supporter of Donald Trump. “Why does the news hate the President so much?” she says. “I went down the rabbit hole. I started doing a lot of research.”

When I ask what she means by research, something shifts. Her voice has the same honey tone as before, and her face is as friendly as ever. But there’s an uncanny flash as she says, “This is where I don’t know what I can say, because what’s integrated into our system, it stems deep. And it has to do with really corrupt, evil, dark things that have been hidden from the public. Child sex trafficking is one of them.”

Ferro may not have even realized it, but she was parroting elements of the QAnon conspiracy theory, a pro-Trump viral delusion that began in 2017 and has spread widely over recent months, migrating from far-right corners of the Internet to infect ordinary voters in the suburbs. Its followers believe President Trump is a hero safeguarding the world from a “deep state” cabal of Satan-worshipping pedophiles, Democratic politicians and Hollywood celebrities who run a global sex-trafficking ring, harvesting the blood of children for life-sustaining chemicals.

None of this is even remotely true. But an alarming number of Americans have been exposed to these wild ideas. There are thousands of QAnon groups and pages on Facebook, with millions of members, according to an internal company document reviewed by NBC News. Dozens of QAnon-friendly candidates have run for Congress, and at least three have won GOP primaries. Trump has called its adherents “people that love our country.”

In more than seven dozen interviews conducted in Wisconsin in early September, from the suburbs around Milwaukee to the scarred streets of Kenosha in the aftermath of the Jacob Blake shooting, about 1 in 5 voters volunteered ideas that veered into the realm of conspiracy theory, ranging from QAnon to the notion that COVID-19 is a hoax. Two women in Ozaukee County calmly informed me that an evil cabal operates tunnels under the U.S. in order to rape and torture children and drink their blood. A Joe Biden supporter near a Kenosha church told me votes don’t matter, because “the elites” will decide the outcome of the election anyway. A woman on a Kenosha street corner explained that Democrats were planning to bring in U.N. troops before the election to prevent a Trump win.

It’s hard to know exactly why people believe what they believe. Some had clearly been exposed to QAnon conspiracy theorists online. Others seemed to be repeating false ideas espoused in Plandemic, a pair of conspiracy videos featuring a discredited former medical researcher that went viral, spreading the notion that COVID-19 is a hoax across social media. (COVID-19 is not a hoax.) When asked where they found their information, almost all these voters were cryptic: “Go online,” one woman said. “Dig deep,” added another. They seemed to share a collective disdain for the mainstream media–a skepticism that has only gotten stronger and deeper since 2016. The truth wasn’t reported, they said, and what was reported wasn’t true.

This matters not just because of what these voters believe but also because of what they don’t. The facts that should anchor a sense of shared reality are meaningless to them; the news developments that might ordinarily inform their vote fall on deaf ears. They will not be swayed by data on coronavirus deaths, they won’t be persuaded by job losses or stock market gains, and they won’t care if Trump called America’s fallen soldiers “losers” or “suckers,” as the Atlantic reported, because they won’t believe it. They are impervious to messaging, advertising or data. They aren’t just infected with conspiracy; they appear to be inoculated against reality.

A man in a QAnon shirt appears outside a Trump rally in Tulsa, Okla., on June 20
Sinna Nasseri

Democracy relies on an informed and engaged public responding in rational ways to the real-life facts and challenges before us. But a growing number of Americans are untethered from that. “They’re not on the same epistemological grounding, they’re not living in the same worlds,” says Whitney Phillips, a professor at Syracuse who studies online disinformation. “You cannot have a functioning democracy when people are not at the very least occupying the same solar system.”

American politics has always been prone to spasms of conspiracy. The historian Richard Hofstadter famously called it “an arena for angry minds.” In the late 18th and early 19th centuries, Americans were convinced that the Masons were an antigovernment conspiracy; populists in the 1890s warned of the “secret cabals” controlling the price of gold; in the 20th century, McCarthyism and the John Birch Society fueled a wave of anti-Communist delusions that animated the right. More recently, Trump helped seed a racist lie that President Barack Obama was not born in the U.S.

As a candidate in 2016, Trump seemed to promote a new wild conspiracy every week, from linking Ted Cruz’s father to the Kennedy assassination to suggesting Supreme Court Justice Antonin Scalia was murdered. In interviews at Trump rallies that year, I heard voters espouse all manner of delusions: that the government was run by drug cartels; that Obama was a foreign-born Muslim running for a third term; that Hillary Clinton had Vince Foster killed. But after four years of a Trump presidency, the paranoia is no longer relegated to the margins of society. According to the Pew Research Center, 25% of Americans say there is some truth to the conspiracy theory that the COVID-19 pandemic was intentionally planned. (Virologists, global health officials and U.S. intelligence and national-security officials have all dismissed the idea that the pandemic was human-engineered, although Trump Administration officials have said they have not ruled out the possibility that it was the result of an accident in a lab.) In a recent poll of nearly 1,400 people by left-leaning Civiqs/Daily Kos, more than half of Republican respondents believed some part of QAnon: 33% said they believed the conspiracy was “mostly true,” while 26% said “some parts” are true.

Over a week of interviews in early September, I heard baseless conspiracies from ordinary Americans in parking lots and boutiques and strip malls from Racine to Cedarburg to Wauwatosa, Wis. Shaletha Mayfield, a Biden supporter from Racine, says she thinks Trump created COVID-19 and will bring it back again in the fall. Courtney Bjorn, a Kenosha resident who voted for Clinton in 2016 and plans to vote for Biden, lowered her voice as she speculated about the forces behind the destruction in her city. “No rich people lost their buildings,” she says. “Who benefits when neighborhoods burn down?”

But by far the greatest delusions I heard came from voters on the right. More than a third of the Trump supporters I spoke with voiced some kind of conspiratorial thinking. “COVID could have been released by communist China to bring down our economy,” says John Poulos, loading groceries into his car outside Sendik’s grocery store in the Milwaukee suburb of Wauwatosa. “COVID was manufactured,” says Maureen Bloedorn, walking into a Dollar Tree in Kenosha. She did not vote for Trump in 2016 but plans to support him in November, in part because “he sent Obama a bill for all of his vacations he took on the American dime.” This idea was popularized by a fake news story that originated on a satirical website and went viral.

On a cigarette break outside their small business in Ozaukee County, Tina Arthur and Marcella Frank told me they plan to vote for Trump again because they are deeply alarmed by “the cabal.” They’ve heard “numerous reports” that the COVID-19 tents set up in New York and California were actually for children who had been rescued from underground sex-trafficking tunnels.

Arthur and Frank explained they’re not followers of QAnon. Frank says she spends most of her free time researching child sex trafficking, while Arthur adds that she often finds this information on the Russian-owned search engine Yandex. Frank’s eyes fill with tears as she describes what she’s found: children who are being raped and tortured so that “the cabal” can “extract their blood and drink it.” She says Trump has seized the blood on the black market as part of his fight against the cabal. “I think if Biden wins, the world is over, basically,” adds Arthur. “I would honestly try to leave the country. And if that wasn’t an option, I would probably take my children and sit in the garage and turn my car on and it would be over.”

The rise in conspiratorial thinking is the product of several interrelated trends: declining trust in institutions; demise of local news; a social-media environment that makes rumor easy to spread and difficult to debunk; a President who latches onto anything and anyone he thinks will help his political fortunes. It’s also a part of our wiring. “The brain likes crazy,” says Nicco Mele, the former director of Harvard’s Shorenstein Center, who studies the spread of online disinformation and conspiracies. Because of this, experts say, algorithms on platforms like Facebook and YouTube are designed to serve up content that reinforces existing beliefs–learning what users search for and feeding them more and more extreme content in an attempt to keep them on their sites.

All this madness contributes to a political imbalance. On the right, conspiracy theories make Trump voters even more loyal to the President, whom many see as a warrior against enemies in the “deep state.” It also protects him against an October surprise, as no matter what news emerges about Trump, a growing group of U.S. voters simply won’t believe it. On the left, however, conspiracy theories often weaken voters’ allegiance to Biden by making them less likely to trust the voting process. If they believe their votes won’t matter because shadowy elites are pulling the country’s strings, why bother going through the trouble of casting a ballot?

Experts who follow disinformation say nothing will change until Facebook and YouTube shift their business model away from the algorithms that reward conspiracies. “We are not anywhere near peak crazy,” says Mele. Phillips, the professor from Syracuse, agrees that things will get weirder. “We’re in trouble,” she adds. “Words sort of fail to capture what a nightmare scenario this is.”

But to voters like Kelly Ferro, the mass delusion seems more like a mass awakening. Trump “is revealing these things,” she says serenely, gesturing with her turquoise-tipped fingernails. Americans’ “eyes are being opened to the darkness that was once hidden.”

After yoga in the morning, Ferro says, she often spends hours watching videos, immersing herself in a world she believes is bringing her ever closer to the truth. “You can’t stop, because it’s so addicting to have this knowledge of what kind of world we’re living in,” she says. “We’re living in an alternate reality.”

With reporting by Leslie Dickstein and Simmone Shah 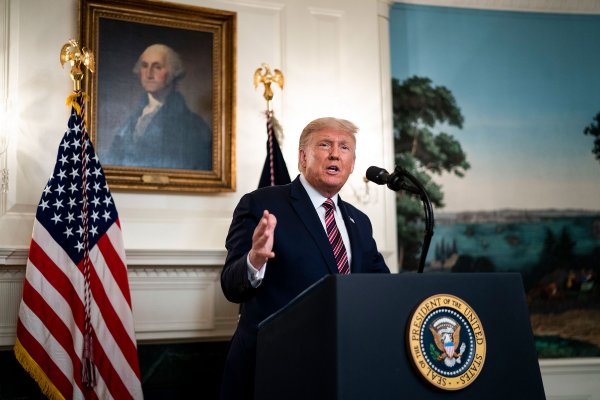