This article is part of the The D.C. Brief, TIME’s politics newsletter. Sign up here to get stories like this sent to your inbox every weekday.

At this point four years ago, then-candidate Donald Trump held a massive lead of 20 points over Hillary Clinton among military voters. This time around, he’s struggling to keep up. A new Military Times poll revealed Democratic presidential nominee Joe Biden leads Trump by about four percentage points among active-duty troops.

And that was before today’s bombshell report published in the Atlantic. The article outlines a number of instances when President Donald Trump derided U.S. service members, even describing the country’s war dead as “losers” and “suckers.”

Trump and several top aides have rushed to deny the allegations. Trump told reporters late Thursday that he “would be willing to swear on anything that I never said that about our fallen heroes. There is nobody that respects them more.”

That hasn’t dampened a backlash on social media among military veterans. Retired Maj. Gen. Paul Eaton, a frequent Trump critic, urged Twitter followers to vote against the president, posting a widely shared video in which he relayed a story about how his father was shot down over Vietnam. “I am stunned that anybody in the United States military would consider you anything but a loser or a sucker,” Eaton said. “You’re no patriot.”

Other veterans posted similar statements in response to the article, which described how Trump cancelled a scheduled visit to the Aisne-Marne American Cemetery near Paris in 2018 because he didn’t see a reason why he should honor people who managed to get themselves killed, nor did he want to get rained upon in front of TV cameras. “Why should I go to that cemetery? It’s filled with losers,” the report quoted Trump as saying.

Biden, whose late son, Beau Biden, served in Iraq, issued a statement after the Atlantic article was published Thursday that said the comments were yet another sign Trump is unfit for the presidency. If the quotes are true, he said, it’s “another marker of how deeply President Trump and I disagree about the role of the president of the United States.”

The anonymous allegations in the Atlantic article would hardly be the first time the president, who received five military deferments, one for bone spurs in his heels that kept him out of the Vietnam War, has disparaged the records of military members. As a candidate in 2015, the president said he was no supporter of Sen John McCain, who was held captive in Vietnam for nearly six years after his airplane was shot down over Hanoi. “He was a war hero because he was captured,” Trump said. “I like people who weren’t captured.”

Trump’s interactions with military families have also come under scrutiny, particularly the question of how he has expressed sympathy for those who have lost loved ones in the line of duty. Individual parents and partners have come forward to say whether or not the President contacted them directly.

Eleven Gold Star families, those who lost loved ones serving the country’s military, wrote a joint letter in 2016 to the then-Republican presidential nominee, accusing him of “cheapening the sacrifice” of their deceased relatives in the way he responded to the parents of Captain Humayun S.M. Khan, who died in Iraq in 2004. Trump criticized his father and mother after they spoke out against him at the 2016 Democratic National Convention.

In total, there are 1.4 million active duty service members, or less than one half of one percent of the U.S. population. But as a barometer of Trump’s base, and an indicator of his ability to drive turnout to counter mobilized Democrats across the country, Trump’s tanking numbers with the military are a bad sign for his campaign. 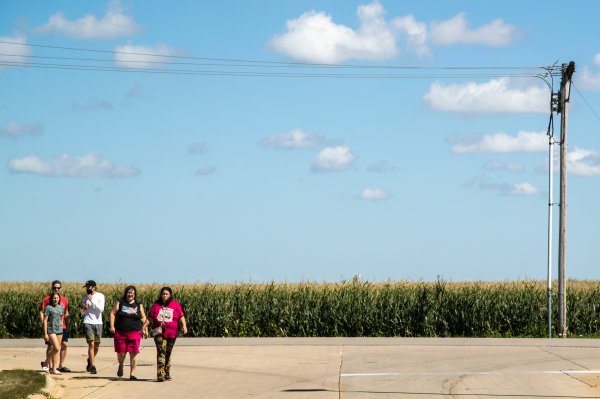 Rural Americans Have Faced Outsize Hardship Under President Trump. Will They Still Vote for Him?
Next Up: Editor's Pick