‘This Film Is Sounding an Alarm.’ What Cuties Director Maïmouna Doucouré Wants Critics to Know About Her New Film

Maïmouna Doucouré did not imagine that her award-winning debut feature film—a coming-of-age tale drawn from her personal experiences—would spark international controversy and calls for a boycott. “For me, this film is sounding an alarm,” the French Senegalese director told TIME, ahead of the worldwide release of Cuties on Netflix on Sept. 9. “This film tries to show that our children should have the time to be children, and we as adults should protect their innocence and keep them innocent as long as possible.”

But since Netflix’s promotional materials for Cuties launched on Aug. 19, Doucouré has received intense criticism, attacks and even death threats—by people who have not even seen the film. “It’s been an odd time for me, because this film started its career very, very well,” says Doucouré, who won the prestigious Directing Award in the World Cinema Dramatic Competition section of Sundance Film Festival earlier this year. Cuties was one of the first to be invited to the festival and the worldwide rights were acquired by Netflix before its premiere.

Yet the furor has grown since the film’s release, as “#CancelNetflix” became the top trending topic in the U.S. on Twitter on Sept. 10 in response to Cuties. In a statement to TIME, a Netflix spokesperson called Cuties “a social commentary against the sexualization of young children,” adding that “It’s an award-winning film and a powerful story about the pressure young girls face on social media and from society more generally growing up — and we’d encourage anyone who cares about these important issues to watch the movie.”

In a step away from the original French theatrical poster, Netflix’s artwork portrayed the movie’s four young female lead actors in provocative clothing and poses. Observers on social media jumped to the conclusion that the film sexualizes young children. At least two petitions garnering nearly 500,000 signatures are circulating calling for Netflix to pull the film, with one alleging that its content is “for the viewing pleasure of pedophiles.” The streaming service apologized on Aug. 20 for its “inappropriate” artwork for the film’s advertising. On Sept. 3, Turkey’s media watchdog ordered Netflix to remove the film from its platform in the country, based on allegations that it contains images of child exploitation.

But Doucouré’s work strikes the opposite chord. Already released in French cinemas on Aug. 19 to a positive reception, Cuties follows 11-year-old Amy, a young Senegalese Muslim girl growing up in a poor neighborhood in Paris. Searching for a sense of belonging, Amy becomes increasingly transfixed with a local group of young dancers, the eponymous Cuties. Inspired by music videos and social media, the girl group learn and practice provocative and sexualized choreography in preparation for a dance competition, a world far from her conservative home life.

Cuties has received overwhelming support and acclaim from the international film industry, the French government and viewers in France and beyond. Speaking with TIME from her native Paris, Doucouré says she can understand the reaction from those who saw only Netflix’s advertising for the film, which “didn’t really represent the film properly.” “I just hope that these people will watch the film, because then they will realise we are actually on the same side of this battle against the hypersexualization of children,” she says. Since the controversy over the poster, actor Tessa Thompson, who saw Cuties at Sundance, as well as senior ministers in the French government, have defended Doucouré and the film.

‘What it means to become a woman’

As with other French filmmakers of West African descent, including Ladj Ly (Les Misérables) and Mati Diop (Atlantics), Doucouré’s personal experiences have deeply informed her art. She grew up in Paris to Senegalese Muslim parents, living with her nine siblings and two mothers in a polygamous family. “We always had fun,” she remembers. Her 2016 short film MAMAN(S), which also won an award at Sundance that year, explored similar themes of complex family dynamics and growing up between different cultures. It’s Doucouré’s own lived history that forms the connections between MAMAN(S) and Cuties. “I was trying to recreate the little girl who I was at that age, giving her a voice, and looking at what it means to become a woman,” Doucouré says of Amy, Cuties’ protagonist.

For Kim Yutani, the director of programming at Sundance, the film’s strength lies in its authenticity. “For someone like Maïmouna, her experience as a Black, French, Muslim woman, you can feel that in Cuties. She understands that world, she has lived in that world, and the ability that she has to bring us into that experience is incredibly special,” says Yutani, who was familiar with and a fan of Doucouré from her earlier work MAMAN(S). And while festival programmers often intend for their films to spark conversation, Yutani emphasizes that Sundance stands fully behind Doucouré amid the controversy. “We are relying on our audiences to have intelligent conversations that are directly related to the films after they have seen the films,” she says. Doucouré also has the support of the French government, who have expressed their wish to use Cuties as an educational tool for teachers, and have invited her to be part of a working group to combat the hypersexualization of children in society.

How Doucouré made a realistic portrait of pre-teen girls

Doucouré’s initial inspiration came from seeing a group of young girl dancers perform onstage at a neighborhood gathering in the suburbs of Paris. In the audience were several African mothers and mothers wearing the veil, and on the stage were young girls dancing sensually and wearing revealing clothing. “It was a real culture shock,” says. “It’s why I thought about myself, my childhood.”

Doucouré, who is a self-taught filmmaker, then spent 18 months doing research, interviewing hundreds of young, pre-teen girls, gathering their stories and experiences of being exposed to adult material and sexualized images on social media. Many of the film’s scenes are derived from the anecdotes young girls had told Doucouré. Amy steals her cousin’s smartphone and takes selfies with face filters that make her look much older than she really is, staring at the screen as the likes start to amass on social media. Later, she takes a nude photograph which spreads rapidly among her peers at school, leading the Cuties to reject her. “There were actually many stories which were so far beyond what you see in the film, and I just did not have the artistic courage to tell those stories on the screen,” says Doucouré. “Stories of young girls who are 12 years old and prostituting themselves. All of these stories just made my blood run cold, and it made me even more determined to make this film, and to speak out about this issue that is so prevalent in today’s society.”

The casting and production process too emphasized realism. Doucouré and her team saw almost 700 young girls in their casting search, and those who were chosen for the film are all acting for the first time. “Because they were children, I worked in a specific way,” Doucouré says, describing the games she played on set with the children and how she encouraged them to visualize themselves as different animals to help with the characterization. It is this combination of childlike naivety and overt sexuality that sometimes makes for uneasy viewing, as viewers are forced to position their gaze on the bodies of Amy and the Cuties.

The real message behind Cuties

Doucouré explains that she is telling this story through Amy’s eyes, challenging the audience by showing the hypersexualization of children has become normalized. Cuties explores how girls become women, sometimes sooner than they should, forced into adulthood by the society they live in and the media they consume. “When I was young, I also saw a lot of injustices around me lived by women,” says Doucouré. “We’re used to saying that women in other cultures are oppressed, but the question that I had when making the film was: Isn’t the objectification of a woman’s body that we often see in Western culture another kind of oppression?”

Cuties’ themes also speak to Doucouré’s experience as a Black, female director, working in a predominantly white, male industry. Speaking at the Cesar Awards in 2017, where she received an accolade for MAMAN(S), Doucouré recalled how her mother reacted when she told her she wanted to work in cinema. “It’s not for us,” she recalled her mother saying. “Do you see people like you?” With Cuties, as with her own career, Doucouré is emphasizing that girls need to see barriers broken and different models of success. “This film shows with these characters how limiting it is in today’s society, to see a woman as an object and that success comes from a woman being objectified,” she says. When she was doing her research for the film, some of the young girls Doucouré interacted with told her they couldn’t believe she was a director because they thought she was too pretty for that profession. “For me, it’s dangerous to think like that. For these little girls, they don’t see some careers as compatible with their femininity,” she says. “We need to open up their horizons so they can imagine themselves in a larger role.”

Two weeks on from the initial backlash to the poster on Netflix and in the final days before the film’s launch on the platform, Doucouré has received many messages from people who had criticized her work, now apologizing and asking for forgiveness after researching her work and the film’s true message. And going forward, the director feels hopeful that the film’s critics might combine forces with her for the same cause. “I really hope that once the film comes out, they will watch it, and they will understand that those who were criticizing me were actually walking the same path as me.” 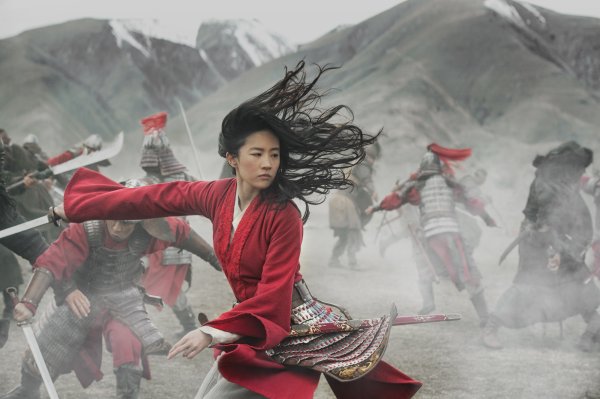 The Controversial Origins of the Story Behind Mulan
Next Up: Editor's Pick