‘This Country Has Been Bathed in Violence.’ Sen. Chris Murphy on the Torturous Cycle of Gun Crime in America

Connecticut Senator Chris Murphy’s new book, The Violence Inside Us: A Brief History of an Ongoing American Tragedy, offers a nuanced exploration of the history of violence in America, the driving forces behind the country’s fascination with firearms and why so many American citizens are impacted by gun violence.

In the book, Murphy—a Democrat who was elected to the U.S. Senate just a month before the shooting at Sandy Hook Elementary School in Newtown, Conn.—shares his personal journey in understanding just how deep-rooted violence is in America, and considers what can be done to right past wrongs as well as heal fresh wounds.

Though written before the deaths of Black Americans including George Floyd and Breonna Taylor, the book’s release coincides with widespread unrest, violence and self-reflection in America in the wake of these killings—along with a sharp increase in gun violence across the country. Speaking with TIME, Sen. Murphy discusses the current crises, the impact of President Trump’s often incendiary rhetoric and why centering the voices of people, and communities, affected by gun violence is key to reform.

TIME: The Violence Inside Us balances a history of America’s relationship with violence and guns with your own personal history, specifically your work on gun control legislation after Sandy Hook. What went into your decision to together weave the personal and the politics?

Sen. Murphy: My hope is that my story, and my awakening to the epidemic of gun violence in America over the last seven years, is an invitation to readers to go through some kind of that same awakening. What we need in this country is more activists, people who are willing to go to the mat and become part of this movement.

[In the book], I’m very honest about my embarrassment that I didn’t work on this issue before 2012. I’m trying to make up for lost time. I hope that others realize it’s never too late to step up.

Similarly, the book balances discussion of America’s gun laws and gun crime with what you describe as a near-instinctual predisposition to violence. Do you see these two issues as intrinsically linked?

I think a lot of people are asking bigger questions today. People want to know why this level of violence happens in the United States and almost nowhere else to the same degree.

Read more: My Son Was Killed at Sandy Hook. I Can’t Go Back in Time, But I Can Try to Change the Future

And the answer is not simply our gun laws. The answer is that we are a violent species to begin with; this country has been bathed in violence, organized by violence since our very founding. The case I make is that America is likely destined to be a more violent place than other nations, but we choose to throw gasoline on a smoldering fire by having the world’s loosest gun laws.

The U.S. has witnessed a summer of violence and protests largely spurred by gun violence and the killing of Black Americans. How does this fit into your book’s thesis, and what do you think of how law enforcement has responded to such widespread unrest?

I wrote this book a year ago, before the events of this summer [but] in the book, I tell the story of the Newark riots in the late 1960s and how the public impression was that that violence was committed by African Americans. In fact, most was committed by law enforcement.

Black demonstrators face armed federal soldiers in Newark on July 17, 1967 during riots that erupted in the city.
AFP/Getty Images

In the aftermath of those riots, the conclusion [of a commission established by President Lyndon Johnson] was that a system of white oppression of African-Americans led to that summer of unrest in Newark. If you read that commission’s report, you’ll be saddened to come to the realization that very little has changed. Too many African-Americans are still living in poverty, too many people of color are being pushed into pathways of violence because they have no other means of economic advancement and law enforcement comes down violently on the backs of these same communities. If we don’t get our hands wrapped around the legitimate complaints and grievances of communities of color then nothing is going to change.

We shouldn’t be excusing violence, no matter who commits it, but we should be spending our time listening to what these protesters are asking for and doing something about it. They didn’t do that in the late 1960s. We should learn from their mistakes today.

During his visit to Kenosha, Wis., on Monday following the police shooting of Jacob Blake, President Trump put “law and order” rhetoric front and center. How do you think his words and actions have impacted violence in this country?

People listen to the President of the United States. When he’s not willing to condemn a young man with an assault weapon who murdered two people in the middle of a protest, others pick up on that cue and come to the conclusion that vigilante justice is okay. I can’t tell you whether [his] actions and words have directly led to incidences of police brutality but what I do know is that, in general, this president has done nothing to tamp down violence. He has done everything to incentivize it.

You write about how direct investment in communities leads to less violence, which sounds similar to some arguments proposed by those in support of defunding police departments. Would you support an idea like that?

It’s not a coincidence that the most violent neighborhoods in the country are the poorest. If we don’t start recognizing that and doing something about it, then there’s no set of gun laws that can save us. I came out with an initiative a month ago to end the federal funding of police in our schools and shift that money towards the hiring of social workers and guidance counselors and school psychologists. That’s the kind of reorientation of funding that we need.

How can those in your position realistically create legislation to protect and support these communities, which have long been disenfranchised?

We need to be listening to these communities that have seen spikes in gun violence and respond. But it also needs to be about an economic agenda that empowers families. I also hope that, as we try to climb out of this massive depression that we’re in, we can rebuild our economy on a better platform and that it gives people living in these neighborhoods hope that they can actually break the cycle of poverty, which will also break the cycle of violence.

Are you still hopeful that we can have real change—legislative or societal—in terms of gun violence in this country?

I am. I make some concessions in this book; I’m willing to make concessions [to] find areas of compromise. It will surprise some people that I make the argument in this book that there is a constitutional right for people to own a firearm—though the Constitution, I argue, allows for that right to be heavily regulated.

Read more: Guns Have Divided America. Here’s What Happens When 245 People Try to Meet in the Middle

Nearly every week I’m talking to my Republican colleagues about how we come together. There are more Republicans today than ever before who are willing to vote for anti-gun violence measures—in part because the NRA is weaker and the anti-gun violence movement is stronger, but also because our arguments are becoming more persuasive.

I hope that this book educates people to the point where they’re willing to become more active members of the anti-gun violence movement. 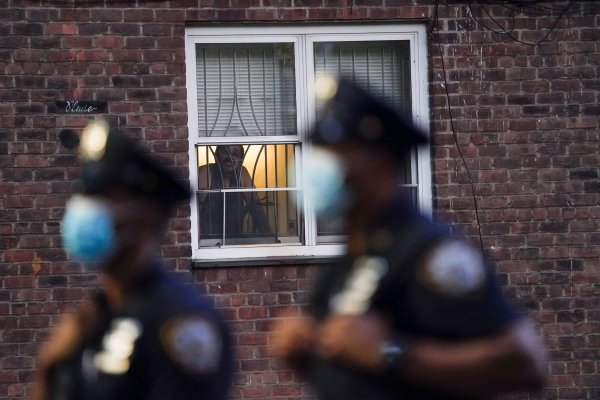