The tens of thousands of protesters who took to the National Mall Friday, marking the 57th anniversary of the March on Washington, showed the power of the movement against police brutality that has mobilized across America this summer. But the demonstration was tinged by concern that efforts to suppress and intimidate supporters will hamper their ability to turn protest now into votes in the fall.

Many demonstrators said their concerns start at the top with President Donald Trump. Trump has threatened to send law enforcement to the polls, raising accusations of voter intimidation. His administration pursued cost-cutting measures at the postal service that experts said could slow the delivery of mail ballots. He’s pursued lawsuits in multiple states over the expansion of vote by mail and drop boxes. He’s argued without evidence that the election will be full of widespread fraud. And he’s previously refused to commit to accepting the results.

In one recent survey by Democracy Fund + UCLA Nationscape Project, more than 40% of Americans said they had doubts about the fairness of the presidential election.

“If he can get enough people to mistrust the system by sowing seeds of doubt in the integrity of this coming election, then people won’t vote. People who would have otherwise voted [and] tried to vote him out will say, ‘Eh there’s no point in even bothering,’” says Abena Gyebi, a finance communications manager from New York City. Gyebi plans to vote in person.

Berthilde Dufrene, a nurse at a New York state prison who attended the march on Friday, says she is concerned her vote may not be counted. She has requested a ballot through the mail and plans to fill it out at home and deliver it to the ballot box on election day. “The Trump administration is a corrupt administration,” she says. “I see what they are doing with the Post Office and voter suppression, so I am concerned that they will cheat, they will steal, they will lie to keep this man in power.”

Rev. Al Sharpton, center, marches next to Yolanda King, Andrea Waters King and Martin Luther King, III during the "Commitment March: Get Your Knee Off Our Necks" protest against racism and police brutality, in Washington, D.C., on Aug. 28, 2020.
Jonathan Ernst—Pool/AFP/Getty Images

The theme of the march matched those sentiments, with leaders urging the assembled protesters to remain focused on getting out the vote between now and Nov. 3.

“We didn’t come out and stand in this heat because we didn’t have anything to do,” said Rev. Al Sharpton, one of the leaders of the march. “We came to let you know that we will come out by these numbers in the heat and stand in the heat. That we will stand in the polls all day long.” And he admonished the demonstrators to hold accountable lawmakers who have not responded to this summer’s protests by passing police reform measures. “Demonstration without legislation will not lead to change,” Sharpton said. With police reform bills deadlocked in Congress, Black men and women are among the voters with the most at stake in this year’s election.

Trump is not the only concern among those seeking to turn protest into votes. Across the country, voting-access advocates and election officials have also been realistic about the possibility that the COVID-19 pandemic, by necessitating extraordinary adjustments to the nation’s patchwork election system, will further hamper voter turnout in the fall. Many of the primaries held after the surge of COVID-19 cases in March were riddled with problems.

The voting advocates’ and election experts’ advice to voters includes voting as soon as they know who they support in order to avoid a build-up at polling locations on Election Day, and having a plan in place for how they are going to cast their ballot.

For their part, many of the protesters appeared to have voting plans and several said they had already begun researching their options for how they would return their ballot. “What I think people should do is absolutely go and drop your ballot into the [drop] box, or go and take it to the election folks yourself. I do not trust anything about this post office at this point. Not the postal workers, but the folks who are in charge,” says April Dyson, a lawyer from Washington, DC, at the march. Dyson noted she hadn’t received mail in five days.

Ultimately, the motivation to vote may come not from the exhortations of Sharpton or voting advocates, however, but from the cause that sparked Friday’s march, titled Get Your Knee Off Our Necks, and the other organized demonstrations throughout the summer: continuing racial injustice and police brutality against Black Americans. “What we need is change. And we’re at a point where we can get that change, but we have to stand together. We have to vote,” said Tamika Palmer, the mother of Breonna Taylor, one of the speakers at the march. Taylor, an unarmed Black woman, was shot by police in her Louisville home when they entered it on March 13 this year with a no-knock warrant.

The crowd erupted into call and response chants: 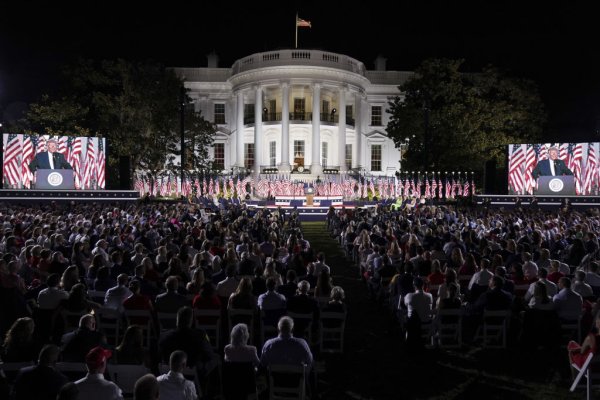 Donald Trump's Speech Offers a Blueprint For His Campaign
Next Up: Editor's Pick