An Illinois teen has been arrested in Illinois in connection with the deaths of two people shot during protests in Kenosha, Wis. on Tuesday night. In recent days, demonstrators in the city have rallied against the shooting of Jacob Blake, an unarmed Black man who was shot multiple times on Sunday by an officer from the Kenosha Police Department.

17 year-old Kyle Rittenhouse was arrested Wednesday and charged with first-degree intentional homicide in Antioch, Ill., according to a statement from the Antioch Police Department. Rittenhouse is being held “pending an extradition hearing to transfer custody from Illinois to Wisconsin.”

While across state lines, Kenosha is about 15 miles away from Antioch.

Tuesday had marked the third straight night protesters took to the streets in response to the police shooting. A large group of demonstrators amassed outside the city’s courthouse, where authorities put up a metal fence to protect the building. Items like water bottles and rocks were thrown at the police, as they fired tear gas and rubber bullets at the protesters.

But it was a confrontation between protesters and armed civilians who had tasked themselves with protecting property and businesses across the city that became fatal.

Footage taken Tuesday night show a young white male carrying a firearm and shooting at protestors. In videos believed to be taken after the man had first opened fire, he is seen being chased by people and brought to the ground, only to fire at them as well before fleeing the scene.

One of the two people killed was shot in the head; the other in the chest. A third person suffered non-life-threatening gunshot wounds. The names of the deceased have not been officially released, but a GoFundMe seeking funds for funeral expenses identifies one victim as 26-year-old Anthony Huber.

“Peaceful protests are welcome. It has always been a way for the American public to speak their mind. We support that, I support that as an individual,” Kenosha Police Chief Dan Miskinis said during a Wednesday afternoon press conference addressing the shootings. “[But] we cannot support violence. When the line crosses from stating one’s opinion to taking actions and hurting people… that must stop,” he continued. “It detracts from the message.”

At the same presser, Kenosha County Sheriff David Berth was asked why the shooter was not apprehended, despite being seen walking from the scene of the second and third shootings still holding his weapon—and past police officers present. Describing the scene as “high stress” and very frenetic, Berth said that officers were left with “incredible tunnel vision.”

Berth also addressed footage appearing to show police officers thanking some armed civilians for their presence during the unrest (but prior to the shootings), and sharing supplies like water bottles with them. Officers would “toss water to anybody,” he claimed.

Demonstrators in many cities across the U.S. have accused police officers of destroying supplies like water, milk used to mute the effects of tear gas and first aid kits during recent months’ protests.

In a video widely circulated over social media, and that precipitated protests in the city, a Kenosha police officer is seen shooting Jacob Blake in the back. Blake was in the process of leaning into his vehicle, having walked away from officers called to a domestic issue.

According to civil rights attorney Benjamin Crump, Blake’s three young children were in the car when he was shot.

The officers involved have been placed on administrative leave; their identities have not been revealed.

Blake is currently recovering at a Milwaukee hospital. His father has said that he is currently paralyzed, with Crump saying it will “take a miracle” for him to be able to walk again.

“We really just need prayers,” Blake’s mother, Julia Jackson said at a Tuesday press conference prior to the fatal shootings, adding that the damage in the city does not reflect her son or her family. “Take a moment and examine your heart. Citizens, police officers, firemen, clergy, politicians, do Jacob justice on this level and examine your hearts.”

In anticipation of more protests, Governor Tony Evers said the presence of the Wisconsin National Guard will increase to around 500 members in the city as of Wednesday. The city has also laid down a “state of emergency” curfew from 7 p.m.

Without offering specifics, President Donald Trump has also tweeted that he will be “sending federal law enforcement” into Kenosha to “restore LAW and ORDER!” 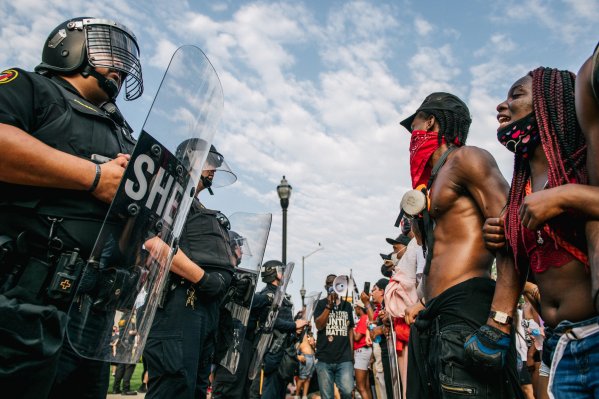 The History Behind Police and Race in Kenosha
Next Up: Editor's Pick