Joe Biden Lays Out His Closing Argument: Character and Competence

Former vice-president and Democratic presidential nominee Joe Biden and his wife Jill Biden stand on stage after he accepted the Democratic Party nomination for US president during the last day of the Democratic National Convention, being held virtually amid the novel coronavirus pandemic, at the Chase Center in Wilmington, Delaware on Aug. 20, 2020.
Olivier Douliery—AFP/Getty Images
By Philip Elliott

A version of this article first appeared in The D.C. Brief, TIME’s politics newsletter. Sign up here to get stories like this sent to your inbox every weekday.

Joe Biden has now put before us just how he plans to run the final 73 days of his campaign to return to the White House: as an empathetic warrior in touch with families’ struggles and a decent human being counting on character being on the ballot this fall. With that pitch, he planted a contrast with President Donald Trump, whom he cast as an absolute failure in leading the country through the coronavirus pandemic.

It’s a double-barrelled strategy that may well chart a path to success, especially among voters that slipped out of Democrats’ hands four years ago. Biden’s speech was perhaps his finest of his five decades in the public eye, the product of countless rewrites and deft edits. Biden understood this to be the biggest moment of his political career so far and one that demanded near-perfection. He delivered, and if he can maintain this level of discipline, it may give him his dream of the presidency nursed since the 1970s.

Biden’s convention reflected perhaps the biggest tent his Democratic Party has ever attempted to build, leaving open doors for progressive activists’ demands of clean energy, moderates’ worries about lurching too quickly to the left, activists’ pursuits of for racial and gender justice, and seniors’ fears about Social Security. It is a Frankenstein of aspiration as much as necessity, given Biden’s success over rival candidates who drew more energy but fewer votes. It lays the groundwork for gnashing and recrimination if the patchwork fails. But the freakish coalition may be enough to win, especially in the Midwest.

A new survey out today from the liberal Rust Belt Rising shows 47% of all voters in Pennsylvania, Ohio, Michigan and Wisconsin expect the coronavirus situation will improve if Biden replaces Trump. (A third of voters said it would get worse and one-fifth said they were unsure.) When asked what Trump has handled the worst, a 29% share of the electorate in those states lists the pandemic — leading the next option, fighting corruption, by a roughly 2-to-1 margin. In other words, Trump’s wins in those states four years ago may be imperiled if Biden can continue to focus on the Trump Administration’s response to the pandemic.

In his speech last night, Biden showed how he plans to meld his character and Trump’s failures in a clear message to those crucial states. Modeling empathy that Trump seems incapable of summoning, Biden brought ahead his skills as perhaps the nation’s most acclaimed eulogist. It’s as my colleague Charlotte Alter observed in June: empathy is Biden’s secret weapon. And as my colleague Molly Ball noted on the eve of Iowa’s caucuses, Biden’s resilience is one born out of grief.

Political conventions are always a distillation of the parties’ final arguments for their nominee — and against their competitor. A careful reading of what Democrats programmed remotely during the pandemic suggests they’ll continue to focus on how Biden has suffered so much during his lifetime but never wavered in his character, while Trump has not suffered and never matured.

As a package, it will be interesting to compare this to next week’s Republican version. Will they be able to make a similar argument, or will they instead choose to conjure scary realities if Biden prevails? Democrats taking victory laps today would do well to remember that while they knew how to get the hair standing up on the back of liberals’ necks, Republicans are equally skilled at inducing panic. 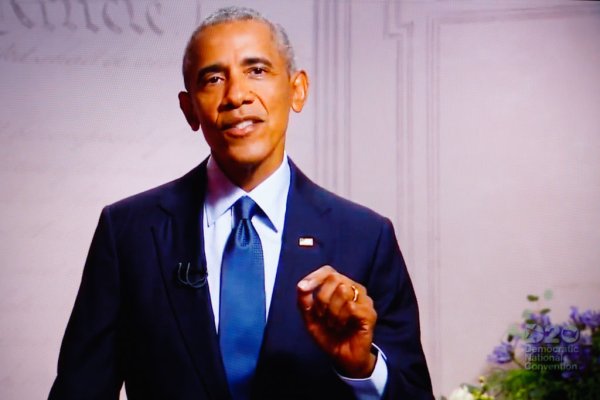 ‘Declaration of War’: Obama’s Brawl With Trump Breaks With History in a Big Way
Next Up: Editor's Pick