How the Postal Service Became Donald Trump's for the Taking

U.S. Postmaster General Louis Dejoy, who met with House Speaker Nancy Pelosi in August 5, is scheduled to testify before Congress on Aug. 21 and Aug. 24.
Alex Wong—Getty Images
By Alana Abramson

Postmaster General Louis DeJoy’s announcement on Tuesday that he would suspend much of his proposed reform agenda at the United States Postal Service (USPS) until after the election failed to placate Democratic lawmakers, who noted that the North Carolina business executive and longtime Republican donor seemed to be using his position to undermine the upcoming presidential election.

“There are still too many unanswered questions,” Michigan Sen. Gary Peters, ranking Member of the Homeland Security and Governmental Affairs Committee, which oversees the Postal Service, said in a statement Tuesday.

David C. Williams, a former Postal Service Inspector General and former member of the USPS’s Board of Governors, is among those testifying on Thursday. Williams resigned from the USPS Board of Governors in April because he was concerned about how politicized it was becoming under Trump, he told the CPC on Thursday, an effort that was being led by Treasury Secretary Steven Mnuchin. The Treasury Department is responsible for administering the $10 billion line of credit to USPS to help alleviate the financial strain exacerbated by the coronavirus. Although the Board of Governors had asked Congress for $75 billion to help with its financial losses, Republicans, led by Mnuchin, had balked at that number.

In his statement, Williams alleged that Mnuchin “insisted that all Republican appointees for the Board of
Governors and Postal Regulatory Commission come to his office to kiss the ring and receive his blessing before confirmation.”

Although Williams had privately expressed concerns to various officials prior to his testimony, he declined to speak publicly until he was given the opportunity to do so before Congress.

It is rare that the Postal Service—frequently seen by the public as one of the most popular and apolitical parts of the federal government—finds itself under such a microscope. Part of the reason for its current position is President Trump, who has repeatedly attacked the Postal Service, calling it a joke, and explaining that he opposed Democratic measures that would fund the USPS before the Election because doing so would give the agency the funds it needs to handle an influx of mail voting before the Election.

But Trump’s impulsiveness doesn’t explain everything, according to experts on the USPS and postal union representatives. When the President took office three and a half years ago, he inherited an empty Board of Governors. For years, Congress had refused to confirm any of Barack Obama’s nominees to the Board, due to infighting on both sides of the aisle. Trump was therefore handed the opportunity to fill the Board of Governors with a majority of members—many of whom are business executives with ties to the Republican party—who shared his cost-cutting vision.

“I had never heard of anything like it in the U.S. government,” says James Sauber, chief of staff for the National Association of Letter Carriers, of the empty Board of Governors. “It was pretty extraordinary.”

There are nine slots allotted for the USPS Board of Governors. They function in a capacity akin a corporate board of a company, collectively appointing a Postmaster General and Deputy Postmaster General. The board is designed to be bipartisan by nature. While a sitting President appoints members when vacancies arise, no more than five members can be from the same party, and all nominees are subject to Congressional confirmation. Members are also elected to serve for seven year terms, ensuring that their tenure lasts through at least one Presidential administration.

By 2014, there were fewer than six members on the Board of Governors, which meant the body lacked a quorum and was unable to perform key functions. But while Obama nominated seven people to fill those vacancies, according to a 2018 report from the Congressional Research Service, none received a vote in the Senate.

The opposition came from both sides of the aisle. Vermont Sen. Bernie Sanders placed a hold on two of the nominations, James Miller and Mickey Barnett, who had already been serving on the Board of Governors and had been selected to serve another term. Republicans placed holds on the nominees supported by Democratic leadership. Warren Gunnels, Sanders’ Staff Director, says Miller and Barnett were selected in consultation with Senate Majority Leader Mitch McConnell, and that Sanders opposed them because they wanted to privatize the postal service and he was trying to protect the workers.

“It is a total lie and a distortion of reality to assert that Bernie Sanders, one of the strongest defenders of the U.S. Postal Service in Congress, enabled Trump’s efforts to destroy the Postal Service. Along with the American Postal Workers Union, the AFL-CIO and the NAACP, Senator Sanders did everything he could to stop two extreme right-wing Republicans from being appointed to the Postal Service’s Board of Governors,” Gunnels said in a statement. “These two Republicans wanted to privatize the Postal Service, slash jobs and slow down mail delivery.”

McConnell’s office did not respond to requests for comment.

By 2016, the Board of Governors was down to one member, James Bilbray, whose term ended in December of that year. By the time Trump took office in January 2017, the Board was officially empty, offering him a unique opportunity that he quickly seized. Of the six members currently serving on the Board of Governors, four have donated to Republican candidates, including Trump, and have served as officials in prior Republican administrations or political organizations, according to TIME’s analysis of political contributions and financial disclosures.

The other two members, Ron Bloom—a former member of the Obama administration—and Donald Moak, are viewed as the Democratic members. (Williams was also viewed as a Democratic pick until his resignation). Bloom’s term though, ends in December of 2020, giving Trump yet another opportunity to nominate someone to the Board.

As a result of these nominations, all of which were confirmed by voice vote in the Senate, the USPS Board of Governors had a quorum and could resume its major responsibilities by August 2019. So when former Postmaster General Megan Brennan announced her intentions to retire in October of that year, the Board was in a position to elect her successor. In May, they picked DeJoy, the first person selected for that position who had not come up through the organization.

Questions still abound about how, exactly, the Board of Governors settled on DeJoy. Senate Minority Leader Chuck Schumer’s office has been probing the process, alleging that the Board withheld key information from Congress on the matter, including the administration’s involvement.

What’s clear though, is that DeJoy’s selection was the result of a series of decisions that predated the Trump administration.

“Clearly, if there had been holdovers with experience there might have been different outcomes,” says Art Sackler, who manages the Coalition for a 21st Century Postal Service, a mailing and shipping industry group. “Including on the hiring of the Postmaster General.” 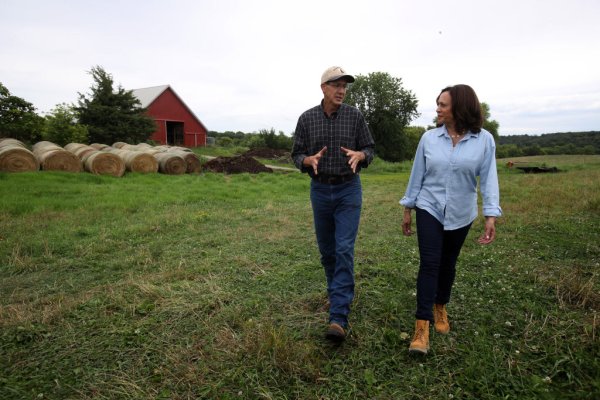 How Kamala Harris Became a Hawk on Climate
Next Up: Editor's Pick