‘Declaration of War’: Obama’s Brawl With Trump Breaks With History in a Big Way

There’s an unwritten rule in American politics that once you add an “ex” before your title of “President,” you pretty much bench yourself from the game unless a family member gets involved. That obviously doesn’t work for former President Barack Obama these days. Given his speech last night and posture heading into the fall campaign against his successor, it seems Obama has found the limits of hope but not in the power of change.

With language unheard of from a former President, Obama used his time addressing his Democratic Party’s virtual convention to cast Trump as lazy, incapable of doing the job or even taking it seriously. Instead, Obama said, Trump has shown “no interest in treating the presidency as anything but one more reality show that he can use to get the attention he craves.” His hopes that Trump would realize the responsibility on his shoulders came up empty, he said.

“Donald Trump hasn’t grown into the job because he can’t,” Obama said in a declaration that detonated decades of presidential detente.

As my former editors Nancy Gibbs and Michael Duffy observe in their history of ex-Presidents, it’s generally accepted that their fraternity is one that doesn’t squabble. As Gibbs and Duffy brand it in the title of their book, The Presidents Club is a chummy one. Exceptions can be made, as was the case when Bill Clinton boosted Hillary Rodham Clinton’s presidential ambitions or when both George H.W. Bush and George W. Bush came off the sidelines to help Jeb Bush’s fateful pursuit.

Otherwise, you hold your fire. George H.W. Bush chose not to speak when his own son won the Republican nomination in 2000 on a message that the elder Bush’s heir, Bill Clinton, was an adulterous scoundrel. Clinton didn’t mention George W. Bush once during his first post-White House trip to a convention in 2004. George W. Bush didn’t even attend the 2012 convention as Mitt Romney was trying to oust Bush’s successor, Obama. (Republicans weren’t exactly pining to have W. there, either, having not fully gotten past Bush’s misadventures in Iraq and Afghanistan.) All the while, Clinton in 2012 only went after Romney’s policy slidedeck, not his character.

Despite their political differences, America’s former Presidents are among the handful of men — yes, all men to this point — who know what it’s like to have the toughest job in the world. They typically give the incumbent some leeway, knowing that historians for the rest of time will be considering their successes, failures and errors. “The kind of five-alarm fire Obama sounded last night is unlike anything in the modern history of the club,” Gibbs tells me. “But then, Trump himself represents an unprecedented figure in the Oval Office, and has made it clear in any case that this is one club he has no interest in joining.”

Consider Obama’s own relationships with his predecessors. A quick search of my inbox from the Obama years finds more than 100 instances of “I inherited” or “we inherited” in official White House transcripts to explain the financial mess that lay in wait in 2009. I have memories of at least as many in Obama’s re-election speeches in 2012. Yet each time I wrote about the blame-game in my former role covering the White House for The Associated Press, I dropped a line to President Bush’s representative to ask for comment. Never once did the former President’s office in Dallas want to engage on-the-record.

Instead, Bush choked back any emotion and answered the call when Obama asked him and former President Bill Clinton to marshal resources to help rebuild Haiti. As Bush himself put it in his first speech after leaving office, “he deserves my silence.” That’s simply what ex-Presidents have always done: they stay apolitical and remain resources for their successors.

That is, until now. Gibbs rightly likened Obama’s speech last night to a “declaration of war.” Obama and Trump haven’t spoken on substance since Inauguration Day back in 2017. So contemptuous is the current Commander-in-Chief of his predecessor that he refuses to allow Obama’s portrait to be added to the gallery of former Presidents.

Trump demonstrates little regard for the others, either. When the country gathered to mourn former First Lady Barbara Bush, Trump skipped the event and dispatched current First Lady Melania Trump, who posed for a photo with the other Presidents Club members and spouses. When George H.W. Bush passed, the Bush patriarch insisted that the current President be included in the ceremonies, during which Trump greeted the Obamas but ignored the Clintons and Jimmy and Rosalynn Carter.

Michelle Obama — among the most beloved figures in politics who nonetheless wants nothing to do with it — signaled fire was coming in her own speech on Monday, saying Trump was “in over his head.” Two days later, her husband was visibly emotional and invested in a way that I haven’t seen outside of funerals or memorials during his presidency. It was approaching the level I saw during his major speech on race in early 2008, and in announcing the election-eve death of his grandmother. Obama has ice-water in his veins, his critics like to say, so every break from his Spock-like cool is notable.

Still, it’s also worth noting that a pandemic-era campaign may have limits on just how potent Obama’s power to turn out the vote for Biden may be. As we noted yesterday, Biden may be running into trouble with Black voters under the age of 30. Having the first Black elected President make the case may have more zing than any other factor, but there is only so much Obama might achieve via Zoom. If Beyonce and Jay Z couldn’t drive turnout numbers for Clinton in 2016 with a rally in Cleveland, what are the odds for an Obama Facetime now?

If nothing else, Trump can no longer claim to have the market cornered on breaking with tradition in Washington. A former President basically just called the current one an enemy of democracy. Tell me that’s not going to draw a second look. 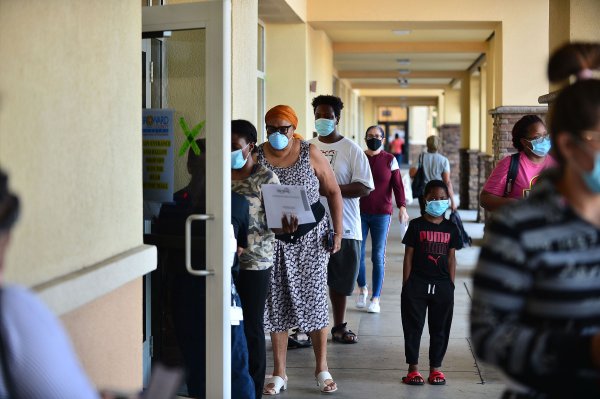 Black Voters Under 30 Could Decide Joe Biden’s Fate — By Sitting the Election Out
Next Up: Editor's Pick