John Sabraw painting in his studio, in Athens, Ohio in 2018.
Ben Siegel—Ohio University
By Arvind Dilawar

Sunday Creek begins around Corning, a small town in southeastern Ohio, before snaking down 27 miles to connect with the Hocking River. Like much of Appalachia, the creek’s watershed was historically home to communities of coal miners, but the mines have since closed, leaving only their runoff: nearly 1,000 gal. a minute of water so badly contaminated that Sunday Creek is now home to the worst acid mine drainage (AMD) site in the state. John Sabraw, an Ohio University professor of art who is also interested in sustainability, first noticed the effects of AMD when exploring the area with an environmentalist group in 2007.

“As we toured southeastern Ohio, I was struck by local streams that are not only devoid of aquatic life, but are orange, red and brown, as if from a mudslide upstream,” recalls Sabraw. From the environmentalists, he came to understand the source of the water’s discoloration. “The colors were mainly from iron oxide—the same raw material used to make many paint colors…I thought it would be fantastic to use this toxic flow to make paintings.”

Sabraw’s idea inspired not only a line of his paintings but also a collaborative effort between artists, researchers and community organizers to turn Sunday Creek’s AMD into paint pigments via an artistically inclined water-treatment facility breaking ground next year. Should the project prove to be a success, its backers at Rural Action, a regional nonprofit, are hoping to replicate it throughout Appalachia, turning the runoff from abandoned mines into art, jobs and clean water.

There are more than 23,000 abandoned mines across the U.S., according to records maintained by the Department of the Interior. The U.S. Environmental Protection Agency identifies these mines as the main regional source of AMD, a pollutant that contaminates drinking water, disrupts the growth of plants and animals, and corrodes infrastructure like bridges. While the federal government has been attempting to mitigate acid mine drainage since 1977 (by removing the sources of contamination, diverting polluted channels or allowing them to rewild, with funding from the Surface Mining Control and Reclamation Act), it remains a health and environmental hazard, especially in Appalachia.

“The three states with the highest number of abandoned mine lands and acid mine drainage sites on their state inventories are Pennsylvania, West Virginia and Kentucky,” says Michelle Shively of Rural Action. “The next three are Ohio, Virginia and Alabama.” (The Appalachian Regional Commission defines Appalachia as extending from southwestern New York to northeastern Mississippi along the Appalachian Mountains.)

Since 1999, Rural Action has been analyzing Sunday Creek’s water quality, installing remediation projects and leading educational tours of the area. The creek’s greatest AMD hazard is an abandoned underground coal mine in Millfield, Ohio, known as the Truetown Discharge. (The site was named after its former township, Truetown, which has since been incorporated into Millfield.) Mining at this and other such sites unearthed naturally occurring pyrite, which reacts with air and water to produce sulfuric acid and iron oxide. According to Shively, the Truetown Discharge now sends more than 1,000 tons of granular iron oxide into Sunday Creek each year.

Commercial ventures have harvested iron oxide from acid mine discharge before. When heated, iron oxide changes color, from yellow to red to purple, depending on the temperature. Nearly 240,000 tons of it is used in the U.S. each year, much of it imported from China, to produce oil and acrylic paints and to tint everything from cosmetics to concrete. Companies have traditionally pulled the iron oxide from bodies like Sunday Creek by diverting the flow into settling ponds, then evaporating the water. But that does nothing to detoxify the source stream.

Aerial view of the acid mine drainage near Oreton, Ohio in 2018.
Ben Siegel—Ohio University

Rural Action hopes to take a different approach with True Pigments, its water-treatment facility in Millfield, a town of fewer than 400 people through which Sunday Creek runs. Based on the research of another Ohio University professor—Guy Riefler, chair of the university’s civil-engineering department and a specialist on AMD treatment—Rural Action piloted a smaller facility farther up Sunday Creek at Corning, with a patent-pending process that takes in contaminated water, reduces its acidity, removes iron oxide and returns clean water to the source. The scaled-up facility at Millfield would produce 1,200 tons of iron oxide each year while simultaneously remediating seven miles of waterway.

True Pigments would address only a fraction of the U.S.’s iron oxide needs as well as its AMD-polluted streams, but Rural Action doesn’t plan on stopping there. It intends to channel profits from the operation’s iron oxide pigment sales—nearly $2 million a year, according to the group’s projections—into building other water-treatment facilities in the region. That reinvestment, says Brent Means, a hydrologist with the U.S. Department of the Interior, is “unique” and “really forward-thinking.” Rural Action’s plan would also reduce U.S. imports of iron oxide, thereby cutting carbon emissions as well as reducing demand for operations that mine or artificially synthesize paint pigment. The local benefits would extend beyond ecology to the economy, in an area with only eight other registered businesses.

“This project alone will double the annual payroll of the Millfield ZIP code,” says Shively.

Construction of True Pigments is set to begin in the spring of 2021, with its planned completion in 2022. Rural Action has already secured $3.5 million from the Ohio department of natural resources and is currently fundraising for the remaining $4.5 million in anticipated construction costs. With the funds from an anonymous gift, the organization has purchased all 48 acres necessary for the facility and its grounds. It is also finalizing a deal with Ohio University to license the AMD treatment process developed by Riefler.

Sabraw, who serves as a research consultant to True Pigments, was the inspiration for using the iron oxide produced by Riefler’s process to create paint pigment. The paintings he made with pigment harvested from Sunday Creek are circular compositions that simultaneously evoke alien planets and microscopic cells. Chroma S4 Chimaera, for example, could be a tie-dye Jupiter, while Chroma S4 Blue River resembles an azure fungal growth on rust. Taken together, the paintings suggest a relationship between the universal and the infinitesimal, an interconnectedness Sabraw says captures the significance of AMD.

“Everything is intertwined,” he says. “The streams these pigments come from connect to other streams, rivers and eventually the ocean. This might seem like a local issue, but it’s not—it’s a global issue.”

The original version of this story misstated the year during which John Sabraw first noticed the effects of AMD on the Sunday Creek. It was 2007, not 2003. 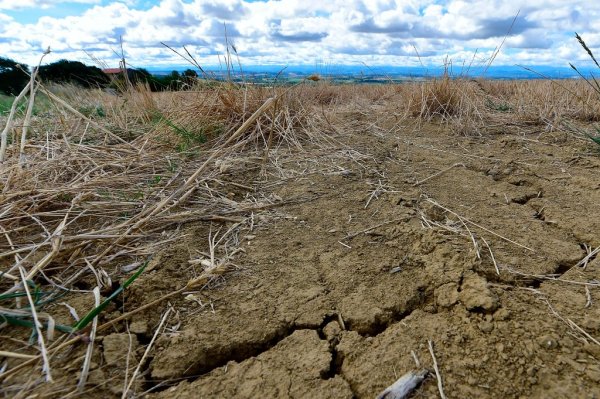 Annual Climate Change Deaths Could Top Infectious Disease By 2100
Next Up: Editor's Pick