The Best TikTok Dances of 2020 So Far

During this socially distanced and extremely online time, TikTok has emerged as the uncontested social media platform of the moment—and thus TikTok dance challenges, long the domain of Gen Z, have become omnipresent on the Internet at large.

The formula for creating one of these entertaining clips is deceptively simple: about 15 seconds of fast choreography (short and tight moves are preferred to fit the app’s vertical frame), set to a song’s catchiest snippet. Pair the right shimmies and gestures with an earworm of a music clip and you could find yourself being mimicked by millions of other TikTok users who are eager to learn a new dance routine—or just trying to get some movement in while staying home.

But the power of a trending dance extends beyond the views of a viral video; this year so far, TikTok dance challenges were responsible for securing top chart spots for artists like Drake, Doja Cat and Megan Thee Stallion, whose songs provided the addictive soundtracks for these dance trends. For Drake, no stranger to the potential of a viral challenge, having the “Toosie Slide” hit #1 on the Billboard Top 100 appeared to be a clever feat of reverse engineering, thanks to his instructive lyrics that were perfect for a soundbite, and the “leak” of a hip hop dancer-slash-influencer performing choreography to it. The dance challenge began before the song had even dropped.

Other artists have acknowledged the power of the TikTok dance as well; Doja Cat included Haley Sharpe, the TikTok user who created the viral choreography to her song “Say So,” in the official music video for the track, while Cardi B has vowed to learn the choreography to the dance challenge that choreographer Brian Esperon debuted on TikTok to her song “WAP” with Megan Thee Stallion. (Since the song released two weeks ago, “WAP” has been used as the audio for just under 200,000 videos on the app, while the hashtag #WAPdance has amassed over 2.7 million views.)

So, while the Trump Administration has issued executive orders that some fear could lead to the app getting banned in the United States, it appears that for now the TikTok dance challenge is here to stay. From the Renegade to the WAP challenge, here are the best TikTok dances of the year and how they took over the Internet.

The Renegade with “Lottery (Renegade)” by K Camp

Consider the Renegade the dance routine that introduced TikTok dances to the mainstream. The New York Times reported in February that the wildly popular version of the dance that was circulating on TikTok was taken, without credit, from a 14-year-old dancer named Jalaiah Harmon, who had posted the original and more complex routine on an app called Funimate. The dance’s viral popularity brought issues with crediting and influencer culture—especially when it comes to taking (and benefiting from) content made by Black creators—to the forefront of Internet discussion.

“Blinding Lights” by The Weeknd

The Weeknd’s ’80s-flavored hit “Blinding Lights” inspired TikTok user @gregdahl7 to create a challenge in its name, which involves a group of people dancing with sweeping arm movements. Unlike other TikTok challenges, this one tends to involve more space and movement, as it begins with a run into the frame and ends with a jump.

“WAP” by Cardi B and Megan Thee Stallion

While there are multiple dances that have been choreographed for Cardi B and Megan Thee Stallion’s late-summer hit “WAP,” the routine that begins with a high kick, twerking and falling into the splits—created by choreographer Brian Esperon—is the one that’s Cardi-approved and has found fans among influencers like Dance Moms star Nia Sioux.

“Tap In” by Saweetie

TikTok user Lesley Gonzalez is credited with creating the choreography for the “Tap In” dance, which begins with a literal interpretation of the song’s title. The dancer first “taps” the air like a phone screen, then launches into a series of flashy upper-body dance moves and body rolls.

“Say So” by Doja Cat

When 17-year-old Haley Sharpe created this quick routine filled with arm rolls and punches in her bathroom, she helped to catapult Doja Cat’s song “Say So” to both TikTok fame and the top of the charts. Sharpe’s influence didn’t go unacknowledged either; Doja had the teenager appear in the ’70s-themed official music video for the song, where Sharpe performed the routine while roller skating at a disco rink.

According to New York Magazine, the body roll-heavy dance routine that’s become synonymous with ppcocaine’s song “3 Musketeers” was created by TikTok user @colo.cag. The choreography is punctuated with lots of chest pops and hip thrusts, which makes it a great match for the energetic, if chipmunk-esque, vocals from ppcocaine (formerly known as trapbunniebubbles).

When Megan Thee Stallion dropped her EP SUGA in March, her song “Savage” became a hit on the Internet, where fans particularly loved the hook that described Meg as “classy, bougie, ratchet.” TikTok user Keara Wilson created a dance routine with demonstrative movements for each of those descriptors that was so captivating that Meg not only reposted Wilson’s video, but also uploaded a video of herself doing the choreography.

Kesha’s old music—party anthems ripe with hyperbole and debauchery—make for TikTok gold: since the dances that trend on the app do well with literal interpretations, the more dramatic the lyrics, the better. So perhaps it should come as no surprise that Kesha’s song “Cannibal” has become a viral hit on TikTok nearly a decade after its release. The routine created by user Briana Hantsch features a dance move of pretending to eat alongside the line “I’ll eat you up,” and became so popular online that Kesha herself released a video of herself doing the dance online, alongside TikTok super-influencer Charli D’Amelio.

Singer and burgeoning TikTok influencer Jason Derulo has made no secret of his love for the app, using it to boost the release of his song “Savage Love” in June and using TikTok videos of influencers and celebrities dancing to the track as the official music video. The release did came with some controversy, however; Derulo was called out for using Joshua Styla’s “siren jam” beat (which had found popularity on TikTok earlier) in a sneak-peek snippet, without crediting him or clearing its use. Styla, a Polynesian 17-year-old living in New Zealand, had created the beat to pay homage to his Samoan and Cook Island heritage; while Styla later received song credit, according to Variety, he was in the middle of label discussions and conversations about artists he might collaborate with (including Derulo), when Derulo leaked the song.

Do I Have Your Attention Challenge with “Attention” by Todrick Hall

This dance challenge is for the flexible among us; started by user Alejandro Santos, it consists of gymnastics-inspired moves, with many people hitting feats like kicks, splits and back handsprings to the high energy of Todrick Hall’s track “Attention.”

“Vibe (If I Back It Up)” by Cookiee Kawaii

As far as dance routines go, this might be one of easiest ones to hit TikTok. Users can basically freestyle “throwing it back” as they see fit, as long as movements coincide with the quirky sound effects (a whip crack and sea gulls squawking) in the Cookiee Kawaii track.

The “Supalonely” dance, created by user Zoi Lerma, is a study in telling a narrative through dance. Consisting of mostly sweeping upper-body moves, the choreography mimes actions like “drinking” and “thinking” to match BENEE’s lyrics about feeling, well, “super lonely.”

The “Get Loose” dance challenge was inspired by the TisaKorean music video for the song of the same name by Huncho Da Rockstar and KBlast. In the video, the artists stand in a triangle formation, stepping forward and back as they twirl one of their arms, before jumping in unison. According to Business Insider, the dance challenge on TikTok started after user Taydon Smith recreated the dance in a video on the app, staggering his movements with his friends.

The dance created to accompany a clip from King Critical’s song “Why Is Everything Chrome?” has become one of the most popular routines on the app, with even Justin and Hailey Bieber giving it a try. The moves are drawn fairly directly from the lyrics, relying on the interpolation of “Lean Wit It, Rock Wit It” along with some well-placed hip sways.

According to Oprah Magazine, the original “Ahi” challenge was created by TikTok user @elrodcontreras, who choreographed a simple routine in which users sway their hips and raise their hands to the beat of the song “Tra Tra” by Nfisis. A later challenge, called the “Tra Challenge 2” kept most of the same movements and the same music.

This TikTok dance, created by user Thaddeus William-Coates, is a riff on the Macarena, set to a remix of MC Hammer’s classic track, “U Can’t Touch This.” Simply align your Macarena movements to the beats that follow Hammer saying “can’t touch this,” before adding a drumming motion and the “woah” at the end. 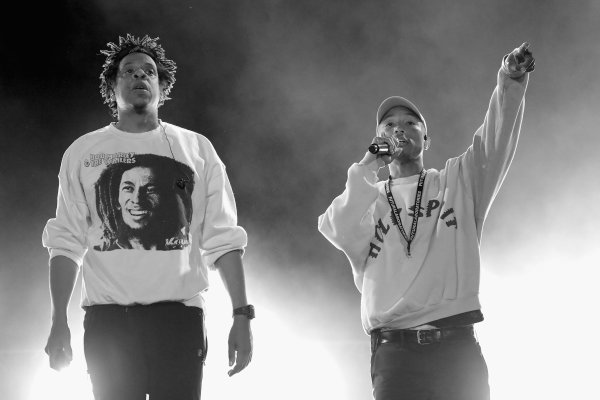 Pharrell and Jay-Z’s New Song ‘Entrepreneur’ Is a Celebration of Black Ambition
Next Up: Editor's Pick