Digital Democratic Convention Kicks Off With Message of Unity and Empathy

Nobody had ever seen anything like this Democratic Convention before. There was no schmoozing, which everyone knows is the whole point of a Convention. Democratic Conventions don’t typically feature Maggie Rogers playing “Back in my Body” wearing a flowing white nap dress on a rocky Maine beach, or videoconference roundtables with doctors and nurses. Desperate Housewives star Eva Longoria hosted the evening like Lesley Stahl, pivoting seamlessly between speeches, montages, and roundtables as if it were an unusually patriotic episode of 60 Minutes.

But if the digital dimension added a newfangled feel, the themes were decidedly old-fashioned. The first night of the Convention was all about what former Vice President Biden has talked about since the beginning of his political career: unity, empathy, and how neither can exist without the other. Ideology — and really, political distinctions of any kind — took a backseat to character.

Personal stories were in the foreground. The first night of the Convention featured COVID-19 frontline workers, Amtrak conductors who had befriended Biden on his long commutes to and from Delaware, and the families of Eric Garner and George Floyd. One young woman named Kristin Urquiza, who had lost her Trump-supporting father to coronavirus, delivered one of the most blistering lines of the night. “His only pre-existing condition was trusting Donald Trump,” she said. “And for that, he paid with his life.”

All Conventions aim to build coalitions, but this DNC has an even bigger goal: to unite the country, not just the party. National unity, part of what Biden calls the “battle for the soul of the nation,” has been central to the nominee’s campaign. The Convention programming also drove home the message that Biden’s personal empathy, his ability to build relationships with everyone from Republicans to Amtrak conductors to the families of Black men killed by police, is the reason he may be uniquely capable of delivering on that promise.

“I’m a lifelong Republican,” Kasich said. “But that attachment holds second place to my responsibility to my country.”

Kasich went on to make a pitch to his fellow conservatives, arguing that Biden is a decent man who respects political differences and won’t be pulled to the far left. “I’m sure there are Republicans and Independents who couldn’t imagine crossing over to support a Democrat. They fear Joe may turn sharp left, and leave them behind,” he said. “I don’t believe that. Because I know the measure of the man: it’s reasonable, faithful, respectful. And you know, no one pushes Joe around.”

“My friends,” he said. “The price of failure is just too great to imagine.”

Kasich was pitching to the right and Sanders was pitching to the left, but the night ended with Michelle Obama articulating the common message: that Donald Trump is an unfit President, and that Biden’s personal empathy make him uniquely capable of healing a nation that has been wrecked by trauma.

Sitting in a living room, wearing a necklace that said “Vote,” the former First Lady delivered one of the most intimate and compelling political speeches in modern memory.

“Right now, kids in this country are seeing what happens when we stop requiring empathy of one another,” she said. “They’re looking around wondering if we’ve been lying to them this whole time about who we are and what we truly value.” Refusing to wear a mask, calling the police on Black people living their lives, emboldening white supremacists, and separating children from their families all amount to what the First Lady called “a nation that’s underperforming not simply on matters of policy but on matters of character.”

Biden’s experience of personal loss, Obama said, gave him an understanding of ordinary people’s struggles. “When he was a kid, Joe’s father lost his job. When he was a young senator, Joe lost his wife and his baby daughter. And when he was vice president, he lost his beloved son,” she said. “His life is a testament to getting back up, and he is going to channel that same grit and passion to pick us all up, to help us heal and guide us forward.”

Obama then took the unusual step of urging people not just to request a mail-in ballot, but to prepare to vote in person, even during a pandemic, in order to ensure Biden’s victory. She encouraged voters to put on comfortable shoes and masks, pack a lunch (or even breakfast) and “stand in line all night if we have to.”

Because, she said, the stakes could not be higher. “If you take one thing from my words tonight, it is this: if you think things cannot possibly get worse, trust me, they can; and they will if we don’t make a change in this election,” she said. “If we have any hope of ending this chaos, we have got to vote for Joe Biden like our lives depend on it.” 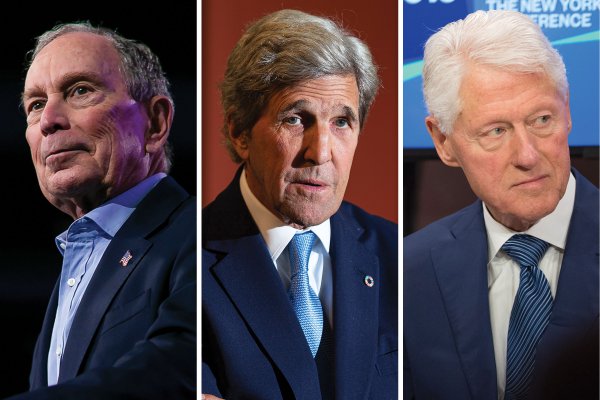 DNC Is a Blast From the Past
Next Up: Editor's Pick