We’re only a few hours away from the first virtual political convention being gaveled into session and it’s already clear things are going to be very, very different.

For one, the journalists who normally crowd the convention hall for the big moments are going to be dialed in from their kitchen counters and living room couches like other Americans still stuck at home in the middle of the pandemic. There won’t be rogue delegates to interview or random chants from the floor to cause embarrassing, off-brand moments. There may still be surprises, but they’re likely to be the kind that have been scripted and executed by the conventions’ producers.

For veterans of past conventions, the all-remote set-up is just the latest hiccup in this year’s election season as the world grapples with coronavirus. Both parties have almost entirely switched to streaming schedules and cut way back on the hours of floor programming. The Democrats’ convention starts tonight, followed by Republicans’ show this time next week. News organizations will still treat the evenings as the political ground zero that they are, but there’s just a lot less sizzle in the offing as the very campaign trail has turned into a very long Facetime. There may be some upside to cutting back on the hours and hours of speeches: a quicker and less inefficient night of political preening.

Ahead of the conventions’ start, I caught up with NBC News’ Lester Holt, the first Black man to be a U.S. network newscast’s solo anchor. He will be leading the network’s coverage of the conventions during 10 p.m. hour. With ratings up for flagship news broadcasts across the networks, we talked about how he’s been framing the colliding stories of a pandemic, racial justice, and a presidential campaign that politicizes everything, including masks. For the next two weeks, Holt will be reporting from NBC’s Midtown Manhattan studios — a spot he’s only seen a handful of times since March. Our conversation has been edited for concision and clarity.

You’re about to anchor a global event while not there. What is that like?

Well, it’s particularly strange for me, because one of the hallmarks at Nightly News is that I like to take viewers to the story. I want to talk to people. I want to bring a personal connection to the story. And, of course, we have lost that ability on a lot of the things we cover. Part of conventions are the conversations in the hallway, it’s the people you run into. You pick up little nuggets along the way. This is going to be very different watching in a studio people who may be giving speeches from their living rooms or their kitchens.

This is kind of terrible on a personal level, isn’t it?

Oh, sure. It is. It’s just one thing that we took for granted that’s been taken from us. From a personal level, I had a lot of expectations this summer. I was going to be covering the Olympics. I was going to be covering these two conventions, traveling to wherever the debates are. None of those things are happening, but the process of electing a President goes on. Like so many Americans and so many businesses, we’re figuring it out as we go along.

This year has been a rough one for our business. You mentioned the Olympics, which is an NBC institution. That’s off the table for the moment. We’ve got no conventions, no campaign road warriors. How do we as an industry make it through this while also continuing to do exceptional journalism?

The candidates simply aren’t traveling. I mean, the President has been traveling some and within the White House bubble. We’ve had some access in Delaware to Joe Biden, but you’re right. We’re not able to cover things the way we used to. Thank God for Zoom and some of the other technologies we’ve been able to employ. But I’m not going to lie: It’s hard to replace that one-on-one contact, that ability to cultivate sources and just listen to people and voters and decision-makers about what’s happening.

Your audience is used to a visual medium. We’re going from balloon drops and pandemonium to what is basically a Zoom happy hour. How do you get your audience ready for that?

The speeches will be the speeches. But at least with the Democrats, you’re not going to hear a crowd roaring its approval or reacting in any way. I guess in this aspect, we’re going to be really focused on the words themselves, because the performance art that is part of conventions, that part is going to be missing. The imagery is so different. You mentioned a hall with balloons dropping. We’re going to see somebody’s toaster in the background.

Might we actually be getting to a point where we’re looking at the ideas instead of pageantry?

I think so. Look at the four years ago. “Lock her up” became a mantra for some of candidate Trump’s supporters of that time. Those moments, we probably won’t see. And so we’re going to be forced to focus on the messages, the timing, the words as opposed to how the crowd reacts or those surprise moments in the crowd or the demonstrations. I would argue that we’re not going to have as many distractions that we might otherwise have.

If this whole thing is scripted from the start, why bother with it?

They bother because they know that they’re going to get the television coverage. You and I are old enough to remember the days when it was wall-to-wall convention coverage on the networks. That’s not happening anymore. But it’s still valuable real estate on network television. So I can’t imagine either candidate even considering for a moment not doing a televised convention. It’s still part of the process.

Where will you be physically sitting during this?

I’ll be in Studio 1A, The Today Show studio, with Savannah Guthrie. Of course, we’ll be physically distanced. Andrea Mitchell and Chuck Todd will be in a studio in Washington, D.C., so four of us will navigate through the evenings.

On the personal side, being able to go to the studio, and sit next to Savannah is a huge upgrade. I’ve been sitting in a spare bedroom for the last several months doing Nightly News by myself every night. It’s been a lonely existence. I’m not complaining. Obviously, there are a lot of people going through tough times. But the ability to come back to 30 Rock and sit in the studio is something that I’m personally excited about.

Have you embraced what the rest of us have during this: a suit, tie and athleisure below the desk?

I’ll be honest. I’m usually wearing jeans, but I gladly put on that jacket and shirt and tie. Now, having said that, I have gone out to do interviews for Nightly News pieces and Dateline. So I’m not inside all the time. But in terms of anchoring, it’s primarily been from a home.

We’re in the middle of three major stories converging at once, and the story on race has been one where you’ve been pretty frank. Do you have a platform that perhaps Norah O’Donnell and David Muir don’t?

People look at me. They expect me to have an opinion or to be affected by these things. That doesn’t necessarily show a bias but it’s a recognition of who I am as a person. People come to this broadcast presumably because they trust me and they respect me. If I didn’t say anything, I think it would be disappointing. Now, I choose my words carefully. But I don’t think it’s a bias to want this country to live up to its ideals, that it’s a bias for this country to be fair, that it’s a bias for people to want their police to function in service of people.

This might be the biggest story of our career. The whole mantra is journalism is a first draft of history. You have a say in what goes in the history book. What makes the cut?

I wrote the intro to the broadcast last night. We’d just come off another weekend of huge crowds of people, openly defying local and the state regulations. This didn’t air, but it was something to the effect that when the history is written of why this country failed in dealing with this pandemic, volumes will be spent on our inability to do the simple things like wearing a mask and socially distancing. That’s a paraphrase, but it’s pretty close. I think it’s appropriate sometimes to call it like it is.

This is an important time for journalism. This is an important story. And when it landed at our doorstep, I thought, ‘Alright, you know, we’ve taken three and a half years of a beating, of people trying to discredit us, but this is a story that everyone has to pay attention to, that people will recognize the importance of a free press.’ That happened, but then the politics creeped back into it. I guess I was a little naïve. I didn’t expect that.

I thought that this could be seen for what it was: a health threat that we all shared. Instead, suddenly it became seen through the lens of blue and red again. That was crushingly disappointing. It worries me about our future that even something like this has been marred by politics.

Can we purge the politics from it, or is it too late?

I think it’s too late. Most people get what it takes to fight this disease. They understand masks and social distancing. This has become almost the new global warming. The planet is getting warmer. That’s not a political statement, but it is for some people. COVID is spreading because too many people are crowding together. It’s not a political statement, but some people will see it as such.

How dare you embrace science and fact?

The thing is as journalists, we obviously have to report the body of science on this, which is huge in the direction of social distancing and get that mask wearing. We don’t want to be caught up in a political debate. I don’t want people to think I’m being political when I say we should all be wearing masks. Unfortunately, that’s what the environment has kind of led us down the road to. 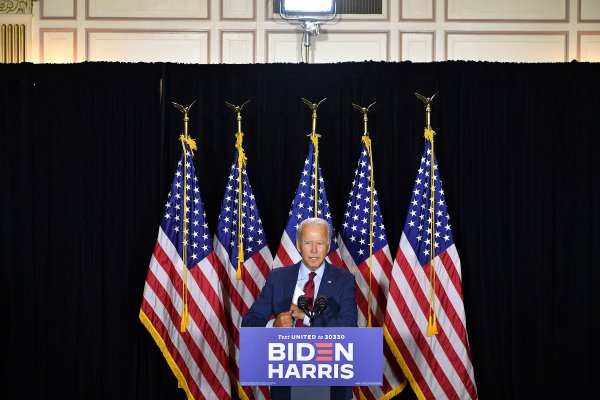 Democrats Set to Nominate Middle-of-the-Road Biden
Next Up: Editor's Pick