It Turns Out Progressive Twitter Isn’t Real Life. Democrats Set to Nominate Middle-of-the-Road Biden After All

Democratic presidential nominee, former US Vice President Joe Biden, speaks to the press after receiving a briefing on COVID-19 in Wilmington, Delaware, on Aug. 13, 2020.
Mandel Ngan—AFP/Getty Images
By Philip Elliott

As Democrats prepare for their nominating convention next week via Zoom, a most unexpected reality is confronting the party: delegates are about to nominate a card-carrying moderate member of the political Establishment. Wall Street is fine with his running mate and activists’ dreams of a hyper-liberal course for the party are now relegated to a platform that a President Joe Biden would be free to immediately toss aside. It’s hardly the revolutionary ticket some were chasing in the wake of Hillary Clinton’s loss four years ago.

Back then, many in the Democratic Party’s elite asserted that the party’s fatal flaw that election cycle had been sticking with the Establishment-minded Clinton over the self-described democratic socialist Bernie Sanders. The party went with the mainstream and lost the White House to a man who had never run for anything. The soul-searching among Democrats kept coming back to a thesis that included turning to more progressive ideas and bolder government programs. In 2017, Sanders himself said that the party needed to stop flirting with incrementalism and dive head-first into his dogma with candidates. (That same cycle, however, his slate of candidates fell short in Virginia’s primary races and centrist Democrats took control of state government.)

Not everyone in the party was sold on this vision, which was so widely repeated that it seemed to take on an ideology of its own. One Washington insider said Democrats should hit pause, read the polls, and listen to what voters actually want. Quietly, Jonathan Cowan, a former aide to Mario Cuomo during the Clinton Administration, assembled a network of about 500 like-minded party insiders and lobbied the Democratic National Committee to eliminate 13 states’ caucuses that, due to their complicated processes and time-sucking hurdles, favored populists like Sanders. Instead, the party used primaries that drew wider and more-lowercase-d democratic participation.

It was not, to put it nicely, a welcomed idea in the opinionated corner of Progressive Twitter. Cowan, from his perch in an office building a five-minute walk from the White House, kept rejecting the assumptions that the party’s base was ready for a wholesale shift from capitalism or a punitive posture toward Big Business. He persuaded the corporate supporters of his 15-year-old Third Way think tank to pony up for surveys and focus groups to better understand the electorate. To the 55-year-old Ohio native, stopping a slide toward Sanders’ vision of the party was mandatory if Democrats stood even a remote shot at winning votes back home. His was a campaign for the fierce power of centrism.

Cowan and Company’s understanding of Democrats’ and the electorate’s real inclinations have been proven right — twice. Voters don’t want a revolution, they want reformation. They want health insurers to work better, not die. They want banks to be fair, not implode. In 2018, Democrats won back their majority in the House by ousting incumbent Republicans with middle-of-the-road Democrats. Sure, progressives’ efforts moved some solidly Democratic districts further to the Left, as was the case when Alexandria Ocasio-Cortez defeated a potential Speaker-in-Waiting. But the net pick-ups that year were in places like the D.C. suburbs, Detroit’s bedroom communities and even Oklahoma City, where candidates largely rejected Sanders’ brand. Two years later, Democrats desperate to make Donald Trump a one-term President opted for the safety offered in Biden and explicitly rejected Sanders.

Over the last three years, Cowan and I have talked about this dynamic a lot. When we caught up in Columbus, Ohio, in the run-up to the 2018 elections, he was bullish on Democrats’ chances based on the House nominees’ careful rejection of “Sanders-style socialism.” A year later, when we had a drink on the sidelines of a conference in Charleston, S.C., he was again preaching that Democrats would come to their senses in 2020 and go home to a mainstream Democrat. And by Super Tuesday, as we sat down in a conference room in Washington, he would have been excused for ordering bubbly from the liquor store downstairs as Sanders was boxed out of the nomination.

These days, Cowan isn’t one to crow, and a victory lap at this point would only provoke Sanders’ stans who have made Cowan into their own boogeyman. Sanders himself regularly name-checked Cowan during speeches, debates and in fundraising messages as a corporate shill, representative of everything wrong with campaign finance. “It is less about having called this right and much more about the fact that it has positioned us not just to get the House, but to have a serious shot at getting the Senate back and to ousting Donald Trump,” he said last week during a phone call.

Still, given the polling that shows Trump trailing Biden and Democratic enthusiasm climbing ahead of the virtual convention, it wouldn’t be a stretch to imagine what Cowan’s fridge will look like in early November. 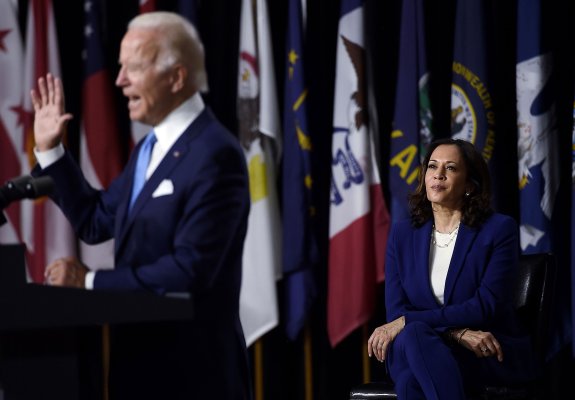 Harris’ First Biden Event Shows How Politics Has Changed
Next Up: Editor's Pick