#PolishStonewall: LGBTQ Activists Are Rallying Together After Police Violence at Protests in Warsaw

People take part in a protest against the detention of an LGBTQ activist, Margot, in Warsaw, Poland.
Rafal Milach—Magnum Photos
By Madeline Roache and Suyin Haynes

As LGBTQ activist Malgorzata Szutowicz, sits in solitary confinement for a fourth day in the city of Plock, central Poland, hundreds of people across the country are protesting in her name. On Friday, Margo, as she is more commonly known, was placed in pre-trial detention for two months, on charges of assaulting a driver of a truck that displayed an anti-LGBT banner.

The same day, hundreds of people gathered in the capital, Warsaw, to defend her freedom. In doing so, they were risking their own: 48 protestors were detained and many more injured in what experts say was an unprecedented level of police aggression against an LGBTQ demonstration, particularly in a European Union member state.

By Saturday, thousands had gathered in Warsaw to denounce Margo’s arrest and police aggression against LGBTQ people. And although Poland is experiencing a rise in new cases of COVID-19, at least 15 solidarity protests, both big and small, took place on Monday in towns and cities across the Poland, as well as in Budapest and London, New York, Paris and Berlin, with more planned.

While not all activists may agree with Margo’s methods, her prosecution and imprisonment has been widely condemned. “These radical actions are a part of history that has happened in many other countries before,” says Julia Maciocha, chairwoman at the Warsaw-based LGBTQ organization Volunteers of Equality Foundation. In a nod to the Stonewall Uprising of 1969 in New York City, several users on Twitter started posting #PolishStonewall in tweets about the weekend’s events and subsequent solidarity protests.

The weekend protests come amid intensifying anti-LGBTQ rhetoric by government officials and state media after the recent re-election of President Andrzej Duda. On Aug. 6, the anti-E.U. populist leader was sworn in for a second five-year term as president on a strong anti-LGBTQ platform, branding LGBTQ rights an “ideology” worse than communism and proposing a “Family Charter,” including a vow to block legislation allowing gay couples to get married or adopt children. The charter also included a ban on “the propogation of LGBTQ ideology in schools and public institutions,” reminiscent of Russia’s notorious ‘gay propaganda law’ in 2013. Such moves pave the way for “verbal and physical attacks against” the LGBTQ community, says Hanna-Gill Piatek, a lawmaker from a pro-E.U. political party, Spring. Adam Bodnar, the Polish Human Rights Commissioner, agrees, saying that “to a great extent, LGBT persons are becoming victims of political life.”

For over a year, the government and religious leaders have used LGBTQ people as a “scapegoat,” says Mirosława Makuchowska, vice diretor of the Warsaw-based Campaign Against Homophobia. The Duda-allied Law and Justice party (PiS), which has led Poland since 2015, has consistently railed against the LGBTQ community, presenting its members as a threat to family values. (Anti-LGBTQ attacks are not considered a hate crime by law in Poland.)

The church in Poland also wields enormous influence over education, law and politics, and about 86% of the population identify as Roman Catholic. Marek Jedraszewski, an archbishop, warned last year that a “rainbow plague” seeks to “control” the population. Since 2019, authorities in one-third of cities across Poland have adopted resolutions declaring themselves “LGBTQ ideology free zones.” In late July, the European Union announced it would not provide funding to six Polish towns that made this declaration.

What sparked the protests?

On July 14, Margo, who is a member of the LBTQ activist group Stop Bzdurom (Stop Bullshit), was arrested in Warsaw and accused of assaulting the driver of a truck promoting anti-LGBT propaganda and blaring slurs from loudspeakers, as well as of damaging the vehicle on June 27. She was detained overnight and released.

On Aug. 3, police again arrested Margo, along with other activists, for taking part in a campaign that covered monuments in Warsaw with rainbow flags. Authorities accused them of “insulting religious feelings and insulting Warsaw monuments.”

Four days later, on Friday, a court ordered Margo to be placed in pre-trial detention for two months. When the court order came through, she was seeking legal counsel at the headquarters of a local organization, Campaign Against Homophobia. Although Margo gave herself up to the police, they did not arrest her. From the campaign headquarters, Margo and other activists and protesters then headed to Krakowskie Przedmieście, one of the central streets in Warsaw, where the Monument of Christ had been covered with a rainbow flag a week earlier, in response to the E.U.’s announcement that it was blocking funds to the six Polish towns that declared themselves “LGBT-free zones.”

Witnesses say that police officers in an unmarked police car then detained Margo with excessive use of force. “This was the last straw,” says LGBTQ rights activist Zośka Marcinek, who tried to prevent the car from leaving the scene. “Not only the charges and arrest were farcical, not only it was obvious Margo is being targeted as a nonbinary/transgender person, it was also cowardly and brutal,” she says.

What happened at the protests?

Hundreds of protesters were gathered at Krakowskie Przedmieście when Margo was detained at the scene. What started as a peaceful, spontaneous protest soon escalated into violence, as police started removing people violently from the site. Protesters—some just walking by or standing on the side-walk—were pushed against walls and thrown to the ground by police, activists say. Police made a lot of “mistakes” says Bodnar, whose team was able to access the 33 out of the 48 detained protestors on Saturday when all other visitors were barred. Bodnar says some people were wrongly detained—“one person was just observing the protests, another was on a shopping trip.”

Marcinek tells TIME that a uniformed policeman tripped her over, causing her to hit the back of her head on the pavement, before an officer then held her in a chokehold. She was arrested and taken into custody, and says police taunted her with homophobic slurs. Despite suffering from a concussion, she says she was denied medical assistance for around eight hours. Makuchowska, the head of the Warsaw-based Stop Homophobia Campaign, says police pushed her to the ground, leaving her with a bruised back.

On Twitter, Warsaw’s police force said 48 people were detained in connection with insulting a policeman and damage to a police car, and that the police had called for “legal behavior” during the protests. A report by the Polish Commissioner found that many people were interrogated at night with no access to legal aid, food or drink and that several detainees had visible body injuries as a result of police brutality. Piatek says that police blocked lawyers from contacting some detainees for hours. Several left-wing politicians, who intervened at the police stations, were also denied the right to information, she says.

Bodnar says that he wouldn’t compare this situation with previous LGBTQ demonstrations, which were planned Pride events and marches. But he notes an “unequal approach by the police,” referring to the lack of police response to marches led by nationalist groups—even when such marches could be seen as promoting aggression, like burning an LGBTQ flag. In his view, the police’s reaction to demonstrations depends on whether a certain group is “liked by the authorities or not.”

The Nicolaus Copernicus monument is decorated with a rainbow flag.
Rafal Milach—Magnum Photos

Now, Poland’s LGBTQ community is bracing itself for what’s next. While those detained over the weekend have now been released from custody, activists say many of them will likely end up in court on charges of illegal gathering. In Polish law, this is defined as a riot in which participants jointly commit a violent assault on a person or property — a provision “only used when a crowd is calling for violent actions,” says Bodnar. But the weekend’s events “were not like this,” he says.

Nevertheless, he—like many others—is finding hope in the solidarity the LGBTQ community has received after the weekend’s protests. What made these protests “different” and “impressive,” he says, was the way politicians and lawyers rallied in support. At least eight politicians were present at police stations where protestors were detained, he says, while lawyers volunteered to defend them. “Polish authorities didn’t predict that putting Margo in detention would cause such powerful protests by the LGBTQ community and that those protests would be supported by opposition politicians and pro bono lawyers,” Bodnar says.

But what happens next for Margo remains uncertain and she is still waiting to access a lawyer while in solitary confinement. On the outside, Marcinek, the protester, tells TIME that policemen are randomly visiting and searching the homes of others who had been detained during the protests without warning or justification. And the broader future for LGBTQ rights in Poland is unclear. “Living in Poland, you can’t predict the future,” says Maciocha, head of the Volunteers of Equality Foundation.

What activists want now is stronger international solidarity, particularly from European governments. Remy Bonny, a Brussels-based LGBTQ rights activist and researcher who focuses on Central and Eastern Europe, says “we have seen this kind of violence in Russia and Belarus, for example, but not in an E.U. country.” The European Commission should condemn police violence in Poland in the same way it recently denounced the repression of protests in Belarus, he says. Makuchowska says she and other activists are calling on the international community to “help us to immediately release Margo.”

Despite the recent political campaign against LGBTQ people, activists say they feel that support for this community is growing and that more people who were once silent on LGBTQ rights issues are now compelled to speak out on social media or attend solidarity protests. “The community feels stronger in the end,” Makuchowska says. “We are determined to protect ourselves. The feeling is that we are strong.” 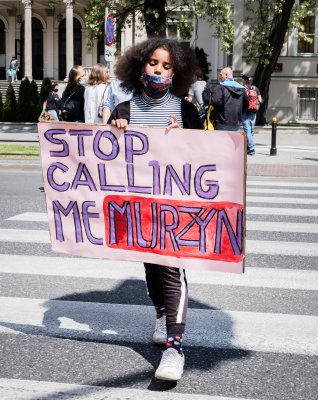 #DontCallMeMurzyn: Black Women in Poland Are Powering the Campaign Against a Racial Slur
Next Up: Editor's Pick