'It Smells Like Despair.' A Diary of Life Inside Beirut After a Deadly Explosion

After a powerful blast on Aug. 4 killed more than 200 people in Beirut and left 300,000 homeless, Gaëlle Moutran did what many young people in Beirut felt compelled to do in the ensuing days: film what was happening around her. With her iPhone, Moutran, a scenographer working in film and art, documents a city suffering from a pandemic, an economic crisis and a government in upheaval.

“It smells like dust, it smells like despair,” the 30-year-old tells TIME, showing where her apartment’s windows had been shattered by the explosion. The devastation was caused when 2750 metric tons of ammonium nitrate stored unsafely in a port warehouse detonated.

Armed with a helmet, a tear gas mask around her neck, and phone in hand, Moutran films an evening of violent demonstrations as protesters filled Beirut’s Martyrs’ Square, denouncing the corruption and chronic mismanagement of the political elite. Protests began in October 2019 and the political crisis has deepened since the explosion. “From the first second we got there, the energy was rage,” she says.

Read More: Explosion in Beirut: Photos From a City Still Reeling From the Blast

In response to that outrage, Lebanese Prime Minister Hassan Diab—who only assumed office in December—announced his cabinet’s resignation Monday. That didn’t eased protests, with protesters continuing to clash with police in central Beirut for a third consecutive night.

Moutran walks the streets of Beirut to help out with recovery and clean up efforts, joining NGOs and volunteers working tirelessly to rebuild the city. She stops at times to see what is left of her city, including her therapist’s office and some of her favorite streets. When she drives around the city at night, she notices an unusual sound for a city known for its lively nightlife: silence. “Beirut is always busy, but that night you could feel the emptiness. It was like someone had turned off the flame of a candle.” 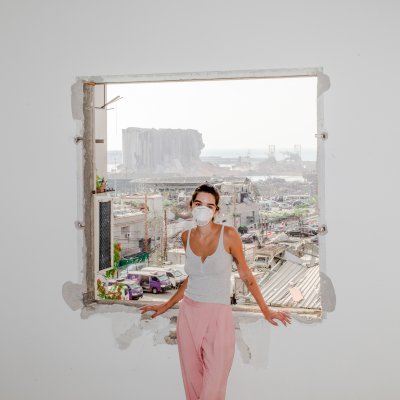