'Hiroshima' Has Become Shorthand for the Atomic Bombings. Here's Why We Shouldn't Overlook Nagasaki

It has been 75 years since the United States dropped atomic bombs on Hiroshima and Nagasaki on Aug. 6 and 9, 1945. And yet, in Japan, the United States and elsewhere—even as the story of the bombings has been revisited and retold countless times—so little is known about Nagasaki. “Hiroshima” has become shorthand for the historical experience of both cities, eclipsing the unique story of Nagasaki’s rise from the ashes. Moreover, “Hiroshima” has muffled the voices of the Nagasaki hibakusha (“the bombed,” the term for atomic-bombing survivors), who have struggled for more than seven decades to gain equal attention for the trauma and aftermath of their bombing.

Now, three-quarters of a century later, the consequences of that overshadowing are clear. The different approaches to atomic commemoration taken by officials in each city has contributed to the rise of “Hiroshima” and impeded the memory work of the Nagasaki hibakusha to distinguish their experience as separate. Authorities in Hiroshima quickly rebuilt the city as a site of atomic trauma and peace activism, while their counterparts in Nagasaki downplayed the atomic bombing to instead promote the city as a site of historical cosmopolitanism.

Early reconstruction plans in Nagasaki explicitly set out to make the bombing a secondary characteristic of the city’s identity, much to the consternation of the hibakusha. Municipal officials (many of whom had also survived the bombing) chose instead to emphasize the city’s earlier historical legacy as a center of international trade and culture. From the early-17th through the mid-19th centuries, Nagasaki served as the only port in Japan open to the outside world, specifically with China and the Dutch East India Company. In the late 1800s, the city became a major hub of shipbuilding and trade with the West. A community of Catholics who had secretly kept their faith alive since the early 17th century, known in the West as the hidden Christians, resurfaced and became a key component of the city’s international flare. After the bombing, city planners drew on this history to market Nagasaki as an “international cultural city” first, and only second as an atomic-bombed city.

As a result, city governance did not always support the work of hibakusha activist groups. In 1958, years after Hiroshima had become the symbol of a worldwide peace movement, Nagasaki officials permitted its Catholic community to remove the last physical remains of the bombing—the ruins of their cathedral—against strong opposition by the city’s activists. The ruins had stood as the primary site of memory in Nagasaki and the closest equivalent to Hiroshima’s famous Atomic Dome. But city officials, led this time by Mayor Tsutomu Tagawa, saw no reason to preserve them. After all, Hiroshima was already the driving force of the peace movement, and the colossal ruins impeded the mayor’s plans to tidy up the urban landscape and make Nagasaki a “modern” international city.

The internal politics surrounding the cathedral ruins were lost to much of the Japanese public, who dismissed the entire city and its activists as careless with their atomic legacy. A saying that can be heard even today emerged within this context: “Hiroshima Rages, Nagasaki Prays.” These words captured how a popular misunderstanding of local history and social politics led to a solidification of Hiroshima as the representative city. It also reflected the persistence of a Catholic-centered narrative of the bombing, which distinguished Nagasaki from Hiroshima early on.

The epicenter of the bombing and site of the worst destruction, the Urakami district in the north of the city was, at the time of the bombing, home to the largest Japanese Catholic community since Jesuit missionaries propagated Christianity in the 16th and 17th centuries. When journalists, municipal officials and others in and outside the city framed the bombing as an Urakami tragedy, not a Nagasaki one, they thereby created a Christian image of ground zero.

At the same time, the Catholic community found religious significance in the destruction. A prominent survivor named Takashi Nagai declared that God had chosen his community as a sacrificial lamb to end the war. His interpretation reached a large audience through his many books published during the American Occupation of Japan, which lasted from the end of the war through 1952. Despite the Occupation’s censorship policies regarding the bombings, American leadership supported Nagai because his interpretation justified the bombing, and because his books, full of Christian teachings, complemented democratization policies. Nagai’s call for grace and reconciliation became the loudest voice from Nagasaki in the early, formative years of memory after the war, standing in stark contrast to the industry of atomic trauma and rage that quickly emerged in Hiroshima.

Nagasaki hibakusha have always faced an uphill battle against the Hiroshima-centric discourse on the bombings, the persistence of the Christian interpretation of its experience and municipal aspirations for an urban identity that prioritizes a romanticized premodern history over the commemoration of a trauma whose survivors still live. Even so, survivors have tirelessly engaged in memory work that relates their personal accounts and social struggles, relying on the publication of a variety of literary forms including poetry, prose and testimony. Hibakusha in both cities have conducted memory-activism, often working in tandem—but whereas in Hiroshima they are given a clear voice, in Nagasaki they are not.

Some survivors also speak publicly, including at Nagasaki’s annual commemoration ceremony every August. The event has provided a precious moment for the hibakusha to promote their peace activism by describing the horror of the atomic bombing and the danger of nuclear weapons, as well as by criticizing Japan’s conservative government. Several hibakusha speakers in the 2010s, such as Sumiteru Taniguchi, condemned Prime Minister Shinzo Abe’s administration for attempting to remilitarize Japan. Nagasaki officials, who have not always supported the activists, responded by creating a committee of “specialists” to choose the ceremony’s hibakusha speaker. This was ostensibly to broaden the pool of speakers, but activists have seen it as an attempt to silence their critical voices.

Seventy-five years after the atomic bombings—when so few of the hibakusha remain—is surely long enough to have waited to turn our attention, finally, to Nagasaki and build a corrective to a discourse that has so far failed to see past “Hiroshima.”

Chad R. Diehl, an assistant professor of history at the University of Virginia, is the author of Resurrecting Nagasaki: Reconstruction and the Formation of Atomic Narratives 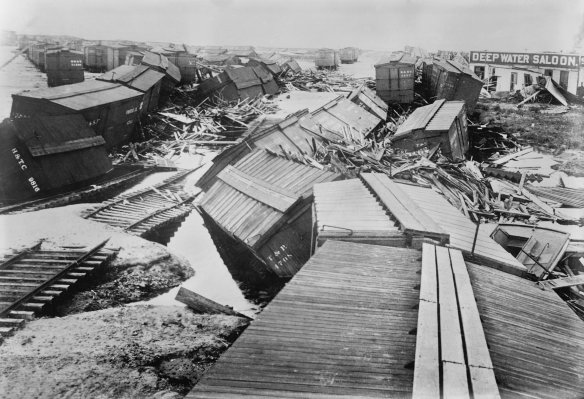 How Past Hurricanes Can Help Us Prepare for the Next
Next Up: Editor's Pick