A Sleep Storyteller Reveals Her Secrets for Drifting Off Naturally

Illustration by Tommy Perez for TIME
By Phoebe Smith

It starts on a crisp winter night. Outside it’s dark and cold, the grass already coated with a thick, white layer of hoarfrost. Inside I sit–wrapped in a blanket, drinking my hot chocolate, surrounded by the orange glow of candlelight, with lavender incense diffusing into the air–slowly and purposefully crafting a tale. One designed to send millions of people, like you, drifting off to sleep.

It sounds like a peaceful scene. One so soporific I might send myself off to dreamland before I’ve finished my story. But it hasn’t always been this way.

Earlier in the day, everything was frantic. With deadlines looming, calls to make and emails to answer, it was like my phone was alive, lighting up with job after job, demanding my attention with high-pitched alerts and jarring beeps. It’s easy to let a smartphone’s incessant needs flood into our bedrooms too. And that, according to professor Orfeu Buxton, editor in chief of the journal Sleep Health, is why many of us are losing our ability to drift off naturally.

“When we sleep, things that keep us awake or disrupt our sleep are generally called threats,” he says. “We’re mammals, after all; we’re not computers. We don’t just shut off and sleep. These threats can be endogenous–internally generated, like if you have stressful thoughts–or they can be exogenous, such as the noise of an ambulance or pinging notifications on your phone overnight. All those engage the threat vigilance detection centers in our brain.”

Phones–and their alerts–have been designed to steal our attention. So about 10 years ago, desperate to sleep better, I fully removed myself from my phone’s reach. I took up wild camping–sleeping in remote and wild places around the country, away from campsites, people and, crucially, wi-fi. Sometimes I head off for a week with no contact with the modern world, other times for just a single night. No matter which way I choose, it always seems to reset my sleeping pattern effectively.

My quest for these sleeping adventures has led to some extreme bedtime scenarios. I’ve dangled off the edge of a sea cliff while seals frolicked below in the waves. I’ve bedded down inside caves where the only light comes from my own campfire. I’ve lain on mountaintops watching the stars and listening only to my breath as it clouds above me, then dissipates into the night sky.

And although, to some people, they may sound like scary places to take a pillow, I’ve found over the years that they often lead to the best night’s sleep. I am suddenly forced to see my concerns from a different perspective. How on earth can answering an email be anywhere near as important as sourcing clean water? How can posting on social media rank with staying warm, dry and safe? And why would answering a message be a worry when I need to navigate my way in the dark?

There’s another primal function I tap into by sleeping outdoors: resetting my circadian clock.

“We all have an internal clock in our brain that tells us what biological time of day it is,” says Ken Wright, a professor at the University of Colorado and director of a sleep lab. By sleeping in nature the way I do, I not only physically remove myself from exogenous threatening sounds and the demands of my smartphone, but also expose myself to natural light, which results in a better quality of sleep.

I realized a while ago that I could use my adventures to help others who also struggled to sleep. Words have the ability to soothe and calm. By writing about my wild sleeps, I could bring my fellow insomniacs with me. When we were kids, many of us were read to by a grownup–the bedtime story was (and still is) a classic way to get restless children to nod off. But many of us decided we were too old for this, that we had grown out of it. Which is why I began to write special nonfiction bedtime travel stories for adults–the aim being that they would never reach the end.

“When you try to sleep, your mind monitors your efforts, which actually keeps you awake,” says Dr. Steve Orma, a clinical psychologist specializing in insomnia. “Doing something calming before bed, that’s designed to help you let go and take you elsewhere, will prepare your body for sleep.”

In my Sleep Stories, each word is chosen carefully. Adjectives–which in literature are often removed or allowed only sparsely–are necessary in a bedtime tale to transport you to the place I’m in, so we can wander together through lavender fields in Provence, meander along the waterways in Oxfordshire, travel aboard South Africa’s slow and steady Blue Train, or listen to the wind in the leaves amid the giant cedar trees in Morocco’s hidden forest.

The sound of words is also key. I must choose them in such a way that they delicately inform what we can see, in a tender and comforting way. No loud sounds are found in these sentences, only peaceful, lulling prose. Then there are the other senses. Smells evoke images and sensations that relax and reassure. Sights must be captivating enough that you want more, yet magnificent enough that you are lost within them.

There was never a rule book for writing Sleep Stories–my techniques started with intuition and the drive to try to create something that I would like to have read to me when I was snuggled up in bed, surrounded by the warmth of my duvet. As time has moved on, as it always does, I listen to feedback I get from listeners, for places and themes that people tell me have made them feel most comforted, most relaxed, and then decide on my next destination and the journey I will take them on with another tale.

The process to write these stories can take many hours, but I always begin penning them in the same setting as I did the first time I wrote one on that winter’s night. Everything must be perfect: the lighting dim as though I were outside in my camp, the sounds soft, the phone off and out of reach, and my imagination allowed to feel as free as though it were on a mountaintop.

Only then can I begin to take you with me on a journey, one whose ending you may never even reach. But in which I know you will become immersed, snuggled into a world I’ve created for us both, where candlelight flickers, where all the world remains on the other side of the door. When my tale becomes your tale, we are both free to dream.

Smith is the sleep storyteller in residence for the app Calm and the author of Extreme Sleeps: Adventures of a Wild Camper 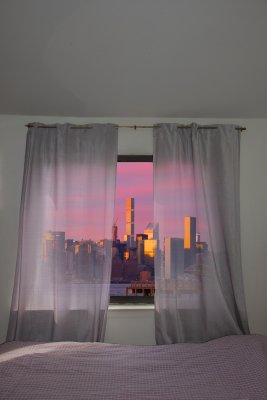 Individual Circadian Clocks Might Be the Next Frontier of Personalized Medicine
Next Up: Editor's Pick