Demonstrators gather outside the U.S. Department of Education for the Black Students Matter march, organized by Educators for Equity on June 19 in Washington, DC.
Matt McClain—The Washington Post/Getty Images
Ideas
By Erica Hines and Michael Hines
Erica Hines is network director for the National Center for Teacher Residencies, which launches and supports clinical teacher preparation programs nationwide.
Michael Hines is an assistant professor with the Stanford Graduate School of Education, where his research and teaching focus on the history of education in the United States and on African American Education.

Growing up with Black teachers as mothers, we lived in households where discussions of education were ever-present, involved and sometimes, to our annoyance as children, inescapable. Both of our moms spent their years in the classroom fighting to replace outdated and racially biased curricula, clashing with colleagues who substituted punishment for pedagogy, particularly when dealing with Black students, and struggling against the low expectations of administrators with limited visions of Black potential. (Erica’s mother taught on a military base in southwestern Germany as part of the Department of Defense Dependents Schools. Michael’s mother taught for Jefferson County Public Schools in Louisville, Ky.)

As the children of families with roots in teaching and social activism extending back generations, as former teachers ourselves, and as professionals whose work continues to revolve around classrooms and communities, we have been continually reminded that improving the prospects for Black youth in America’s schools means developing and diversifying the teachers inside them. In other words, if we take seriously the call to reimagine and restructure our schools in ways that recognize the value of Black lives, then a much larger focus on the recruitment and retainment of Black teachers is nonnegotiable.

It is difficult to overstate the political, pedagogical and personal importance of Black teachers. During Reconstruction, it was Black teachers, many of whom were formerly enslaved, who laid the foundations for public education throughout the South. In the early 20th century, they formed the rank and file of reform organizations like the National Association of Colored Women (NACW), National Association for the Advancement of Colored People (NAACP), Association for the Study of Negro Life and History (ASNLH), and National Urban League. During the Great Migration, they were pivotal in opening access to broader opportunities for Black youth in Harlem, Chicago, Detroit and other cities in the urban North. Teaching was never simply a career for these educators. It was part of a larger social and political mission. It was a tool to be used for the liberation and empowerment of the race as a whole.

The best contemporary research reinforces what historical anecdotes reveal. Black teachers today are, by nearly every metric, more successful at supporting the achievement and well-being of Black children. Black students who have even one Black teacher during elementary school are more likely to graduate high school and consider college. Black students with Black teachers experience less exclusionary discipline and fewer office visits, a crucial break in the school-to-prison pipeline, a disturbing and widespread trend in which school-discipline interactions lead to interactions with the criminal justice system. And it is not only Black students who benefit from being taught by Black teachers; research has shown that students of color believe teachers of the same race hold them to higher expectations and are more culturally sensitive than their white counterparts. These skills and mindsets are critical, especially now, as Black students face a new wave of trauma initiated by police violence against Black bodies, and schools grapple with the ways in which they often perpetuate racist systems.

Yet as impactful as Black teachers have been and continue to be, their numbers began to decline significantly in the 1960s and 1970s. Much of this loss was due to the unequal impacts of desegregation, which consistently placed greater burdens on Black communities. Black teachers and administrators often lost their positions as their schools were shuttered and their students transferred to majority white institutions. A generation of Black teachers were pushed out of the system at the moment when their expertise and experience were needed most, and even after decades of collective handwringing, the percentage of Black teachers in public schools remains stubbornly low, hovering around 7% today. Advocates, from teacher educators and academics to nonprofits and parent organizations, have all worked to change this reality. Yet systemic barriers present ongoing challenges. For example, for many Black teacher candidates, who are more likely to come from backgrounds with limited financial resources, the expectation to forego at least one year’s salary while completing coursework and student teaching is an impossibility.

Because Black teachers enter the field in lower relative numbers than their peers of other races, because they are more likely to secure placement through often-inadequate alternative preparation, and because they take on more difficult teaching assignments and are thus less likely to persist in the profession, we must purposefully seek out and invest in those teacher-preparation models that have shown real results in reducing barriers to entry and empowering Black teachers to stay in their chosen profession for the long haul. The National Center for Teacher Residencies’ Black Educators Initiative, funded by Ballmer Group, is one project that is actively addressing each of these issues. BEI, a five-year, $20 million effort to recruit, develop and retain 750 new Black teachers within NCTR’s network of teacher-preparation programs, provides a space where residency-program leaders can learn together and develop new strategies to confront the issues most likely to hold Black educators back.

Programs supported by NCTR and its Black Educators Initiative don’t hope for a diverse class of candidates to land on their doorsteps. Instead, they set hard goals around recruiting from the communities they serve. They base selection on the factors that best correlate with effective teaching, removing vague criteria that introduce bias into the selection process, such as ratings of a potential candidate’s “resilience” or “organization.” They employ culturally responsive and high-touch recruitment strategies, checking in with candidates multiple times throughout the application process.

Once teacher candidates are accepted, these programs intentionally design the curriculum they are exposed to, building courses that explicitly address the teacher’s role in interrupting injustice and preparing candidates to select and use diverse texts and techniques. They create emergency funds for candidates to draw from when faced with unexpected circumstances. They organize and support affinity spaces within their programs, so that teachers of color can discuss the unique challenges they face, encourage one another and build skills together. They pay for additional tutoring to prepare candidates for state licensure exams, and they cover testing fees for those who cannot afford them. They offer stipends to offset living expenses during student teaching.

Each of these strategies have been shown to have a major impact on the number of Black candidates who ultimately enter the classroom. And while independent residencies often excel at these strategies due to greater flexibility and autonomy from larger university systems, they can be applied within traditional schools of education or in other alternative preparation models as well. There is no magic solution for recruiting and retaining Black teachers or teachers more generally–indeed there is mounting evidence of a national shortage of teachers of all races and backgrounds–but these strategies have each shown real and reliable results that can and should be implemented more consistently across settings.

As recent conversations about the role of systemic racism in our institutions including schools have made clear to many, platitudes are not enough to effect the kind of radical change necessary to safeguard the lives and futures of Black youth. However, for every Black teacher who enters a school building, Black students are able to see a mirror reflecting their own experiences and perspectives, and a window into their future. We were lucky enough to have those mirrors in front of us every day, both at home and in school. Strengthening the pipeline of well-prepared, well-resourced and well-supported Black teachers in our schools would help extend that kind of experience to thousands more. 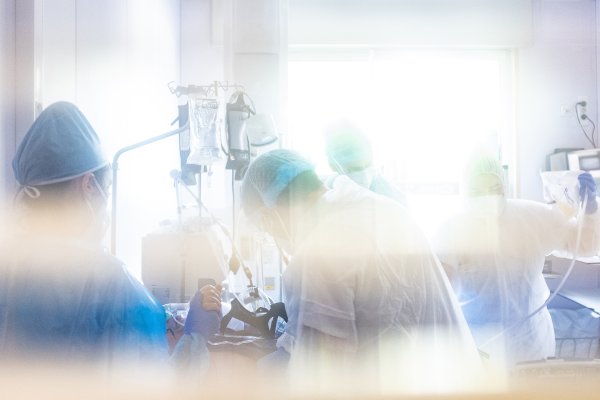 We Need to Care for Long-term COVID-19 Patients
Next Up: Editor's Pick