Illustration by Tim O'Brien for TIME
Ideas
By D.W. Pine
D.W. Pine is the Creative Director at TIME.

For the cover of the Aug. 17, 2020 issue of TIME, longtime collaborator Tim O’Brien revisited his award-winning series depicting the mounting troubles facing President Trump. The new cover is the fourth installment and the first to depart the Oval Office, painting Trump at sea surrounded by COVID-19, as the White House recedes from view. It accompanies a cover story by TIME national correspondent Molly Ball on the ways the pandemic is transforming the 2020 election.

“For the past year, I’ve been pondering one more cover in the series, but there was always a new intervening controversy, scandal, social upheaval, or norm-crushing tweet to change the story,” says O’Brien, a Brooklyn artist who has been creating TIME covers for more than 30 years.

“The rising water as a metaphor for chaos in the Trump White House could only end two ways,” adds O’Brien, who has painted more TIME covers (32 and counting) than any artist in the past 50 years. “So he survives only to be in the surging waves surrounded by coronavirus, each one a little bomb.”

O’Brien’s work has appeared in publications around the world, as well as on several U.S. postage stamps including the popular Hunger Games trilogy. Two of his TIME magazine covers – one with Bill Clinton and Bob Dole and the other with the “Grand Old Populists,” both published in 1996 – reside in the National Portrait Gallery at the Smithsonian in Washington, D.C. 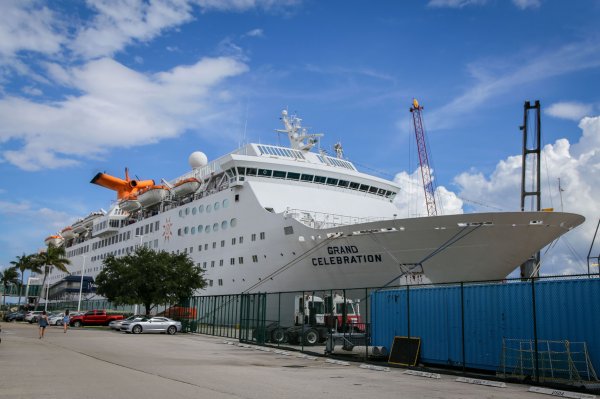