(Miss this week’s The Leadership Brief? This interview above was delivered to the inbox of Leadership Brief subscribers on Sunday morning, Aug. 9; to receive weekly emails of conversations with the world’s top CEOs and business decisionmakers, click here.)

Banks offer a front-row seat to the state of the economy. After a brutal second quarter for the U.S, Bank of America CEO Brian Moynihan believes that the worst is behind the country. Still, his bank’s economists predict that the unemployment rate will be at 10% at the end of the year and that the economy won’t fully recover to 2019 levels until early 2023.

BofA, like other banks, has played a critical role in getting government stimulus funds into the hands of cash-starved businesses: It processed 334,000 Paycheck Protection Program (PPP) loans, delivering $25 billion in funding for small businesses. At the same time, the bank has worked with major corporations to bolster its balance sheets, raising $461 billion in capital for clients (earning record fees for its investment-banking unit in the process).

Moynihan, who in college was a co-captain of the Brown University rugby team, worked as a corporate lawyer before moving into banking and became CEO of BofA in 2010. He led a turnaround at the bank after a near crippling 2008 acquisition of troubled subprime lender Countrywide Financial, attracting Warren Buffett as a major investor along the way. Buffett’s conglomerate, Berkshire Hathaway, in recent days increased its holding in BofA, bringing its total ownership stake to approximately 12% of the company. Moynihan, 60, joined TIME for a conversation about the need for additional stimulus, why he’s optimistic about America and its economy, and why Winston Churchill is a good role model for these times.

This interview with Bank of America CEO Brian Moynihan has been edited and condensed for clarity.

How would you characterize your economic outlook right now?

We’re optimistic as a company. We continue to see clients making progress; we continue to see the stress in the system come down because of the work the Fed did and the stimulus work that was done.

Even with a forecast of double-digit unemployment at year-end?

Now, you could say, “How is that optimistic?” The answer is, what’s optimistic about it is the worst is behind us. April was the worst month, May was a less worse month, June was better, and in fact July was even better than June. You’re going to have some ebbs and flows based on the virus track, but I think you have to be optimistic that you’re seeing the U.S. consumer continue to spend.

How important is it that the government passes another round of stimulus? [This interview was conducted Monday, Aug. 4, when there was still ongoing negotiations on the a new stimulus package.]

Let’s start with the beginning, that the Administration, Congress and the Fed did a very good job to step in at the end of March, to really put a lot of money into the economy, directly in the hands of the people who needed it most to maintain their ability to survive with an unemployment rate that went up to 15%. If you think about the analogy being a river that we’ve got to cross from pre-COVID to post-COVID, and need to get past COVID, and the river between is the COVID period, some industries are already past COVID because of the nature of what they do. The idea is to keep the money flowing to the people who are still in the process of crossing the river, as opposed to the people who have crossed.

What is your view of the newfound concern about deficit spending?

I think we’ve got to make sure the largest economy in the world recovers fast. If you talk to colleagues around the world, they are very concerned that the U.S. gets out of this because the U.S. economy is so big and creates such demand around the world for the rest of the economy. The idea of worrying about the ultimate deficit right now when you’ve got to get us to the other side of this thing is something that I think we can deal with later on.

So now is not the time to get religion on deficits?

It’s the time to make sure that you’re spending money to keep the economy recovering.

That’s a political question in terms of getting this done that’s better served for the political advisers we have. Our job is to make sure we deal with whatever comes out of it well.

I hear you, but what should the business community be doing now in Washington to throw its considerable weight around to make sure there’s good outcomes for the country?

The No. 1 thing is businesses have to do what we can do inside our own companies to help blunt this for our teammates. And so, we’ve announced no layoffs; we’ve announced enhanced childcare. We’ve enhanced the pay at our branches; we’ve enhanced the overtime. The No. 1 thing is to take care of your people, and make sure they’re safe, and make sure that they can serve your clients well—then take care of your clients.

BofA is credited with doing a particularly good job of getting PPP funds quickly into circulation. Can you talk about that effort?

The team’s done a great job of getting people through this and helping provide $25 billion–plus of funds to our clients. At one point, we probably had 10,000 people working on this. We spent a lot of resources, a lot of time, a lot of effort. We had to take people off a lot of other places. Volunteers. People working every weekend. Easter holiday weekend. Saturday and Sunday. Overnight. It was all based on the basic principle that the American small-business community needed to get this program in their hands, and it was our job to push it through. We took it as an obligation to help deliver that for the government, and we did.

TIME for Learning partnered with Columbia Business School to offer a series of online, on-demand classes on topics like effective leadership, negotiation and customer-centric marketing. To sign up or learn more, click here.

You’ve also been active in helping corporate clients beef up their balance sheets.

What happened in mid-March to mid-April is that the companies came in and borrowed hundreds of billions of dollars from the banking system, including $70 billion in two weeks from us, with commercial loans.

What’s going on with M&A activity and the advisory business?

How much interaction do you have with Warren Buffett, who just made another series of investments in BofA? Do you two have a regular call?

We talk periodically. But he wants us to run the company and do a good job with it.

Any particularly memorable insights that he’s shared with you?

He’s a great long-term thinker. The one thing that he both talks to, but also gives you confidence in, is just see where the long-term value of your company is and make sure you’re driving toward that, and not get caught up in the issues of the moment. It’s the work we did over the last decade that positions us well for the COVID-19 crisis; it’s not what we’re going to do today.

We had as much cash go out of the ATMs in the month of July this year as we did last July, and that is $200 million–plus a day. But the digital part of this really grew through online digital purchases, online payments. And by the way, it’s a very good thing if Americans learn how to use less cash, and what you’re doing is, when you go to a coffee shop and you pay with your phone, you will see that grow at a good, fast rate.

Wait, cash is not dead? I thought people didn’t want to touch cash and that contactless payments were all the rage.

Yes, the cash piece is still big—it’s as big as the credit-card piece.

I know the answer to this is “They’re spending it,” but do you have any particular insight into what people doing with the cash? Maybe they are buying print newspapers and print magazines.

It’s still useful to pay for things. People still use cash to buy things every day. Not necessarily the $300 item, but the $10 item. That’s been changing slowly but surely, but cash is still out there, and so one great service that we provide is 18,000 ATMs and 4,000 branches that help people manage cash. Small businesses collect cash, they deposit it; and people use it. Long-term though, the trend of movement from dollar bills to digital dollar bills is relentless.

What type of behavior will you not tolerate on your management team?

People who are passive-aggressive. If you have a point, make it in front of everybody. Life’s busy; there’s not a lot of time. People who sit in a discussion and then come out and try to either talk to me afterward saying, “Well, this is what I thought.” That doesn’t do me any good because we need to process it together as a team.

I understand you’re an admirer of Winston Churchill.

It was unbelievable how he held the country together. You have to admire that kind of tenacity. One of my favorite things when we get into discussions about charities, museums and culture—and whether the story is 100% true, because a lot of Churchill stories can get embellished over the years—but there was a year when they were discussing the budget and Parliament cut the funding for the arts. And Churchill, in the middle of World War II, when they’re getting bombed and scraping by, said, “If we’re not funding the arts, what are we fighting for?”

What is the biggest, most complicated decision on your plate this week?

I’m not sure I can tell you that.

Forgive me for ending on a philosophical note, but it’s about your name, Bank of America. What does America mean right now? I was in a Home Depot over the weekend and witnessed a rage-filled mask confrontation, an ugly, ugly exchange. What does America stand for right now?

America still represents the best place for opportunity to be recognized. Capitalism provides great opportunity. We have to keep focused on capitalism as the solution to the deep problems, but we have to be mindful that we have to manage capitalism to fully align it with what society wants from capitalism. You’ve got to produce profits and purpose. We believe that fully in running our company, and I believe that’s what America stands for: the ability to solve the world’s great problems. It’s an unfinished dream and continues to provide great opportunity. We’ve got to fine-tune it; we’ve got to fix it where it didn’t work right.

AUTHOR: The three that I read the most are James Patterson, David Baldacci and John Grisham. It’s not a world I’ve ever played in—spy novels—but they’re fun to read.

EXERCISE: I work out in the mornings in sort of a CrossFit nature.

ONE LAST SURPRISE QUESTION: IF YOU WERE STARTING OVER AGAIN, WHAT WOULD YOU DO INSTEAD?

If I had a talent, I’d have loved to have been an architect. 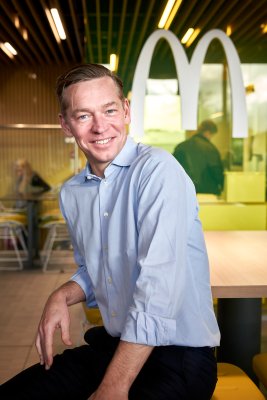 McDonald’s CEO Chris Kempczinski on Changing Consumer Behavior and the Future of Those Ball Pits
Next Up: Editor's Pick