Despite What the White House Says, Unemployment Aid Doesn’t Encourage Americans to Stay Out of Work

People crowd around an OESC employee to get a number at an unemployment event in Tulsa, Oklahoma on July 15, 2020.
Nick Oxford—The Washington Post/Getty Images
By Philip Elliott

In almost every political fight, you can count on one thing: the creation of a stereotype that can summon critics’ outrage and make its defense indefensible. Ronald Reagan’s 1976 bid for the White House introduced America to his twisted iteration of the “welfare queen” who exploited public assistance to live large. Hillary Clinton dubbed her foes “the vast right-wing conspiracy” and, later, “the deplorables.” Barack Obama forced his signature healthcare law into reality by mobilizing his backers against the specter of big insurance companies’ reflexive greed.

Today President Donald Trump’s Administration has added a new member to this long list of political boogeymen: the 31 million Americans who lost their jobs during this coronavirus pandemic and are now cast as bilking the system through unemployment benefits deemed too generous.

“We want to fix the issue where in some cases people are overpaid, and we want to make sure there’s the right incentive,” Treasury Secretary Steven Mnuchin told ABC News in an interview that aired on Sunday. It matches the rhetoric of his fellow Republicans in the White House and in Congress as they reject Democrats’ efforts to extend the temporary $600 supplement for out-of-work Americans that expired last week.

Casting a broad slice of the country as exploiters of taxpayer generosity isn’t a new tactic. Nor does it necessarily work. Just ask Mitt Romney, whose 2012 presidential campaign sank when he said 47% of Americans were basically freeloaders. And that was before COVID-19 tanked the U.S. economy, sent one-third of its G.D.P. into the garbage and left Americans’ confidence spiraling.

On the surface, it seems absurd that some workers could be making more money while staying home than they were while at their regular jobs. But that was, at some point, the case for as many as two-thirds of workers, based on a May paper from the University of Chicago. It stems from the now-expired $600 federal supplement to their state unemployment benefits, as well as a pandemic that hit the lowest-paid workers the hardest. Starting this week, millions of unemployed Americans will be left to get by solely on state-provided unemployment insurance. The average state unemployment benefit is $380 per week; in places like Mississippi, the payout can be as little as $235 per week.

In a rational and amoral system, many Americans should have chosen to stay home and collect the bigger checks during that window. But Americans are not always rational creatures. In fact, of the workers who went back to their jobs in June, 7 out of 10 actually took pay cuts to go back to the workplace, according to one analysis. Another Yale study found workers who made more money while out of a job out-paced their neighbors in returning to the workforce. A Federal Reserve Bank of Chicago survey found those receiving the amped-up unemployment benefits were spending twice as much time looking for a job as the typical out-of-work American. And in a survey of unemployed Americans from the Bipartisan Policy Center, only 16% said they were staying home because of the added federal cash.

In other words, Americans like to work. Spending 40 hours a week on their feet may penalizes them relative to spending that time on a couch, both monetarily and by posing an increased threat to their health and their families’ physical wellbeing. But for many, in a time of utter non-normalcy, getting back to even the worst-paying jobs restores some sense of calm. 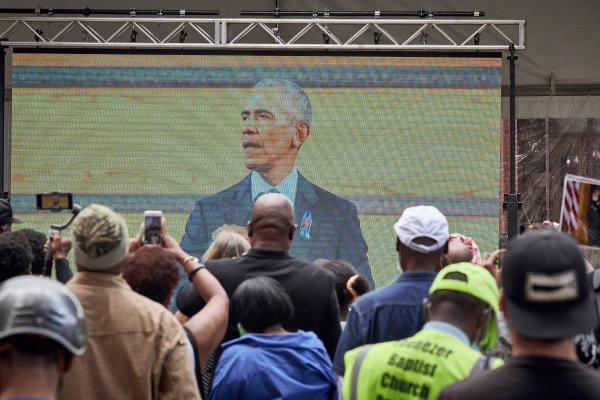 Obama: The Best Way to Honor Lewis? Ditch the Filibuster
Next Up: Editor's Pick