What We Learned About Paid Sick Leave in the U.S. From the H1N1 Outbreak

A worker wearing personal protective equipment (PPE) gives a pedicure to a customer outside of a nail salon in Palo Alto, Calif. on July 28, 2020.
David Paul Morris/Bloomberg via Getty Images
By Jasmine Aguilera

The last time the U.S. experienced a pandemic, advice to working Americans was similar to the message officials are sharing today—stay home.

Similar to today’s COVID-19 outbreak, the 2009 H1N1 pandemic laid bare issues of inequality in the U.S., including disparities in paid sick leave. In 2009, the federal government did not have a federal paid sick leave policy, and it still doesn’t today, forcing U.S. workers to make the impossible choice between financial and personal health. But there are important lessons we can learn from the past, says Keshia Pollack Porter, director of the Johns Hopkins Bloomberg School of Public Health Institute for Health and Social Policy.

“We know that the workers who are most in need are least likely to have access to paid sick leave,” Pollack Porter tells TIME and Retro Report. “It’s overwhelmingly low income workers, workers of color, people who work in small businesses, that just tend not to have access to these types of benefits.”

But even with access to sick days, U.S. workers might still show up for work when sick because of cultural expectations. “We live in a society where work is important to our material wellbeing, a central part of our identity, our creativity,” says Debra Lerner, director of the Tufts Medical Center Program on Health, Work and Productivity.

As in 2009, employers today are grappling with an influx economy, and the burden of paid sick leave in the U.S. often falls on that employer, causing added financial pressure, an issue that only exists in a handful of countries around the world. 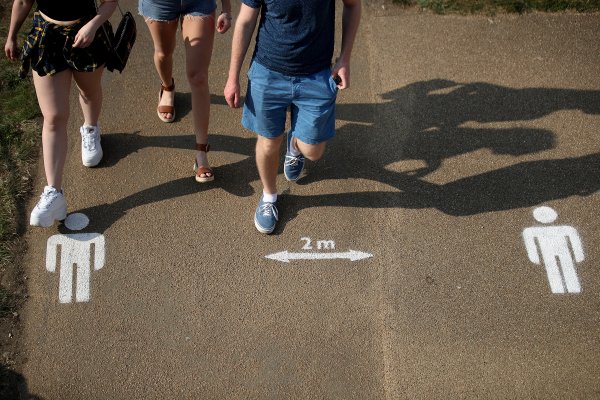 What We Don’t Know About COVID-19 Can Hurt Us
Next Up: Editor's Pick