Like millions of American workers, Mercedes Taylor, an overnight security guard at Houston’s William P. Hobby International Airport, has been forced amid the worsening pandemic to make a grim calculation. As a 69-year-old asthmatic with high blood pressure, Taylor is susceptible to complications from COVID-19, but her need for a paycheck outweighs her concerns for her health.

It’s a frustrating position to be in, Taylor says. While the airport has provided workers with masks and hand sanitizer, she says management has not been forthcoming when employees test positive. “It alarms me that they don’t feel the need to tell you, ‘You might want to go get tested, you may have been exposed,'” she said. Her frustration increased this week when she learned that Congressional Republicans’ new COVID relief bill includes a proposal that would shield nearly all public and private organizations—including her airport—from legal liability if workers got sick on the job.

“We’re getting $12 an hour. We have no sick days,” Taylor says. “For them to be concerned about the liability of employers and them not being sued versus the employees who have been consistently showing for work and providing a service? I’m very disappointed.”

The Republicans’ 65-page proposal, introduced by Texas Sen. John Cornyn, and backed by the White House, would shield all corporations, schools, healthcare organizations, non-profits and religious institutions from most COVID-19-related lawsuits. Under the proposed language, corporations and organizations that are following any form of public health guidelines could not be held liable if a worker contracted COVID-19 on the job. If the legislation passes as it’s written, a worker who wants to sue for a coronavirus-related death or injury must prove that the organization in question engaged in “willful misconduct or gross negligence.” These terms would retroactively apply from December 2019 through October 2024.

Democrats and labor advocates argue that by making the standard of proof so high, the Republicans’ bill grants “blanket immunity” to public and private organizations, all but eliminating their responsibility for their workers’ safety. “It would essentially make it impossible to sue for a COVID-related injury,” says David Vladeck, a law professor at Georgetown University who testified before the Senate Judiciary Committee in May.

“The goal here is to completely insulate businesses, schools, universities, anyone who is a service provider from any immunity at all. It sends a signal to the American people [that] we don’t care about your health,” he added. “If you get hurt from someone else you have no recourse. Zero recourse.”

McConnell and Cornyn say that’s not a fair characterization of the proposed law. “It will not ban coronavirus lawsuits, and it will not give anyone a ‘get out of jail free’ card,” Cornyn said on the Senate floor on Monday. “What it will do, though, is put safeguards in place that will prevent opportunistic lawsuits from harming the workers and institutions we are depending on to see us through this crisis.”

McConnell says liability shields are crucial to the U.S. economic recovery and warns of the prospect of “a second pandemic of opportunistic litigation enrich trial lawyers at the expense of Main Street and medical professionals.” “No bill will be put on the Senate floor that does not have liability protection,” he told reporters on Tuesday.

Big business lobbyists have been pushing for strong liability protections for months. The Chamber of Commerce spent $12.3 million lobbying Congress and the White House between April and June in part on liability protections, disclosure records show. Smithfield Foods, a defendant in one coronavirus-related lawsuit, paid a top lobbying firm, Holland & Knight, LLP, $230,000 to lobby for liability provisions. The American Medical Association, the physicians’ powerful lobbying arm, spent over $10 million to push for the shields. Trade associations representing real estate developers and airlines both spent more than $1.5 million.

Daniel Auble, a senior researcher at the Center for Responsive Politics, which tracks political spending, says lobbying disclosure forms have shown “considerably more attention being paid to ‘liability’ and ‘tort reform.’ In 2019, according to data Auble provided to TIME, 145 firms were hired to lobby for liability protections. By 2020, that number had increased to 291.

“We started hearing from our members, across all industries, of all different sizes, that one of the things they were anticipating was the potential for, from their perspective, very frivolous lawsuits,” says Neil Bradley, an executive vice president who oversees policy at the Chamber of Commerce. “We’re constantly learning about new and better ways to prevent the spread of the disease. That creates an opening for a lot of folks who want to argue that an employer should have done more than what they did, which has a chilling effect on your ability to reopen.”

It’s not yet clear what version of a COVID relief bill Congress will pass. Any bill will require bipartisan support to get to the President’s desk, and Democrats widely oppose the Republicans’ liability measures. The version of a relief bill that House Democrats passed in May does not include liability protections at all. It instead requires the federal agency, Occupational Safety and Health Administration (OSHA), to set a national standard for workplace protection from the virus based on recommendations from the Centers for Disease Control and Prevention.

Democrats say that the Republican proposal goes too far and that a viable package must include protections for workers. “We want to make sure regulations – OSHA regulations or others – are followed and are sufficient to protect patients, customers, employees, and others who are utilizing services or public accommodations, that people are making sure that they make every effort available to them to protect people in this environment,” House Majority Leader Steny Hoyer said Wednesday. “That will be the context in which we have discussions on liability.”

As millions of frontline workers like Taylor have continued to go to work despite the pandemic, a handful of COVID-related court cases have cropped up. In April, an anonymous worker in a Smithfield Foods meat processing plant in Missouri sued the company in federal court, alleging that it was failing to provide protective equipment and enforce social distancing policies. In May and June, McDonald’s workers filed lawsuits in Illinois and California making similar allegations. In June, Amazon employees at fulfillment centers in New York and California filed two separate lawsuits, both alleging the company’s work conditions were causing them to spread the virus to their families and communities.

Chiyomi Brent, a California Amazon employee who filed one of the lawsuits, said on a July 20 press call that she only went to the courts after she had raised concerns with her manager and filed a complaint with the California division of OSHA that went unheeded. “Without the ability to file a lawsuit, Amazon would be able to get away with its actions, and more Americans would needlessly get sick, or even worse, die,” she said. “It is my hope that workers in every industry will be safer because of my lawsuit.”

But litigation like this isn’t very common, in part because it’s often costly for everyone involved, and in part because it’s hard for workers to win. (The case against Smithfield Foods was dismissed in May, with the judge ruling the matter fell under the jurisdiction of OSHA). American Association for Justice (AAJ), a trade group for trial lawyers that opposes the liability shield legislation, analyzed a database of the more than 3,400 coronavirus-related lawsuits compiled by the law firm Hunton Andrews Kurth. It found that just 161 were for wrongful death or injury from the virus.

AAJ executives say the cases filed against corporations like Amazon and McDonald’s were critical in shaping the national conversation about the rights of frontline workers. “Senator McConnell is seeking to cut off one of the only tools Americans have to keep themselves safe,” says Julia Duncan, Senior Director of Government Affairs for the organization. “Just the filing of these cases can protect hundreds of thousands of workers.”

Taylor, who says she has no intention to sue her employer, argues that’s not the point. The real issue, she says, is that at a time of great peril, workers’ protections should not be rolled back.

“I just think they can do better,” Taylor says of Congress. “I don’t mind working, I don’t mind rolling up my sleeves, but it’s a little bit annoying when I don’t feel like I’m being regarded.” 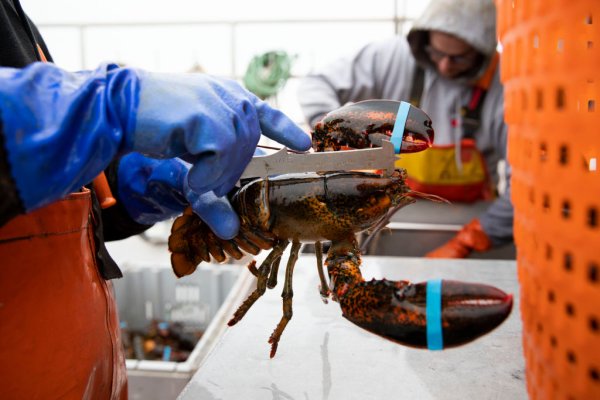 How Maine's Lobsters Got Trapped in Trump's Trade Wars
Next Up: Editor's Pick