By GILLIAN FLACCUS and ANDREW SELSKY and JONATHAN LEMIRE / AP

Acting Homeland Security Secretary Chad Wolf said in a statement the plan negotiated with Brown over the last 24 hours includes a “robust presence” of Oregon State Police in downtown Portland.

“State and local law enforcement will begin securing properties and streets, especially those surrounding federal properties, that have been under nightly attack for the past two months,” Wolf said.

The agents will begin leaving the city’s downtown area on Thursday, Brown said.

Before departing Wednesday for a trip to Texas, President Donald Trump insisted federal troops would not leave Portland until local authorities “secured their city.”

The U.S. Marshals Service and Department of Homeland Security had been weighing this week whether to send in more agents. The marshals were taking steps to identify up to 100 additional personnel who could go in case they were needed to relieve or supplement the deputy marshals who work in Oregon, spokesman Drew Wade said.

The nightly Portland protests began after George Floyd’s death at the hands of Minneapolis police and have grown to include the presence of federal agents in Portland and other Democratic cities.

Protesters have tried almost every night to tear down a fence erected to protect the building, set fires in the street and hurled fireworks, Molotov cocktails and bricks, rocks and bottles at the agents inside. Authorities this week reinforced the fence by putting concrete highway barriers around it.

Demonstrators near the courthouse Wednesday were met before dawn with tear gas, pepper balls and impact munitions fired by agents, the Oregonian newspaper reported. 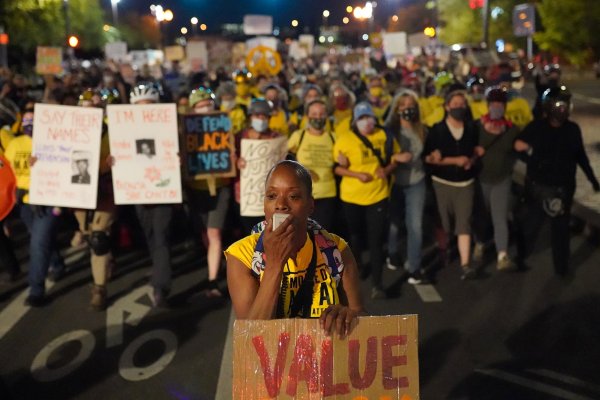