‘Are We Not American Soldiers?’ When the U.S. Military Treated German POWs Better Than Black Troops

For Corporal Rupert Trimmingham, it came as no surprise that he’d have to eat inside the lunchroom’s kitchen, invisible to the diners enjoying table service. This was 1944, and the Deep South. Trimmingham and eight other Black soldiers were en route from Louisiana’s Camp Claiborne to Arizona’s Fort Huachuca and, as he later wrote, he knew the only boss was “Old Man Jim Crow…”

But what Trimmingham and his companions saw as they looked out at the lunchroom from inside that kitchen defied even their weary expectations. About two dozen German prisoners of war who entered with their American guards “sat at the tables, had their meals served, talked, smoked, in fact had quite a swell time.” In an April 1944 letter to Yank, a weekly Army magazine, Trimmingham asked the obvious: “Are these men”— Nazi troops who’d been captured while fighting on Hitler’s behalf—“sworn enemies of this country? Are we not American soldiers, sworn to fight for and die if need be for this our country? Then why are they treated better than we are?”

Though this is perhaps the best-known incident of its kind—it inspired a fictionalized short story in the June 17, 1944 New Yorker—it was common during World War II for the U.S. Army to treat German Prisoners of War better than Black American soldiers. Segregation was official military policy until 1948, when President Truman signed an Executive Order banning the practice in the Armed Forces. Black American soldiers, including the 1 million who served during World War II, were often relegated to less desirable roles and excluded from promises of patriotic camaraderie. This particular brand of discrimination, however—the preferential treatment of imprisoned Nazi combatants—was especially offensive to many Black troops. It told them, loud and clear, that they were fighting for a country even as that country fought against them. For many white military personnel, there was no point in even pretending otherwise.

In February 1944, a Black soldier named Bert Babero wrote in a letter that a POW camp in Texas segregated “a section of the latrine for Negro soldiers, the other being used by the German prisoners and the white soldiers,” thereby placing “the tyrant…over the liberator.” At least two camps in Mississippi treated POWs to “white” latrines and water fountains as well. More than 50 years later, in his 1997 book A-Train: Memoirs of a Tuskegee Airman, Charles W. Dryden recalled a visit to a base in South Carolina, where German POWs could go “into the ‘White’ side of the post exchange cafeteria and WE COULD NOT!”

This preferential treatment of German POWs seemed, at times, specifically designed to humiliate Black soldiers. In 2004, the historian Matthias Reiss published a study of letters by Black soldiers that document this reality. At Camp Gordon Johnston, in the Florida Panhandle, Black servicemen reported that they were assigned to “dispose of the human waste of the whole camp,” including that of the POWs. A soldier named Private Joseph said that, when he was put in charge of a job detail in Utah, German POWs refused to work for him due to his race. The white officers, meanwhile, responded that “colored BOYS are not allowed to detail or work prisoners of war”; another soldier in Florida reported a similar hierarchy on base, where Black men “were constantly guarded by armed guards” even if their offenses were minor, “while the Nazis arrogantly walk around this field free and scoff at us.”

That added element—the Germans’ smug sideline voyeurism—stung Black soldiers in its own way. In a 1995 interview, John Hope Franklin described a segregated train, where he and scores of Black soldiers packed a coach section. To the German POWs, in a more spacious compartment with their white guards, “this was the funniest thing. They were laughing and looking up there at us, standing on top of each other practically,” Franklin remembered. Similarly, in a 1944 letter to the NAACP, Private Harold Hardy wrote that it was “tragic” that the Germans could “laugh at columns of our troops walking separately from the white soldiers. I know what is in thier ayrian minds. Ha, ha, thier saying, ‘the black yank is only good as a work horse’” [sic]. The POWs’ observations undermined America’s claims to a moral high ground, gave Nazis a sense of undue relief, and were just plain humiliating.

Vermell Jackson, who worked at the all-Black USO in Hattiesburg, Miss., during the war, says she remembers hearing soldiers talk about German POWs receiving better treatment. Jackson, 92, says she never witnessed that for herself, and—to a degree—she even sympathized with the POWs she saw around Hattiesburg. They were “in the same position our troops were in in their country,” she says. She understood that “they had been drafted into it, they didn’t just go walk out and join” the German army.

She retains that sympathy even now, after seeing how her husband was treated when he returned to Mississippi from the Pacific theater. Once, two white men stood outside a bank to prevent him from depositing his service check. The men said they’d have to keep Black veterans “in their place,” lest their service had convinced the troops they deserved civil rights.

As the Harlem Renaissance poet Countee Cullen knew, the Army would be anything but an equalizer for most Black Americans. In the 1944 poem “Mad Song,” Cullen imagined the racist Mississippi Congressman John E. Rankin, and those of like mind, pledging loyalty to the Nazis over Black Americans. “I’d raise my hand in Holy Heil,” goes the poem, “March with the Nazi knee to knee…” All that matters, in this twisted anthem, is that “Hitler’s white like me.” 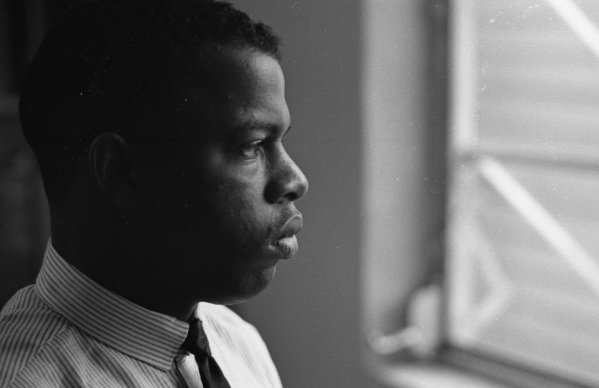 John Lewis’ Fight for Equality Went Beyond the United States
Next Up: Editor's Pick