America's Travel Guru Rick Steves Talks About Staying in One Place, What America Is Getting Wrong, and Dreaming of Escargots

This summer, I traveled. There were sun-soaked Italian hill towns; a sleepy Portuguese fishing village; a musty, centuries-old timber church in Romania. I saw it all from my couch, or sometimes the faded hammock on the porch. And I did it under the gentle narration of Rick Steves, the unassuming travel magnate whose childlike wonder and irreverent curiosity, seen in decades of cheap and cheerful guidebooks and travel TV shows, have introduced multiple generations of tourists to the charms of small museums and the pleasures of a walking tour.

Now, with the coronavirus pandemic making international travel obsolete, Steves—just like the rest of us—has been staying home. “You can’t go to Europe? Poor boy,” he reminds himself with a burst of laughter. “From my point of view, my life has been on an amazing trajectory until three months ago—too good to be true.” It’s the first time in 30 years that Steves is spending the summer in his hometown of Edmonds, Wash. Steves is on the road for more than four months in a given year, mostly in Europe. As the leader of one of the most successful U.S. travel franchises—it was on track to host 35,000 tourists for its 2020 guided tours—it has been hit hard by the global pandemic.

In the meantime, Steves has rediscovered what it means to hear birds in the morning. He’s brushed off his old trumpet and plays a nightly rendition of taps for the neighborhood as the sun sets over the Pacific. He’s learning to love his partner’s dogs, to chop vegetables, and to travel—as he puts it—from home. “That mindset when I’m traveling, to sit on a bench and watch the moon rise over the Alps?” he explains. “We have moonrises here also.”

Travel is sensory, but it is also, as Steves has preached for decades, inherently political. It’s this connection to the broader world–the needs of his local community, the political crisis facing America and the grander global challenges ahead–that fuels him now. “When people say, ‘God bless America,’ I say, As opposed to what? God not bless Canada? It makes no sense to me. This is not a high school football game. We don’t just root for our team,” he says. “The challenges confronting us from here on out are global and need to be addressed in a global mindset. You can’t build a wall and say, ‘Desperation here, happy rich people there.'”

Rick Steves’ Europe is an empire, with 100 U.S.-based employees and 150 freelance tour guides around the world. He hosts tours, publishes guidebooks, speaks at events and broadcasts TV specials. Rick Steves the person, however, is a dad. He’s a little silly. His hair is a little long. His kitchen, where he works, is decorated with a generic travel poster advertising the joys of Tuscany.

But behind this affable persona lies a steely, decades-long ambition. Born in Edmonds to a family of piano importers, Steves disappeared to Europe as a teenage backpacker–and pretty much never looked back, hosting scrappy tours for young people, giving travel seminars in Washington State and self-publishing his first guidebook, Europe Through the Back Door, in 1979. Today Rick Steves’ Europe books make up 25 of the 30 top-selling guidebooks in the U.S., and his dozens of annual tours make millions of dollars.

Not that this status helps him now. The pandemic has slashed the travel and tourism industry; estimates project a 35% global downturn in 2020. Steves predicts revenues of “practically zero” for his year ahead and is cautious about making any plans to return until business can go back to usual. He is committed to retaining his full-time staff, reducing their hours and pay while continuing their health care. It’s tough in a business based on volume. “For things to work in my world, you gotta pack the house, you gotta pack the plane, you gotta pack the hotel, you gotta pack the restaurant, you gotta pack the tour bus. Social distancing is just not a part of that equation,” he says. “When I go to France, I want to be kissed on both cheeks, three times.”

On my family’s first trip to Europe, a Steves book was our bible to choosing tiny trattorias, and his videos were our primers to navigating the twisting steps of the Cinque Terre. Nearly 25 years later, listless in quarantine, my family turned to Steves once again, playing episodes of his namesake show to while away the quiet evenings. “Remember that bruschetta?” we asked one another, watching Steves luxuriate in the flavor of tomatoes and garlic on fresh bread. “We were there too!” Watching Steves now is like peeking into a time capsule of a reality we didn’t realize was ending. Steves seems to live in a Europe untouched by the hordes of contemporary tourism, his optimism unmarred by the darkness of today’s politics or the superficiality of our consumerism.

Yet Steves is intimately aware of historical and present realities. One travel special explores fascism in Europe–something that, he thinks, has lessons even more applicable now. “I don’t think America does a very good job of learning from history,” he says. “When I was younger, I wanted to hurl people out of their comfort zones. All I had was a baggie of Valium to help people calm down,” he says with a bright laugh, referring to his early days as a tour guide leading small groups to funky hostels. “Now you support somebody, you hold their hand.” All of this, he insists, is connected to building a better world. “If I was to measure profit, it is on how transformational the travel is that I offer. That’s profit. If I look at a Trump rally, I would love to have a busful of those people on a bus in Europe. Because that would make my work more productive.”

Productivity hasn’t stalled for Steves in isolation. He recently finalized an Egypt special and published a book of nostalgic essays about Europe. He also doubled down on his philanthropy, pledging millions of dollars to offset climate change, address global hunger and support his hometown. He is a longtime campaigner for the decriminalization of marijuana in the U.S., a cause he sees as deeply tied to the structural inequalities that have reared up so visibly in recent months. “It’s not because I’m a pothead but because I think the laws are racist, non-productive, anti-civil liberties, anti-states’ rights,” he lists off. He is donating and helping raise money to improve voter access in the South.

He’s also sitting still, watching the humming-birds that flock to his bird feeder. “The main thing for us to do right now—and what America is flunking at—is being patient. Being diligent, embracing science, respecting the needs of the greater community,” he says. This summer he would have been meeting the family of his daughter’s fiancé on a three-week trip. It would have been his first real European vacation in 30 years, guided by his son.

But if even Steves can stay home and refocus his attention, well, maybe that’s a lesson for us all. “I always say, ‘If it’s not to your liking, change your liking.’ Be in that group that loves it while we stay home,” he urges. The TV shows, the books, and the blog posts and flashbacks: these things will carry us through. “When you travel, all you’re doing is racking up these huge banks of memories and experiences. I was walking home the other day and saw a little snail on someone’s fence,” he recalls, smiling, “and all I could think of was escargots.” 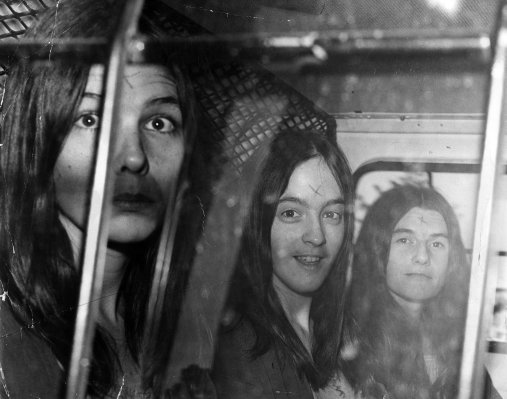 Did We Misread Charles Manson?
Next Up: Editor's Pick