'We Were the Sum Total of Our Work.' Activists Dorie and Joyce Ladner Recall What It Was Like to Organize With John Lewis in the 1960s

DORIE LADNER: My sister and I met John Lewis in Jackson, Miss., when we were students at Tougaloo College. He was one of the Freedom Riders who returned to Mississippi to settle some matters related to Parchman Penitentiary, where they were all jailed in 1961 after being arrested while defying segregation. They came back to pay their bonds and settle their legal issues. At the time, I was learning about non­violent action and community organizing, and after I started becoming involved with SNCC and the movement, I would often see him in meetings along with the rest of the group’s leaders—Diane Nash, James Bevel and others.

JOYCE LADNER: The public is attaching words like saint to John but we certainly didn’t view him that way. He was arrested a lot, back in the early years. You put your life on the line for a purpose, to get freedom for Black people who were denied the right to vote.

My sister once asked him, “John, why do you keep allowing these racists to beat you over your head?” It was the times in which we lived. It was not Black Lives Matter times, but a small band of young, Southern, mostly Black people fought against extraordinarily powerful people and structures and helped to dismantle them. We were the sum total of our work.

DL: I ended up dropping out of school in December of 1962 and went to work for SNCC’s Atlanta office, which was the size of a closet, because history was being made and I had to be a part of it.

We were all in our early 20s, trying to figure out what we were going to do with our lives and how we were going to survive, making $9.64 a week after taxes, moving from place to place not knowing where we were going to sleep the next night or eat. We lived off the Black community; the people fed us and that’s how we survived. That was the whole concept of SNCC and the movement for the most part. We were all of the same mindset. Dr. King had more elevation because of his stature—he was a family man of some means—but we were students.

Singing was one of our primary organizing tools. John couldn’t sing that well, but we all enjoyed singing. Singing brought joy and peace and calm to us; it’s very difficult to organize a group of scared people in Selma, Ala., and Albany, Ga., but once you start singing, everyone joins in a common chord and it gives you more power and strength.

JL: Before [he announced] his diagnosis, he came to a gala at which I was honored, and I noticed he was smaller. We were going to get together for lunch, but I never followed through. We embraced and he asked me about my sister and that was it. But he was the same John. The public John you saw speaking on those stages was not that different from John our friend.

DL: Growing up poor in Jim Crow Mississippi, our mother trained us to stand up for ourselves. John Lewis was soft-spoken so I tried to get a rise out of him sometimes. It was all in good fun, he laughed it off. John admired strong women; he admired intelligence. He knew I would go down fighting and he liked that about me, and I respected him for his beliefs, his nonviolence.

We learned from each other that, even though we all had our beliefs, we were in a common cause for justice and equality and we would do whatever is necessary to try to achieve those goals. —As told, in two conversations, to Olivia B. Waxman 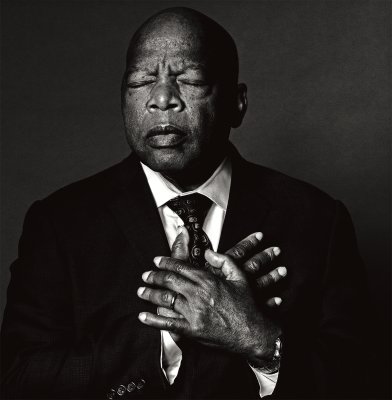