Fear City: New York vs The Mafia, a documentary series coming to Netflix on July 22, closely tracks the FBI’s takedown of the Mafia beginning in the 1970s—when the five main families of the Mafia held control over organized crime in New York City. Over three episodes, the series shows how federal agents worked to expose and eventually convict high-ranking Mafia members.

Fear City stands out in a crowded field of mob-related pop culture by giving voice to the FBI agents involved in the investigation into the Five Families and having them break down the challenges of infiltrating organized crime rings. The episodes also include interviews with former Mafia members, archival footage and evidence collected in FBI surveillance, along with filmed reconstructions, to show the cascading effects of the Mafia’s power in New York in the 1970s and 1980s.

Here’s what to know about the story that unfolds in Fear City.

Who were the Five Families and how did they come to control New York City?

The five Mafia groups included the Bonanno, Colombo, Gambino, Genovese and Lucchese families, making up what’s known as “The Commission,” who facilitated illegal activity across all five boroughs of New York. The heads and high-ranking members of each mob group were indicted in the 1985 Mafia Commission Trial, under charges of extortion, labor racketeering and murder, and the criminal trial essentially brought an end to The Commission’s golden era, though the Mafia still operates in the United States.

Throughout the 1970s and 1980s, the Mafia built control through intimidation and threats that allowed organized crime to thrive across several industries and facets of life, including control over labor unions and a large stake in construction and real estate, at a time when federal agents did not have a solid approach to investigating them. Each Mafia family was structured in a way to evade law enforcement—actual crimes were committed by “soldiers” working for the families; often the boss or the second-in-command of each family was too well-protected and had too little knowledge of the crimes to give an officer cause to arrest them.

“The lower-level guys were out there committing the criminal acts and kicking the money up to the higher-ups,” FBI agent Lin DeVecchio says in the series. “The average ‘wiseguy.’ We knew what he was doing. We’d put him in jail for a year but it didn’t solve the problem. Whatever their money-making scheme was went right on, virtually without interruption. ‘Cause there were a lot of guys waiting in the wings to take his place.”

Through the work of the wiseguys, or the foot soldiers for the Mafia families, the mob gained power in the 1970s and early 1980s—influencing the high crime rates in New York—as the bosses who wielded control were further insulated from legal trouble.

Former mobsters Johnny Alite and Michael Franzese describe lives filled with riches during the height of the Mafia’s success, with access to unlimited drugs, multiple properties across the country and private planes, among other excesses.

“Who’s gonna stop us? You felt like you had the power to do anything you want,” Alite says. “I didn’t feel New York was mine for the taking. I thought we already took it.”

While the Mafia was reveling in its control of New York, law enforcement struggled to get into their the tight-knit circles, agents say in the series. As Fear City shows, it took a lot of planning and very strategic placement of bugs to surveil high-ranking members of the Mafia to effectively gather any evidence against the families. Investigators found an opportunity to get at the bosses and leaders of each family through the Racketeer Influenced and Corrupt Organization (RICO) Act, which enabled law enforcement to try leaders of crime syndicates on charges that they ordered crimes to be committed. After years of simply arresting the mob’s foot soldiers without any lasting results, federal agents learned to use the RICO Act to establish proven links between mob bosses and their henchmen.

The series transforms into a mystery thriller when depicting the specific moments when law enforcement went after the mob. Federal agents bugged the homes of high-ranking Mafia members in an effort to prove that they were ordering criminal activity in New York. In one example, reenacted in a suspenseful scene in the series, an agent is on a mission to bug the house of Paul Castellano, the former head of the Gambino crime family. After law enforcement tampered with the TV reception in Castellano’s house, the agent pretended to be a cable repairman and installed a surveillance device in the TV under the guise of fixing the fuzzy connection.

Successfully bugging Castellano’s home was a significant step in collecting evidence to implicate him, says FBI special agent Joe O’Brien, who was tasked with monitoring the feed as part of the investigation. O’Brien learned that Castellano frequently spoke with others in the Gambino family about their “various rackets,” including finding out how the Mafia controlled labor unions throughout New York. In one clip of the tapes played in Fear City, Castellano is heard laying claim to a restaurant union: “It’s our union.”

By installing bugs in Castellano’s home and in other Mafia dwellings, federal agents discovered the existence of The Commission, and found that the Five Families operated as a giant criminal conglomerate—meaning they were able to be tried at the same time, under the RICO Act. In 1985, 11 organized crime associates were indicted, including each of the Five Families’ leaders. The indictments came from Rudy Giuliani, then the U.S. Attorney for the Southern District of New York and would later become Mayor, who also appears in the series.

“I always hated the Mafia,” he says. “They do terrible things to society. They began by exploiting Italian immigrants, like my grandfathers … The minute they established a little business, made a little money, [the Mafia would] come in and say, ‘Give us 30%.’”

Giuliani says that as he realized how much power The Commission held, he wanted to find a way to use the RICO Act to go after the bosses of each family in “one very big case.”

“If you can kill the monster from the head, this is our one chance to do it,” Giuliani says in the series.

The new application of the RICO Act against the Five Families worked—of the nearly dozen men who were tried, eight were sentenced to prison, with most receiving a sentence of 100 years. Former mob associates called the court’s decision “devastating.”

“It really, really put the icing on the cake for me,” Franzese says toward the end of the series. “When they can start doing that, this this life is in real trouble, real trouble.” 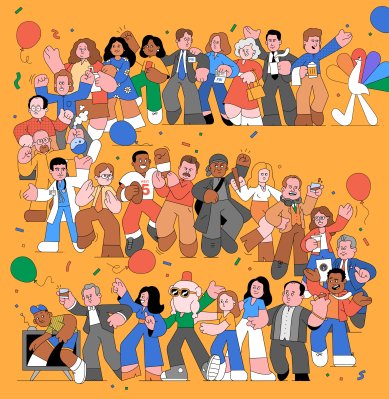 Where All Your Favorite Shows Are Streaming
Next Up: Editor's Pick