A body was discovered on Monday in a building that was burned in late May during protests in Minneapolis over the murder of George Floyd, the Minneapolis Police Department (MPD) said in a statement on Monday. The death is being investigated as a homicide, the statement continued.

On Monday morning, officials from the Minneapolis Police and Fire Departments, the Bureau of Alcohol, Tobacco, Firearms and Explosives and the Minnesota State Fire Marshal Division investigated “the burned wreckage” of a Max It Pawn at 2726 East Lake Street in Minneapolis, the MPD said in a statement. The pawn shop was set on fire in late May during the first few days of protests over the murder of George Floyd while in MPD custody.

“At that location, officials located the dead body of what is believed to be an adult male,” the MPD said in its statement. “Minneapolis Police Homicide Detectives have taken over the case.”

“ATF is working in close coordination with the Minneapolis Police Department in relation to this discovery,” the the Bureau of Alcohol, Tobacco, Firearms and Explosives said in a statement. “It is an open investigation and we’re not at liberty to share further information at this time.”

When asked why the body was discovered in July when the protests were in May, a spokesperson for ATF responded in an email: “There were more than 150 fires throughout the Twin Cities. ATF continues to work with our local, state and federal partners on the arson investigations and is following up on leads as they become available.”

On June 11th, 25-year-old Montez Terriel Lee was charged with arson for allegedly setting fire to the pawn shop on May 28. His federal public defender could not be immediately reached for comment. 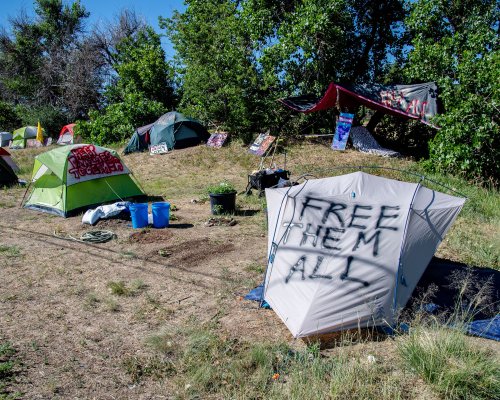 Inside the Effort to Get ICE Detainees Released
Next Up: Editor's Pick