Jennifer Eckhart, a former Fox News associate producer, and Cathy Areu, a former on-air analyst, filed a 39-page complaint in federal court in Manhattan in Monday. The suit alleges that Henry sexually harassed Eckhart on several occasions and raped her in a midtown Manhattan hotel room in 2017.

Fox News fired Henry, the co-anchor of its “America’s Newsroom” program, on July 1, saying it had received a complaint of sexual misconduct against him from a former employee’s lawyer.

Areu, perhaps best-known for serving as a liberal foil to conservative host Tucker Carlson on his show, said she was eager to graduate from occasional appearances to a full-time position at Fox. She accuses Carlson, Sean Hannity, “Media Buzz” host Howard Kurtz and a Fox contributor, Gianno Caldwell, of all holding out the possibility of advancement in exchange for sex and then retaliating by withholding opportunities after she refused.

“Based on the findings of a comprehensive independent investigation conducted by an outside law firm, including interviews with numerous eyewitnesses, we have determined that all of Cathy Areu’s claims against Fox News, including its management as well as its hosts Tucker Carlson, Sean Hannity & Howard Kurtz and its contributor Gianno Caldwell, are false, patently frivolous and utterly devoid of any merit,” the network said in a statement.

“We take all claims of harassment, misconduct and retaliation seriously, promptly investigating them and taking immediate action as needed — in this case, the appropriate action based on our investigation is to defend vigorously against these baseless allegations. Ms. Areu and Jennifer Eckhart can pursue their claims against Ed Henry directly with him, as Fox News already took swift action as soon as it learned of Ms. Eckhart’s claims on June 25 and Mr. Henry is no longer employed by the network.”

Catherine Foti, a lawyer for Henry, called the accusations “fictional” and said her client would present evidence showing Eckhart “initiated and completely encouraged a consensual relationship.” Foti said that evidence would include photos and communications Eckhart sent to Henry.

“The Me Too movement has helped to bring to light a number of injustices in our society, and everyone that has suffered deserves to be heard,” Foti said. “This is not one of those cases.”

The lawsuit is the latest legal headache for Fox News following a bevy of sexual harassment allegations that led to the ouster of former chief Roger Ailes in 2016. Former host Bill O’Reilly was also forced out of the network in 2017 amid similar allegations. Eckhart and Areu made explicit reference in their lawsuit to the network’s previous issues.

“Fox News would have the public believe that it is a different place from the Fox News that was run by former disgraced Chairman and CEO Roger Ailes,” they said. “Unfortunately, it is actually worse.”

Areu identifies herself in the suit as a former Fox News employee. But a spokeswoman for the network disputed that characterization, saying Areu was never an employee, only a guest. Eckhart claims she was fired in June, a few months after complaining to human resources about a “toxic work environment” at Fox News. She says she made the allegations about Henry on June 25, a day before her termination became effective.

Eckhart says the married Henry “preyed upon, manipulated and groomed” her from the age of 24 by imposing power over her career and forced her into having a sexual relationship with him before raping her. Areu says Henry also sexually harassed her by sending her “wildly inappropriate” sexual images and messages throughout the first half of 2020.

The women say Fox News received complaints about Henry during the 2016 internal investigation it began after the allegations against Ailes but continued to promote him anyway.

–With assistance from Christopher Palmeri. 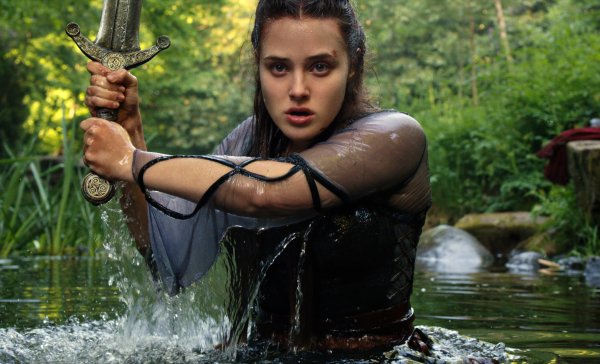 The Arthurian Legends Behind Netflix's Cursed
Next Up: Editor's Pick