Coronavirus Created a Backlog of Thousands Waiting for U.S. Citizenship. Will They Get It In Time to Vote?

Eduarda Alvarez was planning to take a vacation with her husband this year to celebrate finally becoming a U.S. citizen.

The retired nursing home staffer immigrated to the U.S. in 1986 from Nicaragua. She tried to become a citizen once before but failed to pass the interview in English. She decided to go through the process again, and in February, she was interviewed in Spanish, and passed. Then COVID-19 struck, and her naturalization oath was never scheduled, Alvarez says.

Now both her plans to celebrate and to vote in the November election are up in the air. She hopes to cast a ballot for Democratic presidential candidate Joe Biden, largely because she does not like how the Trump Administration has treated immigrants. She’s been checking the mailbox at her home in Maryland every day for a notice that her swearing-in ceremony is on the books. “This is the only way one can help those who don’t have a voice,” says Alvarez, 71, in Spanish. “One vote makes a difference, no?”

In February, the Pew Research Center estimated more than 23 million U.S. immigrants would be eligible to vote, comprising about 10% of the national electorate. Now, because of the pandemic, Alvarez has landed on a long list of people who are worried their citizenship won’t come through in time to vote in the high-stakes election. Critics of the Trump Administration, which has aggressively pursued an anti-immigrant agenda, believe it is not moving fast enough on that backlog in a deliberate effort to disenfranchise immigrant voters.

“This is an effort to keep them from voting in the fall elections,” says U.S. Senator Martin Heinrich of New Mexico. “I think given everything this administration has done, everything the President has said, and the fact that we have people like Stephen Miller in charge of immigration in the White House, I think we have to view it that way.”

On March 18, U.S. Citizenship and Immigration Services (USCIS) suspended face-to-face services in response to the coronavirus pandemic, postponing many naturalization ceremonies in the process. The agency resumed public services in its field offices on June 4, but in the meantime a backlog of 110,000 people waiting to take their citizenship oath built up.

Now that USCIS has resumed in-person services, it says it’s prioritizing that list and aims to clear it by the end of July. Between June 4 and July 12, the agency said it has completed nearly 87,000 oaths, leaving about 23,000 like Alvarez still waiting. Immigrant advocates say the number of people whose citizenship process has been derailed this year is much larger than the people awaiting a naturalization oath. There are many others who, for example, are awaiting the in-person interview that is required before they can take the oath.

If it doesn’t get through its backlog, come August 3, the agency — which largely operates based on fees — is likely to face furloughs due to funding problems, and all of its operations, including naturalization ceremonies, will be disrupted again, though to what extent is unclear. “In the event of a furlough, we will continue to conduct naturalization ceremonies, but we anticipate it will be on a more limited basis,” says Joe Sowers, a spokesman for USCIS, in an email to TIME.

There have been bipartisan calls in Congress asking USCIS to take up remote swearing-in ceremonies, both to help move the process along more quickly and to make it safer given the public health hazard that comes with in-person meetings. One bipartisan letter from members of the House of Representatives even suggested the oath be waived. But USCIS has resisted, arguing that federal law states these must be conducted in person, that they must occur publicly, and that virtual ceremonies would create logistical hurdles. Critics view this as evidence that the Trump administration is trying to discourage immigrant voters.

“I think they can legally do it, and I think they should start to look for ways to do it,” says Ur Jaddou, who was counsel at USCIS during the Obama administration and is now director of DHS Watch, a watchdog and immigration advocacy organization. She argues that the longer USCIS waits to implement virtual ceremonies, the fewer people they will be able to help in time to vote, given how long it takes to design and stand up a new system.

Immigrant advocates acknowledge that the wide variety of coronavirus conditions across the country make it difficult to implement any sort of blanket policy, short of remote naturalization ceremonies. As states’ voter registration deadlines draw near, some field office directors and judges have used the flexibility they have and turned to creative options on an ad hoc basis, such as drive-through and parking lot swearing-in ceremonies.

In the U.S. District Court of the Eastern District of Pennsylvania, lawful permanent residents filed a class action lawsuit asking for relief of their situation in time to register to vote in Pennsylvania by the state’s deadline of October 19, 2020. Trina Realmuto, executive director of the National Immigration Litigation Alliance, one of the groups involved in the lawsuit, says that in response, the Philadelphia USCIS office naturalized “a few hundred people in June and expect to get through the backlog in July.” (Realmuto said NILA is waiting for an update on those figures.)

The process of becoming a U.S. citizen is cumbersome. It can involve paperwork, fees, biometrics, an interview, and the oath. It also involves patience: USCIS data from fall of 2019 to spring of this year showed the average processing time for an application for naturalization was a little over eight months. Some immigrants end up waiting years. When the long-awaited swearing-in ceremony does happen, it’s a happy occasion when friends and family gather in support of the new citizen, often in settings like baseball games and auditoriums. They are moments that stick with people for life.

In election years, the number of applications for citizenship historically goes up. Studies suggest that naturalized citizens vote at higher rates than their U.S.-born counterparts. In fiscal year 2019, USCIS naturalized 834,000 new citizens, which the agency said was an 11-year high.

“Voting is not only one of the main rights that new citizens gain, but also it’s one of the biggest motivations for many of them to become U.S. citizens,” says Pablo Blank, manager of immigration integration at CASA of Maryland. And this particular election, he says, is different: “For them it’s very important to step up and vote for a different administration, for a different President who will respect immigrants, who will see that immigrants are able to make this country great.”

That doesn’t mean that higher numbers of immigrant voters will necessarily swing the election in a particular direction. Immigrants are a voting bloc that is, by nature, vastly diverse, with different beliefs and political preferences. “We can’t say that it would absolutely determine the outcome of specific elections one way or the other,” Melissa Rodgers, director of programs at the Immigrant Legal Resource Center. “What we can say for sure is that it would enrich our democratic process immensely to have new citizens voting in the election this year.” 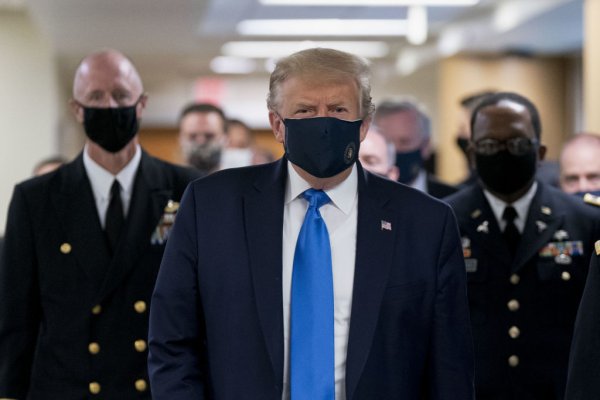 Why Trump is Losing His War Against COVID-19 Bad News
Next Up: Editor's Pick