Kerry Kennedy: My Father and Uncle Were Both Murdered on National TV. I Still Have Always Opposed the Death Penalty

Sylvester Edwards expresses his opposition to the death penalty during a protest near the Federal Correctional Complex where Daniel Lewis Lee is scheduled to be executed on July 13, 2020 in Terre Haute, Indiana. Lee was convicted and sentenced to die for the 1996 killings in Arkansas of gun dealer William Mueller, his wife Nancy, and her 8-year-old daughter Sarah. He is scheduled to be the first federal prisoner put to death since 2003.
Scott Olson—Getty Images
Ideas
By Kerry Kennedy
Kerry Kennedy is the president of Robert F. Kennedy Human Rights, an international social justice organization based in D.C.

When I learned my father had been murdered, I went into my room, laid on my bed and cried.

The only thing I could think to do was what he and my mother taught me and my brothers and sisters to do when times were difficult, and we couldn’t make sense of things. I prayed.

I prayed for my family.

I prayed for my dad.

Then I prayed, “Dear God, please don’t let them kill the man who killed Daddy.”

I didn’t want any other families to have to go through this pain. I didn’t want a mother to lose another son, and if this man had children, for them to lose their father. I knew violence would not bring back my father, nor would it bring justice or relief, only more pain.

I didn’t know then that the death penalty in our country was another institution of racial violence, that the color of a victim’s skin and the jurisdiction of the court determined, more than any other factor, whether this brutality was meted out. As a human rights lawyer and former prosecutor, I know this today more than ever.

Fifty-two years after my father’s death, the Supreme Court has moved to further embed state-sponsored killing in our society, clearing the way for the federal government to resume executions for the first time since 2003.

This comes at the same moment that our country is grappling with violence and upheaval as a result of systemic racism against Black Americans, who are all too often deliberately killed by a government that pledges to protect all of its people. If the United States is to truly move forward, it must also openly air the many shameful truths about America’s racist past and present through an open, honest dialogue.

Along with conversations about dismantling and defunding police departments, we must examine our country’s racist approach to capital punishment. Murders of white people, particularly by Black people, results in capital prosecution in far higher percentages than murders of people of color. In a 2011 report to the U.N. Human Rights Committee, the U.S. government even acknowledged an “overrepresentation of minority persons, particularly particularly Blacks/African Americans, in the death row population.” People of color continue to be excluded from capital juries at alarming rates.

The anti-Black violence of capital punishment in our country does not reflect the values expressed in our constitution, what we believe as a people, the way we want to treat our children and the way we think of ourselves.

I oppose the death penalty because it kills those members of our society whose rights should be held sacrosanct—the innocent, those with intellectual disabilities, people living in poverty and the Black Americans who have been subjected to racism throughout our history.

Both my father and my uncle were murdered in cold blood on national television. As hard as I try to avoid it, I have seen those appalling images of their last moments of life again and again and again. I oppose the death penalty because it calls forth our basest instincts for vengeance.

I oppose the death penalty because all too often it is meted out on the innocent. I know the rate of wrongful convictions is high from reading the studies. But I also know it firsthand—and the trauma it visits on both the accused and on communities—because both my first cousin and my brother-in-law were wrongfully convicted of murder.

My reaction to the death penalty as a child was an instinctive reaction, not a tutored one. But I am proud to know my father, who made his career as a prosecutor, shared these sentiments. “Whenever any American’s life is taken by another American unnecessarily, whether it is done in the name of the law or in defiance of the law, by one man or a gang, in cold blood or in passion, in an attack of violence or in response to violence—whenever we tear at the fabric of life which another man has painfully and clumsily woven for himself and his children, the whole nation is degraded,” he said.

We must act now to stop the carnage. It does not do justice, and it will not bring back my father. It will only take someone else’s. 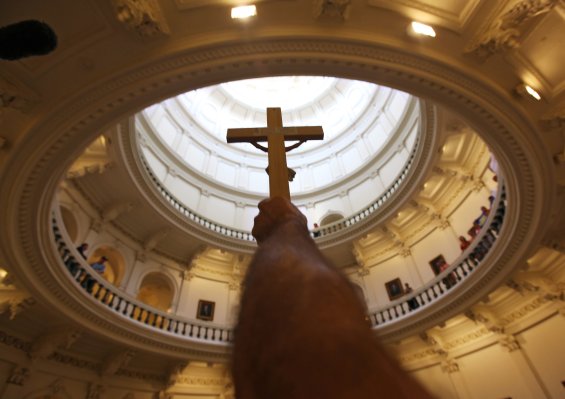 COVID Deaths Surge Under 'Pro-Life' Leaders
Next Up: Editor's Pick