Eighty-seven people were arrested and each charged with a felony Tuesday after protesting outside the home of Kentucky Attorney General Daniel Cameron to demand justice for the death of Breonna Taylor, the Louisville Metro Police Department (LMPD) confirmed to TIME.

Protesters gathered on Cameron’s lawn for a demonstration on Tuesday afternoon, chanting Taylor’s name and asking Cameron to bring criminal charges against the police officers who shot her, according to videos posted on social media. Cameron’s office is conducting an investigation into Taylor’s death.

As the protest continued, dozens of police officers surrounded those participating, the Courier Journal reports. Police reportedly told the protesters that it was against the law to remain on the property, and then arrested those who refused to move. (Police also said Cameron had requested the protesters be removed from his property.)

In a statement obtained by TIME, police said that “[d]ue to their refusal to leave the property and their attempts to influence the decision of the Attorney General with their actions,” each protester was charged with a felony and two misdemeanors: “Intimidating a Participant in a Legal Process (Class D felony), Disorderly Conduct 2nd Degree (Class B misdemeanor), and Criminal Trespass 3rd Degree. (Violation).”

“The stated goal of today’s protest at my home was to ‘escalate,'” Cameron said in a statement issued Tuesday night. “That is not acceptable and only serves to further division and tension within our community.”

“Justice is not achieved by trespassing on private property, and it’s not achieved through escalation,” his statement continued. “It’s achieved by examining the facts in an impartial and unbiased manner. That is exactly what we are doing and will continue to do in this investigation.”

Taylor, a 26 year-old Black EMT, was shot eight times in her own apartment by three LMPD officers executing a “no-knock” warrant as part of a narcotics investigation in March. No drugs were found in her apartment and she had no criminal history.

One of the officers involved in the shooting was fired from the police force on June 23, but none of the officers have yet been charged with a crime. Taylor’s death received renewed attention amid mass demonstrations against police brutality and systemic racism that swept the U.S. following the murder of George Floyd, a 46-year-old Black man, in Minneapolis on May 25.

Since protests began, Louisville has banned the use of no-knock warrants.

The social justice organization Until Freedom organized the protest, which included the group’s co-founders — activists Linda Sarsour, Tamika Mallory and Angelo Pinto — all of whom were arrested, per the Journal. (Until Freedom did not respond to TIME’s request for comment.) The protest began earlier that afternoon and moved from Louisville’s Ballard High School to Cameron’s lawn around 4:30 p.m. ET, the police said.

The arrested protesters also included Houston Texans wide receiver Kenny Stills, per the Courier Journal, as well as NAACP of Minneapolis President Leslie E. Redmond. On Tuesday, the NAACP of Minneapolis tweeted that Redmond had been “wrongfully arrested for demanding justice for Breonna Taylor.” (Neither Redmond nor Stills’ agency, Athletes First, responded to TIME’s request for comment.)

The rapper YBN Cordae, Love & Hip Hop star Yandy Smith and Real Housewives of Atlanta star Porsha Williams were also among those arrested, according to updates shared across their and Tamika Mallory’s accounts.

On Wednesday, Mallory shared video footage of some protesters being released, but noted in her Instagram post’s caption that many others, at the time of her writing, remained in jail. She said that protesters would remain at the jail until all those arrested had been released, and would be paying bail money where needed. (The Journal reports that more protesters were freed throughout the day on Wednesday, thought it is not clear if all have been released. The LMPD did not immediately respond to TIME’s request for comment Wednesday evening.) 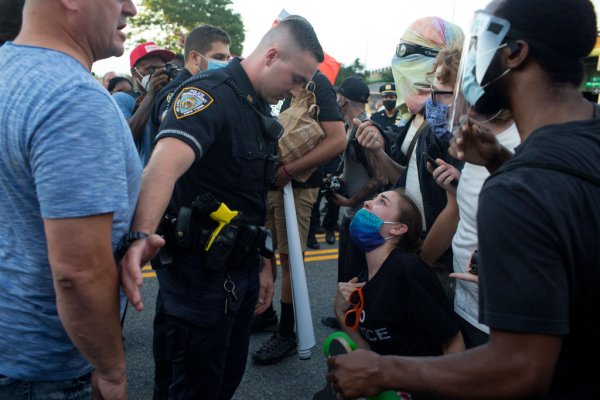