Demonstrators hold signs during a protest against Georgia’s law banning most abortions after six weeks outside of the Georgia State Capitol building in Atlanta on May 25, 2019. A federal judge permanently struck down the law on Monday, ruling that it violates the U.S. Constitution.
Elijah Nouvelage/Bloomberg—Getty Images
By Madeleine Carlisle

A federal judge permanently struck down Georgia’s controversial law banning most abortions after six weeks on Monday, ruling that it violates the Fourteenth Amendment of the U.S. Constitution.

The controversial law, which was passed in 2019, would have banned most abortions after a doctor detected fetal cardiac activity, which can happen as early as six weeks into a pregnancy, sometimes before a woman realizes she is pregnant. The law included some exceptions for victims of rape and incest but only if they had filed official police reports.

On Monday, District Judge Steve C. Jones ruled that the law infringed upon constitutional rights, including those established by the 1973 Supreme Court decision Roe v. Wade and the 1992 decision Planned Parenthood v. Casey.

“In sum, the undisputed material facts in this case lead to one, indisputable conclusion: that Section 4 of H.B. 481, by prohibiting a woman from terminating her pregnancy upon the detection of a fetal heartbeat, constitutes a pre-viability abortion ban,” Jones wrote in his decision. “As this ban directly conflicts with binding Supreme Court precedent (i.e., the core holdings in Roe, Casey, and their progeny) and thereby infringes upon a woman’s constitutional right to obtain an abortion prior to viability, the Court is left with no other choice but to declare it unconstitutional.”

“It is in the public interest, and is this court’s duty, to ensure constitutional rights are protected,” Jones continued.

The suit, SisterSong v. Kemp, was brought by advocacy groups and abortion providers including Planned Parenthood and the American Civil Liberties Union (ACLU) of Georgia.

“This win is tremendous, and [it] also makes a very bold statement,” said Monica Simpson, the executive director of the suit’s lead plaintiff SisterSong Women of Color Reproductive Justice Collective, in a statement. “No one should have to live in a world where their body and reproductive decision-making is controlled by the state. And we will continue to work to make sure that is never a reality in Georgia or anywhere else.”

In a statement to TIME, the office of Georgia Gov. Brian Kemp said: “We will appeal the Court’s decision. Georgia values life, and we will keep fighting for the rights of the unborn.”

The controversial law faced widespread criticism, including from several famed filmmakers and actors who threatened to pull out of Atlanta’s multi-billion dollar film industry if the law was enacted. The law was initially going to take effect at the start of 2020, but Jones placed a preliminary injunction blocking the law in October 2019.

“The district court blocked Georgia’s abortion ban, because it violates over 50 years of Supreme Court precedent and fails to trust women to make their own personal decisions,” said Sean J. Young, the legal director of the ACLU of Georgia, in a statement. “This case has always been about one thing: letting her decide. It is now up to the state to decide whether to appeal this decision and prolong this lawsuit.”

Monday’s ruling came the same day a federal judge temporarily blocked a bill in Tennessee that would ban most abortions after the detection of fetal cardiac activity. At least seven other states passed similarly restrictive abortion laws in 2019, all of which are currently stopped in the courts. 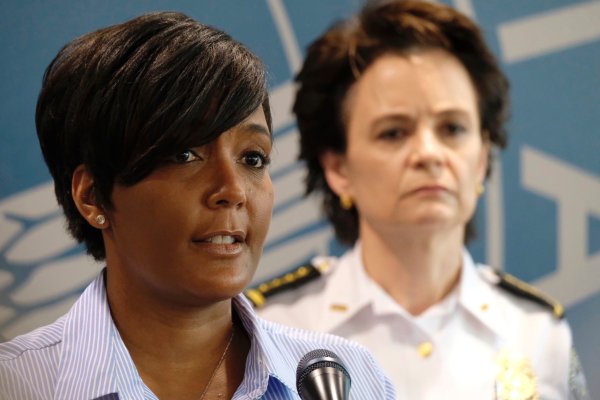 Atlanta Mayor Tests Positive for COVID-19
Next Up: Editor's Pick