Members of Mirman Baheer, a nationwide women’s literary society meet in an office in Kabul, the capital. Mirman Baheer meets in a different secret location each week.
Lynzy Billing
By Lynzy Billing

On a frosty February morning in Kabul, Lima Aafshid’s face glows in the pale blue light of her smartphone. She is reciting the words of 13th century Afghan poet Jalaluddin Rumi. Speaking in Dari, her voice is soft, yet clear.

For the past six years, Aafshid has been a member of Sher-e-daneshgah, the Kabul University Poetry Association. The group is mostly made up of students in their twenties, members of the city’s rapidly growing middle class. Their meeting place is a hip, bustling cafe in Pole-e-surkh, Kabul’s vibrant 3rd district. Cigarette smoke swirls around the dimly-lit room as young men and women huddle together and discuss their poetry around a small wood-burning stove.

“You must have poetry inside of you,” Aafshid says. “It’s not something that you can just learn with experience. I have been writing since I was a child, and when I started studying journalism at Kabul University I joined Shar-e-Daneshgah to receive critiques of my poetry from others.” Aafshid says that the meetings have introduced her to a tight-knit cadre of like-minded young people. And during the global COVID-19 pandemic, technology has helped them continue to meet.

Afghanistan has 33,908 confirmed cases of COVID-19, and 957 fatalities as of July 10, yet the true number of cases is likely much higher due to a shortage of testing kits. Since March 28, when the Afghan government brought in lockdown measures in the capital in an attempt to prevent the spread of the virus, Sher-e-daneshgah has started hosting virtual poetry sessions, enabling its members to maintain a sense of community despite the health crisis. Aafshid says that the virtual groups have proven extremely popular. “We started a group on Telegram which now has more than 200 members. In this group, we share our poems one day a week, just like we did in our face-to-face meetings.”

Another informal poetry group called Saped-dar also holds a Virtual Poetry Night on Telegram, where members join via video to discuss poetry with different themes each week, from love and war to everyday life. “The group was created because of it as a place for young people to socialize together and learn about poetry,” says Aafshid.

Since the fall of the Taliban in 2001, mobile technology and Internet access in Afghanistan has grown at a breakneck pace. A 2018 report found that more than 10% of the population are using social media apps, up from 0.1% in 2004. A 2019 study found that over 90% of Afghans have at least one member in their household who owns a mobile phone and 46.3% have an Internet connection.

Even before the pandemic, that was useful for young women like Aafshid, who want to share their perspectives without fearing their safety. Aafshid shares her poetry on social media under a pseudonym, having faced online threats in the past on Facebook. “When people started to harass me, I made a Telegram channel, and now I publish my poems there. I can choose who can follow me and can view my poems and on Telegram people can’t leave comments,” Aafshid says. “Now I am in control.”

Afghanistan remains one of the most dangerous countries in the world for women and ranks 168 out of 189 countries in the U.N.’s Gender Development Index. According to the Women and Children Legal Research Foundation, a Kabul-based research advocacy group, nine out of 10 women in urban communities face at least some form of physical or verbal harassment. Despite a peace deal signed in February between the U.S. and the Taliban, violence against women persists. On May 12, militants attacked a Kabul maternity ward, leaving 24 dead, including 16 young mothers and 2 newborns.

Amid the violence and the isolation of lockdown, Aafshid says that online poetry groups offer a vital means of maintaining mental health. “All generations have been witness to war in Afghanistan,” she says. “Poetry offers a means for us to release our stress.”

The first edition of 'Shariat', a monthly magazine published on March 22, 1998 by the Afghan Taliban. Inside, an article by a female writer praising the talent of Persian and Pashtun women poets.
Lynzy Billing

Long before the pandemic, poetry societies led by women had sprung up in underground spaces. Mirman Baheer, a nationwide women’s literary society, was formed in 2010 by Sahira Sharif, an Afghan politician, author, and women’s rights advocate.

Sharif recognized that anonymous communities were one of the few safe avenues for Afghan women to share firsthand accounts of their lives. Mirman Baheer meets in a different secret location each week, allowing women to share experiences that would otherwise remain hidden.

In rural areas many women still write in secret, using pen names. Mirman Baheer offers a space for rural women to share their deepest thoughts through a type of coded oral poetry called a landay. Originating thousands of years ago, landays are usually anonymous, and composed of two lines of 22 syllables. One notable example is by warrior war poet Malalai:

Malalai, an Afghan heroine who famously fought during the second Anglo-Afghan war, called out this landay during the 1880 battle of Maiwand. Locals believe Malalai’s landay motivated the fighters to ultimately defeat the British invaders.

These days, Mirman Baheer hosts a few hundred members aged 13 to 55 in clubs across a handful of Afghan cities and provinces including Kandahar, Khost and Jalalabad. Younger poets are mentored by professors and poets. During the pandemic, physical gathering has become difficult, but the founding members have come up with a solution: live streaming on Facebook. Members can join from the safety of their homes, participating in conversation and literary criticism.

Pakiza Arezo, a former literature student who now works with the Ministry of Information and Culture in Kabul has been a member of Mirman Baheer since the group’s founding. “Our members are mostly Pashtun girls from the provinces whose families disapprove of them writing and reading poetry in front of men. Their society is more conservative,” she says. “So we formed a women’s only group.”

For these women from rural areas, who overwhelmingly lack access to the Internet or smartphones, participation is still possible. “For women who aren’t able to join in the group discussions in person, because of the distance, issues around security or family permission, we will listen to and discuss their poetry by telephone,” Arezo says.

Azero says that growing access to the Internet is helping to transform the prospects of female poets in rural areas and to offer opportunities for their work to be shared widely and, importantly, anonymously if the poet chooses. “Social media has encouraged women to share their ideas, and opinions, and offered a space for women to be more open minded,” she says.

Technology has enabled Afghan women to share their experiences in ways that were not available to them before, agrees Farzaneh Milani, an Iranian-American author and professor of Persian literature and Women’s Studies at the University of Virginia. She says technology has played a key role in the movement for women’s equality in the country. “Although the ties between women and poetry have been deep and strong in Afghanistan, digital online poetry sharing is an ultimate act of unveiling for women in the borderless cyberspace,” Milani says. “Giving presence to the unseen and the voice to the unheard.”

In Kabul, Aafshid is optimistic about the opportunity that poetry brings for Afghan women’s rights. But she also recognizes that fundamental societal attitudes must shift to meet this change. “Women have a right to shape the policies that determine the political and cultural landscape in their own country,” says Afshid.

To get there, she says, Afghan women’s perspectives needed to be recognized. “Women need to feel safe to share their voices publicly. Until then, they will only find safety in anonymity online and among one another.” 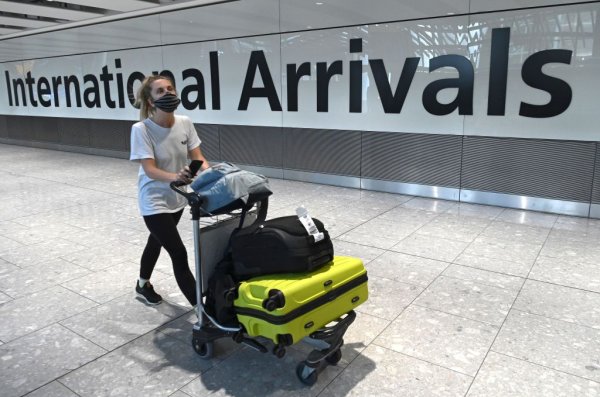 U.K. Government Relaxes Quarantine Rules For Travelers From 58 Countries
Next Up: Editor's Pick